Early reports throughout the beginning of the week have signaled good news in Tennessee’s direction this weekend. Tennessee will be hosting a massive recruiting weekend, full of Volunteer commits and targets as Tennessee looks to bolster its class.

On Tuesday afternoon, five-star offensive lineman Francis Mauigoa confirmed on Twitter that he will be visiting Tennessee this weekend.

Going to be at Knoxville this weekend🍊 @Vol_Football

Mauigoa, a native of San Bernardino, California, is unquestionably one of the top prospects in the entire class. According to 247 Sports’ composite rankings, Mauigoa is listed as the No. 8 overall prospect in the class, the No. 2 offensive tackle in the class, and the No. 2 player from the state of Florida. Mauigoa transferred to IMG Academy in Bradenton, Florida before his sophomore season, where he currently plays today.

Tennessee and Mauigoa have been in close contact recently this spring as the Volunteer coaches have shown the five-star considerable attention. However, it isn’t just the coaches that are putting in the work. When Tennessee received a commitment from five-star quarterback Nico Iamaleava in March, Iamaleava instantly became the face of the class, which has helped Tennessee get a foot in the door with certain recruits. After an interview from On3 Sports’ Chad Simmons with Mauigoa this week, it definitely sounds like the two California kids are in contact.

“Nico [Iamaleava] talks about creating a whole new team at Tennessee,” Mauigoa said to Simmons in the interview. “He talks about the skill guys being there, but to win national championships at Tennessee, they need linemen like me. That is what they are missing he said.”

Tennessee has had to battle from behind in this recruitment, though. On Mar. 14, Mauigoa announced a Top 13 that did not include Tennessee. Now, more than two months later, Tennessee is the favorite for the five-star lineman.

Francis Mauigoa is a unit on the football field standing at 6-foot-5 and weighing in at 330-pounds. His outstanding play on the field has already drawn him more than 30 offers, including powerhouses such as Alabama, Florida, Miami, Oregon, and many many more.

According to On3 Sports, though, Tennessee looks to be the favorite in Mauigoa’s recruitment even before the Vols get him on campus this weekend. On3 Sports’ Recruiting Prediction Machine currently has Tennessee leading the way at 50.4 percent, followed by USC and new head coach Lincoln Riley at 43.2 percent. 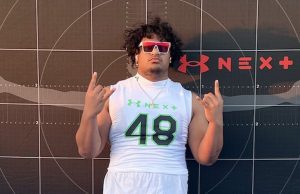 See Also from RTI: Tennessee Athletics Were The SEC’s Best In 2021-22 School Year

“A massive lineman out of American Samoa that moves different than most people his size,” 247 Sports’ Southeast Recruiting Expert Andrew Ivens wrote about Mauigoa in April. “At one point considered himself more of a pass rusher by trade, but has started to embrace the idea of protecting quarterbacks for a living instead of trying to sack them. Tested in the upper percentile for someone that’s pushing 6-foot-5, 330 pounds as he went 5.3 on the lasers in the 40-yard dash and added a 4.7 in the short shuttle the spring before his junior year. A bully of sorts that uses his raw power to simply overwhelm defenders. At his best when he can just fire out of his stance and drive block as he uses a wide base to establish leverage. Not one to give up on a play and will try to find extra work. Can gain depth with his kick step and win with a strong punch, but must improve as a pass blocker, especially if he’s going to be asked to protect the corner on Saturdays. Spent much of junior season at IMG Academy working at right tackle.”

Tennessee looks to be targeting a few terrific prospects at IMG Academy this cycle. In addition to Mauigoa, Tennessee is also heavily recruiting five-star wide receiver Carnell Tate, who is also trending towards Tennessee in the latest projections. The Vols are also making a play for Mauigoa and Tate’s teammate, four-star wide receiver Devin Hyatt, who is the younger brother of current Vol wideout Jalin Hyatt.

Francis Mauigoa comes from an athletic family, too. Mauigoa’s brother, Frederick Mauigoa, was a former offensive lineman for the Carolina Panthers and Cincinnatti Bengals after a collegiate career at Washington State. Mauigoa’s other brother, Francisco Mauigoa, was a former three-star prospect that signed with Washington State in the class of 2021.