HOOVER, Ala. — Tennessee’s long awaited opening game at the SEC Baseball Tournament was drama free. The Vols took a first inning lead and jumped on rival Vanderbilt with a big third inning on their way to a 10-1 victory.

Here’s everything to know about Tennessee’s fourth win over the Commodores this season.

Ortega and Gilbert Set The Tone

Hitting in the two-spot, Jorel Ortega made his first plate appearance with a runner on first. He immediately set the tone for the game, working a 12-pitch walk while fouling off six two-strike pitches.

“I mean, it was awesome,” Drew Gilbert said of the at-bat. “Not only does it help Jorel, but I think it helps the guys behind him too. They had to throw everything at him and that helps us. We kind of used that kind of info that Jorel gave us basically with his at-bat and used it for our next at-bats, and me and Jordan and Trey can help piggy-back off that.”

Jordan Beck grounded into a double-play to briefly give Vanderbilt hope of getting out of the first unscathed, instead Drew Gilbert lined the first pitch he saw into left-center field for a RBI double.

Fast forward to the third inning when the top of Tennessee’s order was up again. Seth Stephenson gave the Vols a leadoff runner via a single up the middle and Ortega quickly fell behind 0-2.

Ortega — who has been Tennessee’s best bat with two strikes —punished an 0-2 mistake deep into the left-center gap for a RBI double.

“I’m going to go first instinct or word association, just passion,” Tennessee head coach Tony Vitello said of why Ortega is so effective with two strikes. “I know I’ve said that a lot when you guys ask me questions about Jorel, but why fans like being around him, he’s just got passion for life. Why he’s a good baseball player, he’s got passion for playing baseball. And then I could go on and on why these guys light up when you ask them a question about Jorel. It’s kind of the same thing. It’s not like he doesn’t have a skill set and it’s not like he’s not a smart kid and other things, but that’s the word that’s going to be — he could be back in the program when he’s 40 and come back in the locker room — I’ll be retired — but he can come back in and that’s the first word that’s going to come to everybody’s mind.”

Vanderbilt starter Devin Futrell retired Beck via fly out and once again, Gilbert lined the first pitch he saw the other way for a RBI hit.

In their first two at-bats, Ortega saw 15 pitches and reached base twice with two-strikes. Gilbert saw two pitches and recorded a pair of RBI hits.

Both set the tone for what proved to be a fantastic offensive performance from the Big Orange.

Before Tennessee opened up a six-run lead in the bottom half of the third inning, Vanderbilt had a chance to take tie the game or take the lead in the top half of the inning.

A one-out Davis Diaz walk followed by a wild pitch gave Vanderbilt a runner in-scoring position. The Commodores came inches close of tying the game when Enrique Bradfield Jr. roped a hard ground ball down the first base line.

Tennessee first baseman Luc Lipcius made a spectacular diving stop to rob Bradfield of a RBI hit, and after walking Javier Vaz, Blade Tidwell struck out Spencer Jones to preserve the lead.

The Vols had a much more comfortable seven-run lead in the sixth inning when Vanderbilt loaded the bases with two-outs, but once again an elite defensive play kept the Commodores off the scoreboard.

Vanderbilt’s Carter Young hit a light dribbler to third base that looked poised to be an RBI hit. Instead, Trey Lipscomb made a fantastic, attack bare handed play and Lipcius made a nice scoop to get Young at first and strand the bases loaded.

“There was also a couple situations in the game where if you look at the box score, it looks like it was one-sided but it was not,” Vitello said. “There was moments in that game, there was a lot of moments, and our guys responded during those moments in quality fashion, and a lot of those were on defense. You ask any coach, any sport, they want the defensive part to kind of come first and to go well, and fortunately with good coaching and a lot of hard work, these guys have played good defense for us all year long. It’s something we take pride in.”

That one play wouldn’t have gotten Vanderbilt back in the game, but a double or single after that would have gotten them back in striking distance. Instead, the Vols’ comfortable lead remained.

Good, Not Great Start For Tidwell

Blade Tidwell didn’t look like the untouchable pitcher that we saw last weekend when he retired all nine batters he faced out of the bullpen at Mississippi State.

The tall-right handed pitcher struggled with his command at times — as he does when he struggles — but it wasn’t the story of his outing as it has been at times this year. A few close pitches went against Tidwell in at-bats he surrendered walks.

Carter Young ended the shutout with a solo home run in the fifth inning. After Bradfield singled two batters later, Tidwell’s day was done at 76 pitches. If this was an NCAA Tournament game, Tony Vitello might have let the sophomore pitch through it, but the Vols’ skipper played things safe with Tidwell’s arm and gave him the early hook.

“Tonight he started against a team that played really well to beat Mississippi and dynamic throughout the lineup, not just Bradfield,” Vitello said. “We needed that. So we’ll see what’s going on moving forward, but now that he’s back in a rhythm and a routine and he’s gotten himself where he’s more healthy than ever — I said it when we went out there and talked on the mound when he was coming out of the game, now we’ve kind of got a weapon that we can choose to use as we see fit.

A Few Odds And Ins 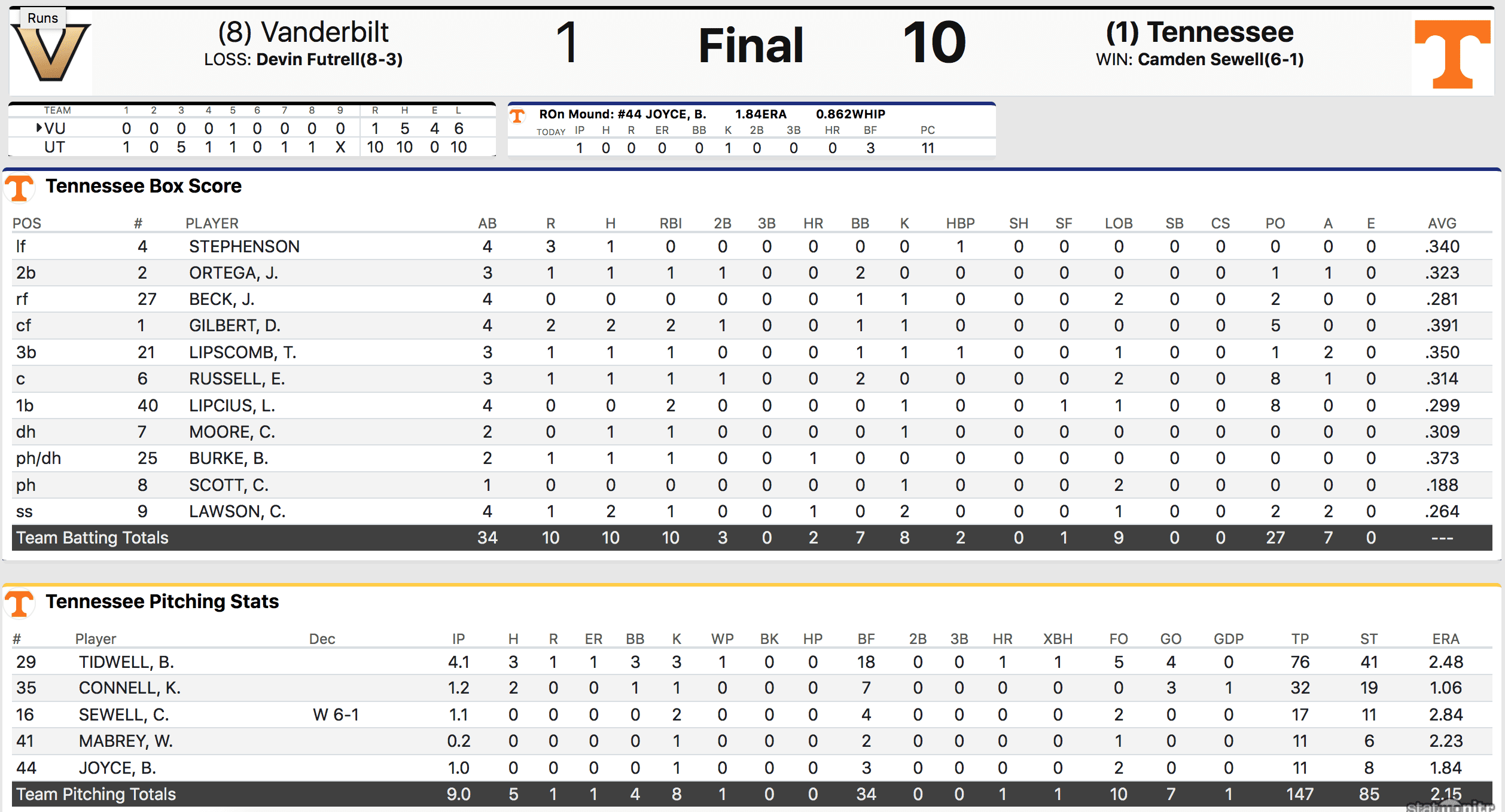 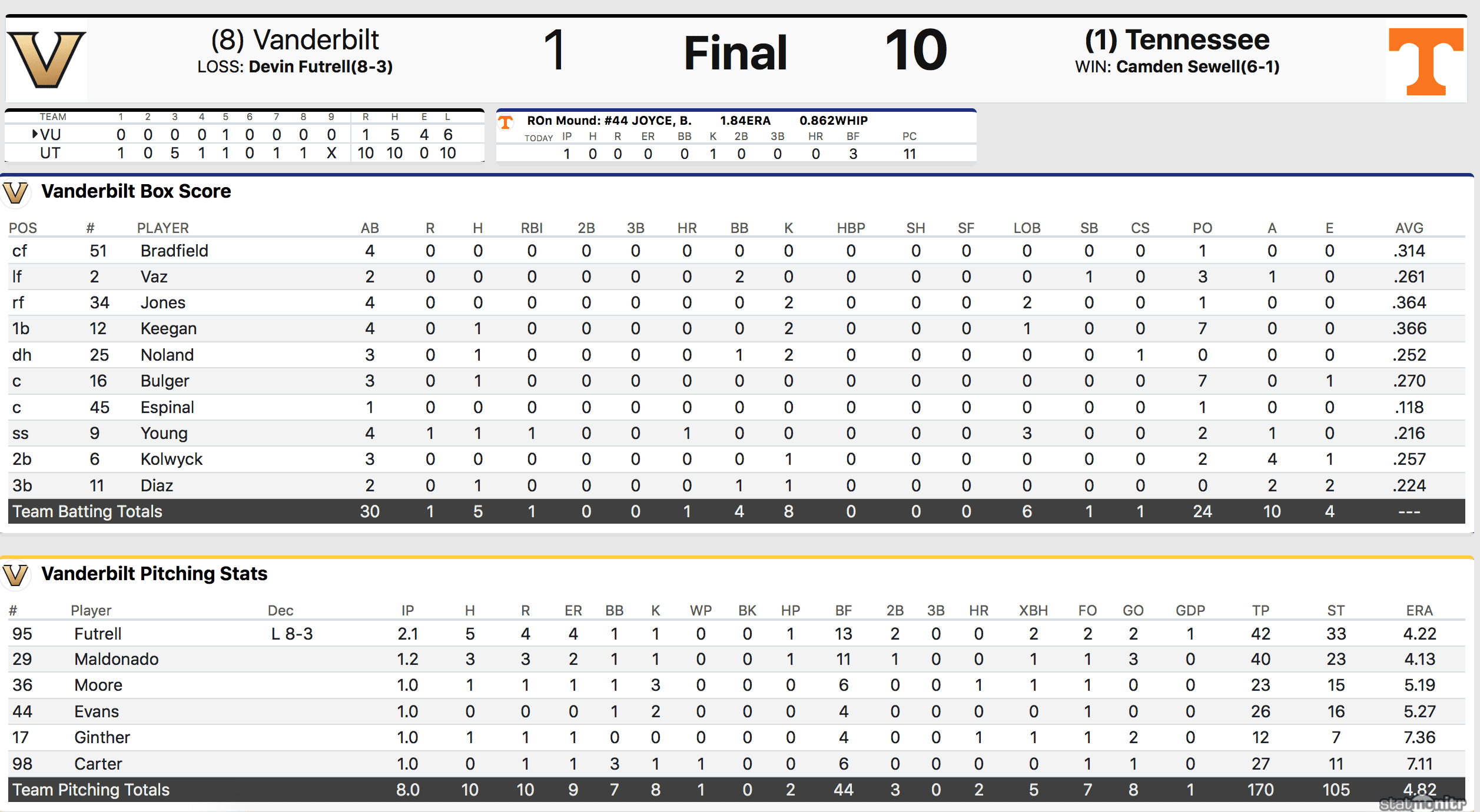 Tennessee returns to the field at the Hoover Met for the night cap of four-games on the day. First pitch is 30 minutes after the conclusion of the 5:30 p.m. ET game.

The Vols will face the winner of Thursday’s night cap between Kentucky and LSU.