HOOVER, Ala. — Tennessee’s offense was uncharacteristically quiet for seven innings Saturday night at the Hoover Met. However, the bats created separation late and that was more than enough for Chase Burns.

The freshman pitcher dealt out of the bullpen, muzzling a red-hot Kentucky lineup for 4.2 innings in Tennessee’s, 12-2, win.

Here’s everything you need to know about Tennessee’s SEC Tournament Semifinals win over Kentucky.

Tennessee freshman Chase Burns entered the game with one-out and a runner on third in the bottom of the fourth inning. The Vols were leading 2-0 with Kentucky threatening to end the shutout.

The Gallatin, Tennessee native had other ideas. Burns struck out Adam Fogel for a crucial second out and after Devin Burkes worked a walk and stole second, the right-handed freshman fanned Jacob Plastiak to exit the jam.

The Tennessee fans — which outnumbered their Kentucky counterparts 10 to one — erupted as did Tony Vitello and the Vols’ dugout.

Tennessee dugout, and Tony Vitello, were fired up. pic.twitter.com/1lhK3vgRYd

Things went sideways for Burns in the fifth inning when Kentucky scored two runs to tie the game. The freshman didn’t get much help from his defense or slow throwing motion as Kentucky stole two bases in the inning and a two-out dropped third strike allowed the tying run to score.

From there, Burns was phenomenal. The freshman struck out eight batters in 4.2 innings pitched and allowed just one baserunner after the fifth inning.

“Burnsy, he came in and was lights out,” Tennessee shortstop Cortland Lawson said of Burns. “His slider was as elite as it’s ever been. It’s a big time spot for them (Burns and Drew Beam) being freshman.”

“I wrote on an index card, and it never works out this way, Beam four, Burns four and Todd Helton Jr. (Redmond Walsh) for one,” Tennessee head coach Tony Vitello said. “We kind of separated it there so we went to a different lefty (Wyatt Evans) who threw about as good as anybody could throw. As far as going to Burns in that particular situation, Beam — you could argue who’s been the best guy all year long, but it’s pointless because we’re in the here and now, but as far as strikeout options, Burns is a guy who is probably more oft to strike somebody out then someone else and we had a runner on third base.”

The decision also backs up Tennessee’s recent pitching moves that indicate they’re willing to use nearly all of its pitchers in multiple roles.

Kentucky Holds Tennessee’s Lineup At Bay For Most The Night

The Kentucky regular season series was Tennessee’s lineup’s worst of the season. The vols tallied just 11 runs in three games including a pair of two-run performances.

Despite Magdiel Cotto — a sophomore with a sub-six ERA and 29.1 innings pitched on the season — starting for Kentucky, the Wildcats once again limited Tennessee’s potential offense.

However, Kentucky made some costly mistakes that you can’t make against Tennessee and the Vols capitalized.

Tennessee broke the tie in the eighth inning as singles from Luc Lipcius, Jordan Beck and Trey Lipscomb loaded the bases with one-out.

The Vols reclaimed the lead when Zack Lee plunked Jorel Ortega. Lee gave himself a chance to get out of the inning by striking out Evan Russell for the second out.

However, Beck scored on a wild pitch and after the Wildcats intentionally walked Blake Burke, Cortland Lawson roped a double into left center field to give Tennessee a 6-2 lead. That’s too many mistakes against this Tennessee team.

Tennessee’s eighth inning was just the start of its late game offense. The Vols added six runs in the ninth inning with a Blake Burke three-run moonshot putting the exclamation point on the win.

“Their guys were really good. There was a breaking point,” Vitello said of the difference in the offense in the first seven innings and last two. “To me, the way their pitchers grinder and filled some innings in is what should get them in a regional. The guys they were using were doing the same thing the other guys they’ve been using— just filling the gap. It just ran out for them towards the end. A little of that is credit to our guys, a little bit of it is just kind of a fact.” 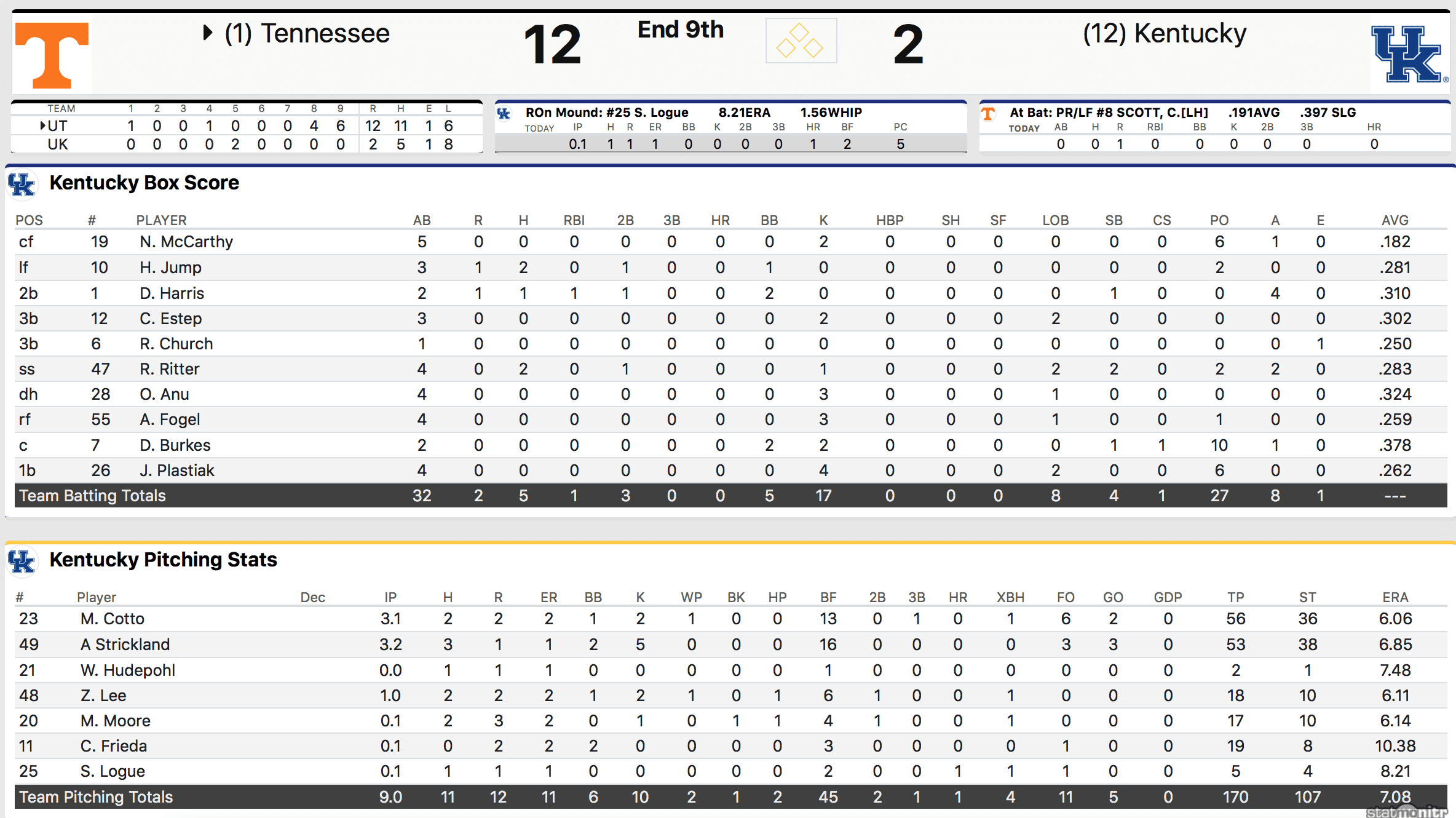 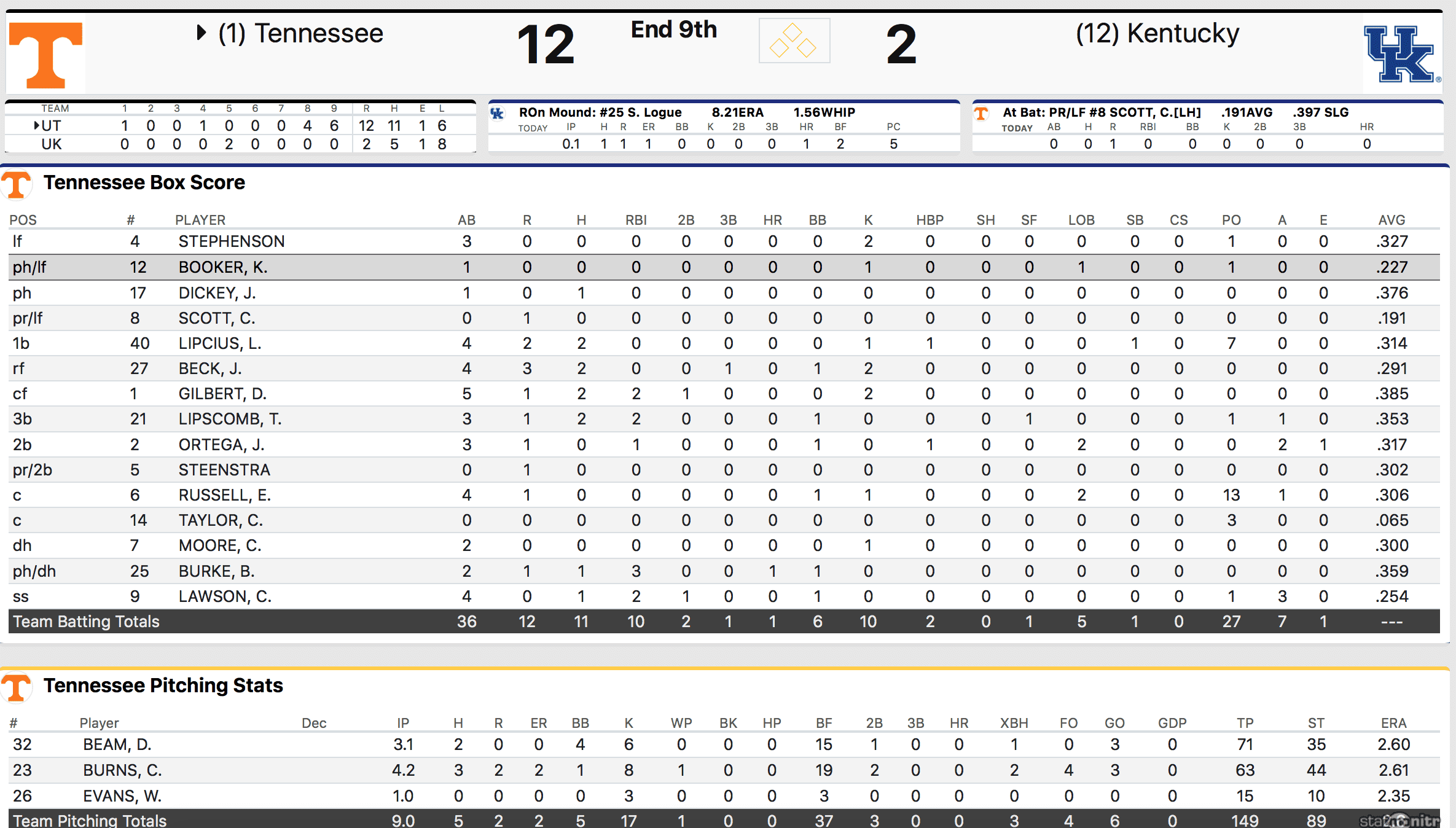 The Vols are looking to avenge last season’s SEC Tournament Championship loss to Arkansas and earn the program’s first conference tournament title since 1995.