The Vols never trailed in the 2022 SEC Tournament thanks in large part to dominant pitching. RHP Camden Sewell continued that trend, dealing against the Gators in his first start of the season.

Here’s everything you need to know about the SEC Tournament Title game.

Florida coach Kevin O’Sullivan gave the ball to left-handed pitcher Carsten Finnvold in Sunday’s championship game. Finnvold entered the day with a 16.62 ERA in just 4.1 innings pitched on the season.

However, Finnvold gave Florida all they could have asked for in a 4.2 inning outing. The soft-throwing freshman held Tennessee scoreless through the first four innings, and stranded Cortland Lawson on third after a leadoff triple in the third inning.

“We all know (Tennessee) can hit a plus fastball. This is something different,” O’Sullivan said in his in-game interview on ESPN2.

“Sometimes it doesn’t guarantee you, but sometimes when something is unique, you have to adapt to it, and during that little period, if you have to adapt or adjust, that means you might be frustrated,” Tennessee head coach Tony Vitello said. “You can either get in that frustration pool and dive in head first and wade around in it or you can kind of just figure out what’s going on and keep going. Again, I think Luc, man, he’s well spoken, smart kid, he’s an engineer. I think he said it, you kind of just got to keep playing and ride out the storm. You can’t go too far in one direction or another.”

Finnvold could only hold the Vols’ overpowered offense down for so long and when his defense let him down, Tennessee capitalized.

Evan Russell reached second on a throwing error to leadoff the fifth inning and Blake Burke singled to give Tennessee runners on the corners with nobody out. Seth Stephenson broke the tie two at-bats later, lying down a perfect bunt for a successful squeeze play.

Gilbert had struggled at the plate in his first two at-bats and even fell down 0-2, but the Vols’ most emotional player rose to the occasion as he often does, roping a double over left fielder Wyatt Langford’s head to clear the bases.

“I think in that situation you try to learn from your previous two at-bats,” Gilbert said. “Obviously once it gets two strikes, just kind of competing at that point. You’ve got a lot of things going around you, crowds getting into it, just trying to slow my heart rate down as much as I can and just stay within my swing.

If Langford read the ball quicker, it likely would have been an inning ending fly out and the Gators would have remained right in the game. Instead, Tennessee led by a comfortable four-runs at the game’s halfway point.

Tennessee’s Camden Sewell grew up a Florida fan. Maybe that’s why the senior has been so dominant against Florida. The Cleveland, Tennessee native was fantastic in a SEC Tournament Semifinals start against the Gators last season and in 4.1 innings of relief in Gainesville earlier this season.

Earning his first start of the season Sunday, Sewell shoved against the team he grew up cheering for. The right-hander pitched to contact, striking out only one but offering no free passes in five shutout innings.

“So a direct text of, ‘I want the ball,’ Vitello said of why he started Sewell. “We’ve got options and then you’ve also got guys that are saying, give me the ball. As a player you’re crazy to not at least ask. But the way he did it and knowing the kid, it was what he wanted to do.”

Sewell has longed to be a starting pitcher in his Tennessee career, but has accepted his bullpen role every season. The senior made the most of his coach’s trust Sunday, dealing on the Vols’ way to their first SEC Tournament Championship in 27 years.

“It meant a lot,” Sewell said. “I wanted it to say the least, a lot. I didn’t actually find out until this morning, so whenever I found out, it was like, all right, it’s time to go, and I just enjoyed every minute of it.

Tennessee recorded just two strikeouts in its win as the Vols’ pitchers leaned on their defense. That defense was phenomenal in the blowout win.

Trey Lipscomb’s diving stop and throw that robbed Florida of a run in the fourth inning was the only truly spectacular play Tennessee’s defense made. However, they were rock solid throughout the game, making a number of challenging plays look easy.

Lipscomb, in particular, was fantastic defensively in the win.

“The amount of plays they made today was really special to see,” Sewell said. “There were a lot of plays I thought that were getting through, balls getting through the outfield, and Corty (Lawson) and Trey (Lipscomb) and Jorel (Ortega), Luc (Lipcius), everyone was making plays, so it was really awesome to be a part of.”

Jorel Ortega committed Tennessee’s only error with two-outs in the ninth inning. 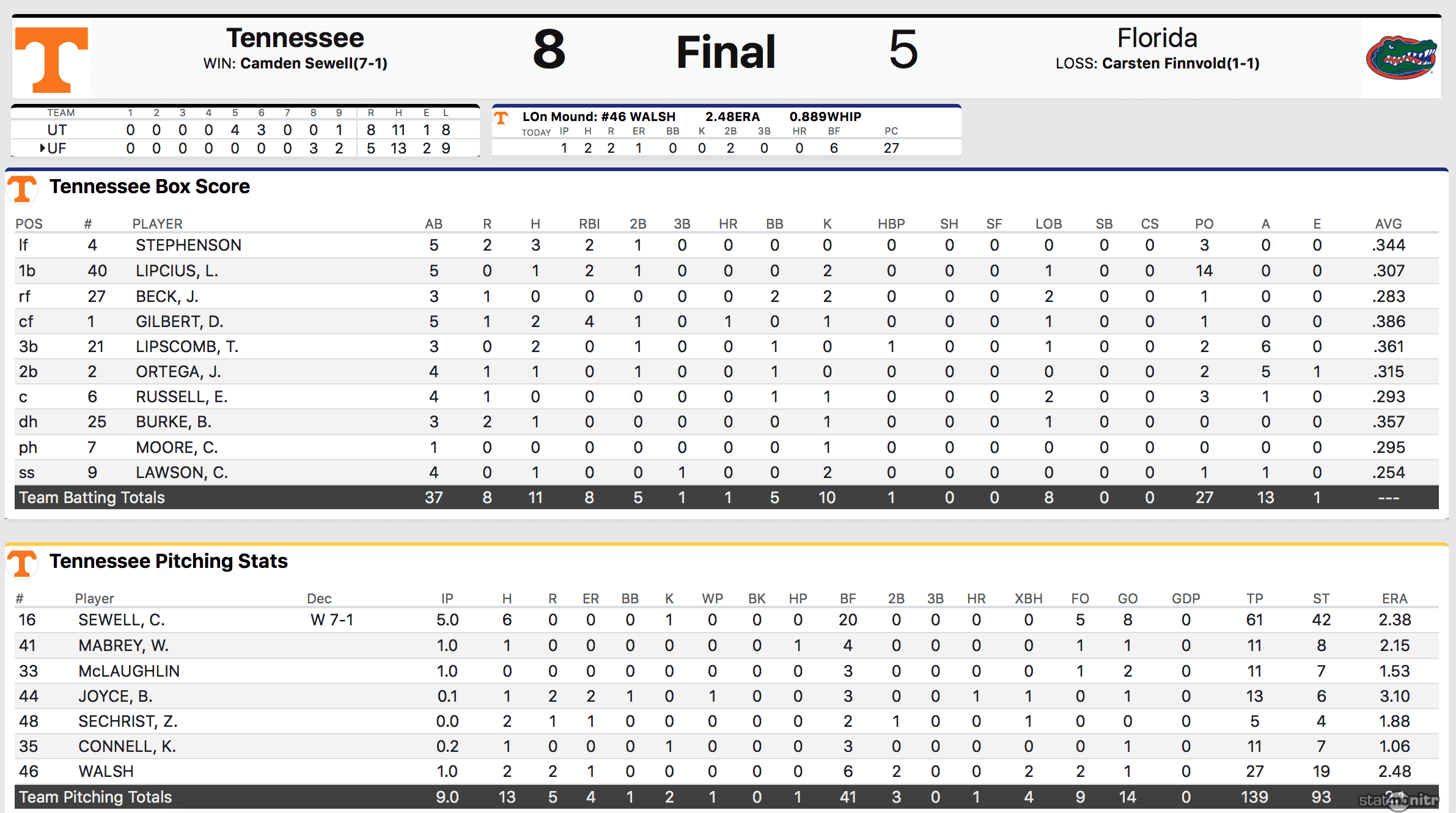 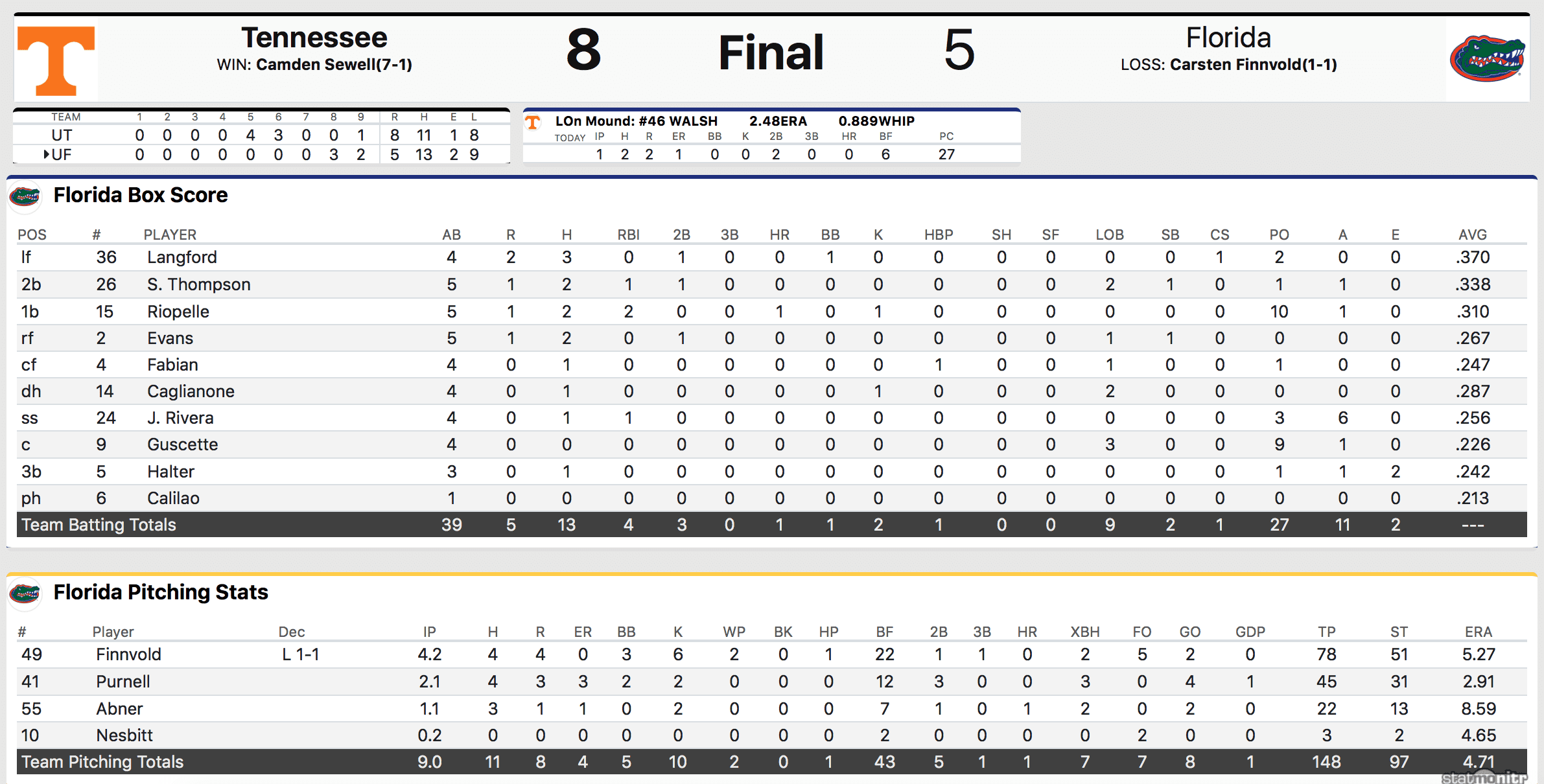