Tennessee Athletic Director Danny White has seemingly confirmed the next steps of the Neyland Stadium Renovation project on Thursday. According to a tweet from White on Thursday afternoon, Tennessee looks to be planning for two separate V-O-L-S signs atop Neyland Stadium on opposite sides of the south jumbotron.

The single V-O-L-S sign was a staple of Neyland Stadium until its removal during the 1999 season. White and the Vols’ athletic department gave Tennessee fans a treat by putting the letters in front of the stadium for game days last year, only creating more desire to see the letters back atop the stadium.

Now, according to the tweet from White, it looks like Tennessee is planning to bring back the sign and add in one more for good measure. 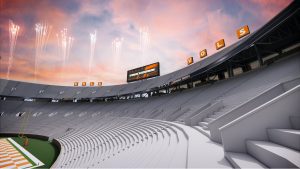 I’m learning that there’s sentimental value in these letters! Thought y’all might enjoy a bit of nostalgia today – they’re outside Gate 21 if you want a picture. I’m gonna go out on a limb and guess that y’all want us to include the Vols letters in our Neyland renovation plans…? pic.twitter.com/M6jcbWEDsa

As fans eagerly wait for the 2022 football season in Knoxville, Tennessee’s Neyland Stadium continues to go through renovations leading into the season. The entire process will be a multi-stage project, but fans will see immediate changes next season including a party deck and jumbotron added to the north endzone.

While the final design of the project isn’t confirmed, Tennessee has used both the white and orange-background letters before.

Going off of Vols’ Athletic Director Danny White’s tweet on Thursday, it looks like the V-O-L-S letters will return to Neyland Stadium after more than 20 years on the shelf.