KNOXVILLE, Tn — Tennessee outlasted No. 3 seed Campbell in an offensive shutout Saturday night. The Fighting Camels jumped out to a 4-0 lead before Tennessee took the lead in the fifth inning and withheld a handful of Campbell pushes to win, 12-7.

Here’s everything to know about a wild win.

Opponents have recorded just two earned Chase Dollander since the sophomore returned from injury on May 3. Campbell scored four runs, batted around and ran the SEC Pitcher of the Year from the game in the third inning Saturday night.

Campbell fouled off 13 pitches in the third inning including six two-strike pitches from Tennessee’s strikeout leader. Dollander recorded the second out with a runner on second in a 2-0 game and that’s where things escalated.

The Georgia Southern transfer couldn’t get out of the jam as a Cortland Lawson made a two-out fielding error allowed a run to score. After Drake Pierson worked a walk, Ty Babin singled to right field off the edge of Jorel Ortega’s glove.

After Dollander surrendered another walk to load the bases his day was done. LHP Kirby Connell got a huge fly out to strand the bases loaded.

“Starting with Do (Chase Dollander), we’re not in this situation without him,” Vitello said. “If you can hold down their lineup at any moment, you did well. He did it for the first two innings. Things unfolded in unfortunate fashion. He wasn’t going to be the same guy with that high pitch count, so we went and got him.

Campell’s four-run third inning took the life out of the sold out Lindsey Nelson Stadium. It was the second biggest home deficit Tennessee has faced this season and came against a pitcher that looked flawless the last month.

Tennessee’s offense quickly answered the bell. Back-to-back one-out hits from Drew Gilbert and Trey Lipscomb ended the shutout. Jorel Ortega followed it up with a towering home run that cleared both porches in left field.

The Vols wouldn’t completely erase the deficit in the fourth, but they stifled Campbell’s momentum and sparked the home crowd.

Tennessee didn’t wait much longer to erase the deficit as Drew Gilbert punished a hanging, 0-2, breaking ball for a go-ahead home run. The three-run shot cleared the right field wall by at least 50-feet and gave Tennessee a, 6-4, lead.

After Campbell pulled within one run in the seventh inning, Blake Burke gave the Vols some insurance with a no doubt opposite field home run.

“I feel like it goes back to a mentality V (Tony Vitello) has instilled in us, this punch back, right? Anytime someone scores, our mentality is to punch back,” Gilbert said. “I think it’s as simple as that.”

Lindsey Nelson Stadium is a hitter friendly park — especially in June — but Tennessee’s offense answered the bell when the Vols needed it.

Connell came in the game and got out of the bases loaded jam in the third inning and it was just the start of the left-handed pitcher’s strong night.

Campbell finally got to Connell in the seventh inning thanks to a Drake Pierson two-run home run. Still, it was Connell’s best outing of the season and it came at the biggest time. The Vols needed a pitcher to steady the ship and the South Carolina native did just that.

Blake Burke’s 14th home run of the season pulls him even with Alan Cockrell and J.P. Arencibia for the most home runs from a freshman in program history.

Evan Russell came in as a defensive sub in the eighth inning, tying him with Pete Derkay atop Tennessee’s all time games played list.

The Vols broke a record too, winning their 54th game of the season. It’s a new program record. 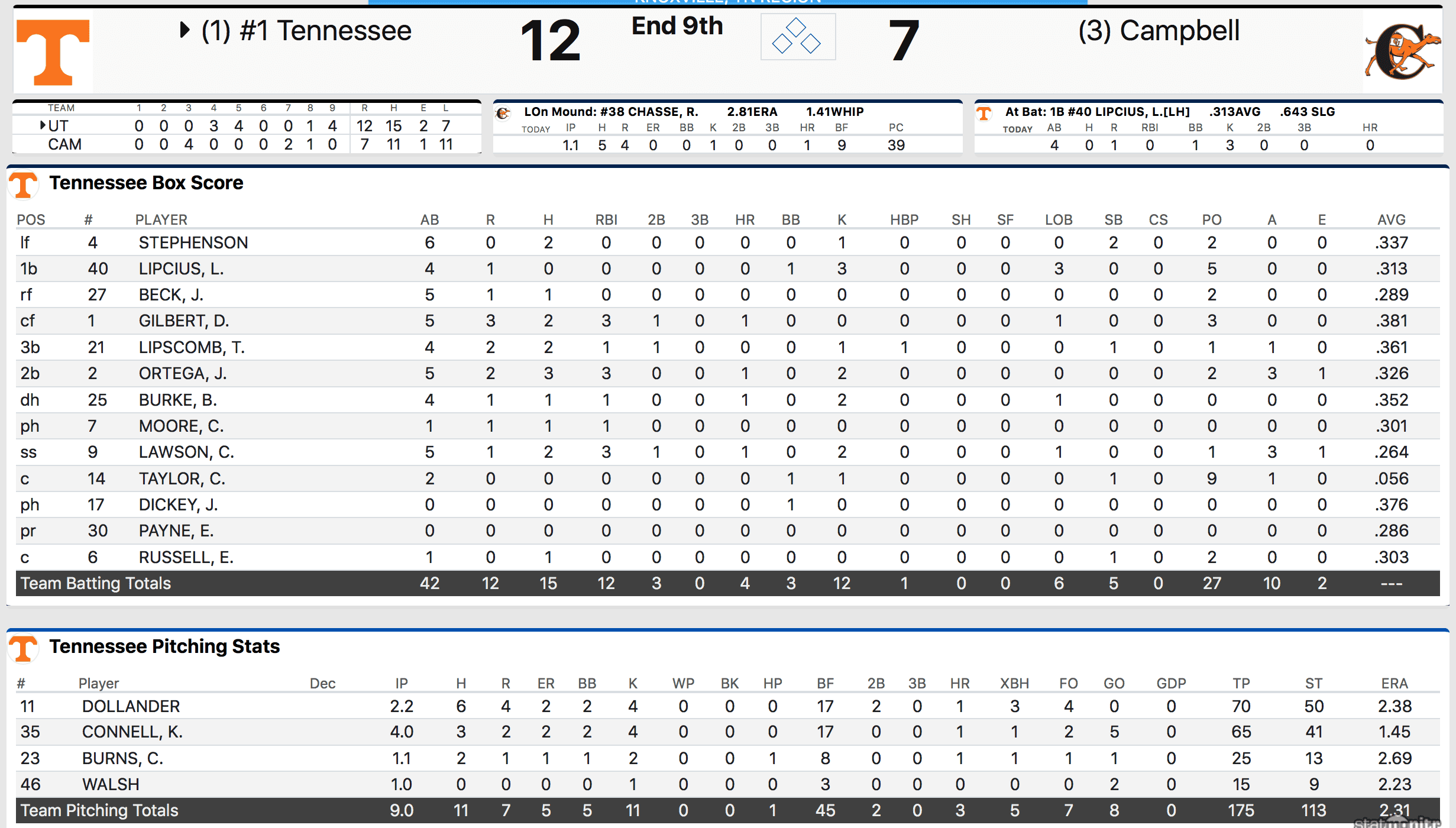 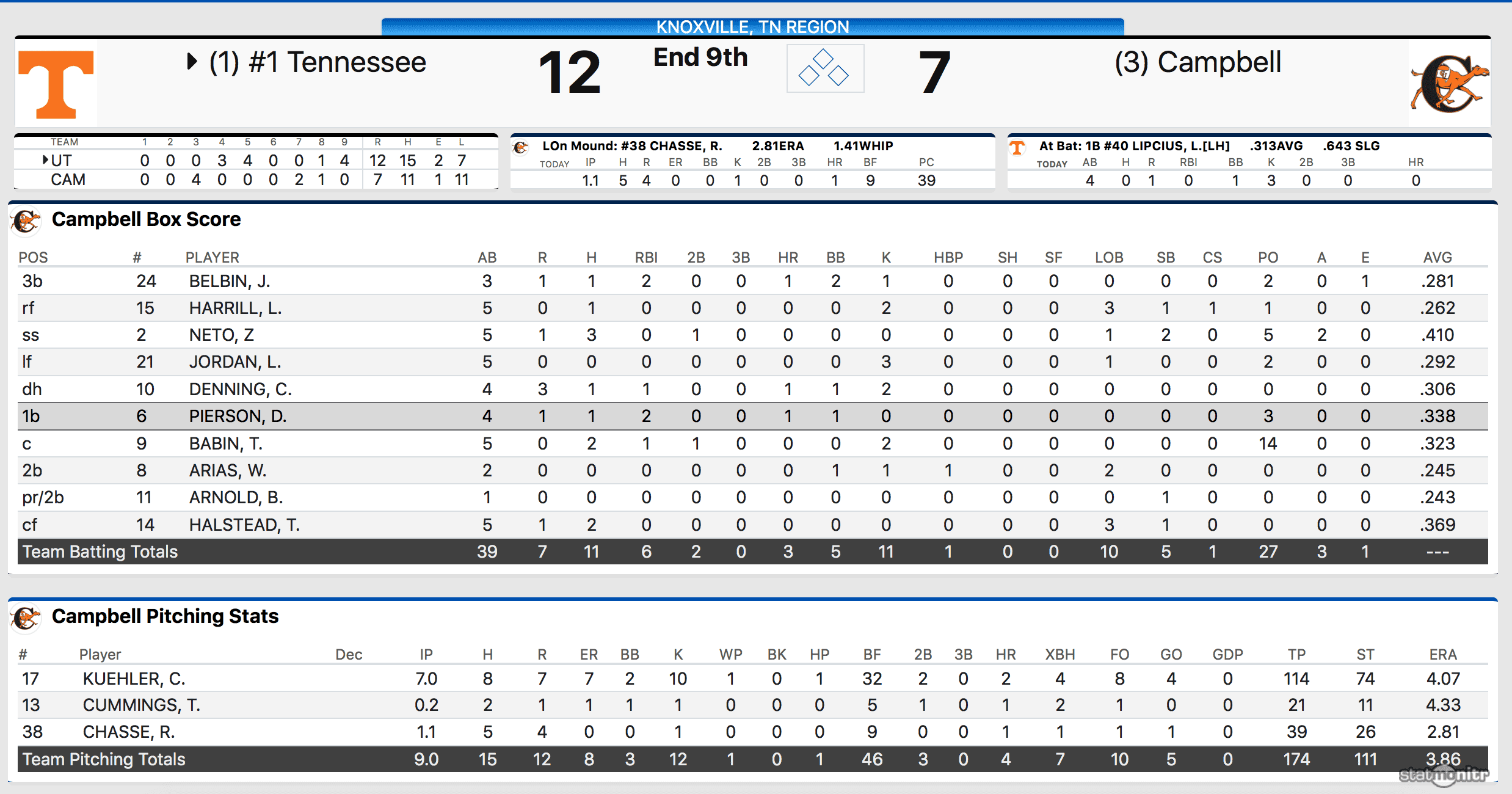 Tennessee advances to the Knoxville Regional Championship where they’ll face the winner of Campbell and Georgia Tech. First pitch is set for 7 p.m. ET Sunday night.