KNOXVILLE, Tn — Tennessee squandered opportunity-after-opportunity for the first eight innings as its bullpen kept them within striking distance of Georgia Tech.

With its back against the wall in the ninth inning, Tennessee busted down the door. The Vols exploded for six runs to use their second come from behind win of the weekend and advance to the Super Regionals.

Here’s everything you need to know about Tennessee’s Knoxville Regional clinching win.

The script was eerily similar to Tennessee’s Saturday night win over Campbell. The Vols couldn’t capitalize on leadoff baserunners the first three innings — it was the first two innings against the Fighting Campbells — before the lower-seeded opponent jumped out to a third inning lead.

It was a two-run Campbell home run followed by a costly two-out Cortland Lawson fielding error that gave the third-seeded Camels a 4-0 third inning lead.

The Cortland Lawson error led to Georgia Tech’s first two runs. Drew Beam got a massive one-out strikeout with Georgia Tech runners on second and third before a poor Lawson throw got past Luc Lipcius.

The Yellow Jackets waited until the fourth inning to score the next two runs as a Stephen Reid two-run homer doubled their lead. Beam surrendered back-to-back walks after the long ball to end his day.

“I would say that they’ve responded in a lot of situations,” Vitello said of his team. “There’s just been a lot of things where our guys needed to gather themselves and respond, and I think they’ve done that consistently throughout the year. Just kind of comes off in more dramatic fashion when the last two days happen. All it does is build self-belief, now you’re in that situation again, you’d like to, as a coach, keep your composure a little bit more because you know what these guys are capable of.”

The right-handed pitcher used his slider and changeup to get ahead of Tennessee batters around his fantastic upper-90s fastball.

Tennessee had runners on consistently against Maxwell but couldn’t capitalize. Volunteer batters were zero-of-15 with runners on base against Maxwell. The biggest moment came in the sixth inning when Maxwell passed the 100 pitch threshold and Tennessee loaded the bases with two-outs.

The Georgia Tech starter fanned Seth Stephenson looking to strand the bases loaded and end his day. It was Maxwell’s 11th strikeout of the game while surrendering five walks, five hits and one earned run.

“On Maxwell, I actually saw him this summer, and today was exactly what I saw this summer,” Tennessee right fielder Jordan Beck said. “He’s got swing-and-miss stuff. He had a big fastball. And when he used his fastball, he played up in the zone to lay off, and he had a breaking ball that was very downhill and tough to see out of the hand.

Tennessee was knocking on the door all night, but the nation’s most dangerous offense just couldn’t kick it down.

Jared Dickey’s pinch hit single to leadoff the ninth marked the seventh time the Vols’ leadoff runner reached base. Tennessee finally fully capitalized with its back against the wall. The Vols exploded for a six-run ninth inning that not only gave them the lead, but a comfortable one that they’d need.

Jordan Beck provided the biggest hit of the night, doubling over Colin Hall’s head as the centerfielder severely misread the game-tying hit.

Evan Russell followed it up with his second hit of the night and Cortland Lawson brought the sixth run of the inning in with a sac fly. Tennessee completely flipped the script from a disastrous situational hitting game by delivering with the stakes the highest they’d been.

“I do know that that crowd was… thank you,” Vitello said. “I know I say it all the time. That was loud. That was like thunder in the ninth inning. So, we appreciate that. Obviously, they’re reacting to what the kids are doing. That was fun. Hopefully they all celebrate safely and come back next weekend.”

Redmond Walsh, who came in and retired three Yellow Jackets on three pitches in the eighth inning, ran into trouble in the ninth. Georgia Tech scored two runs and brought the winning runner to the plate, but Walsh caught Hall looking to clinch the win. 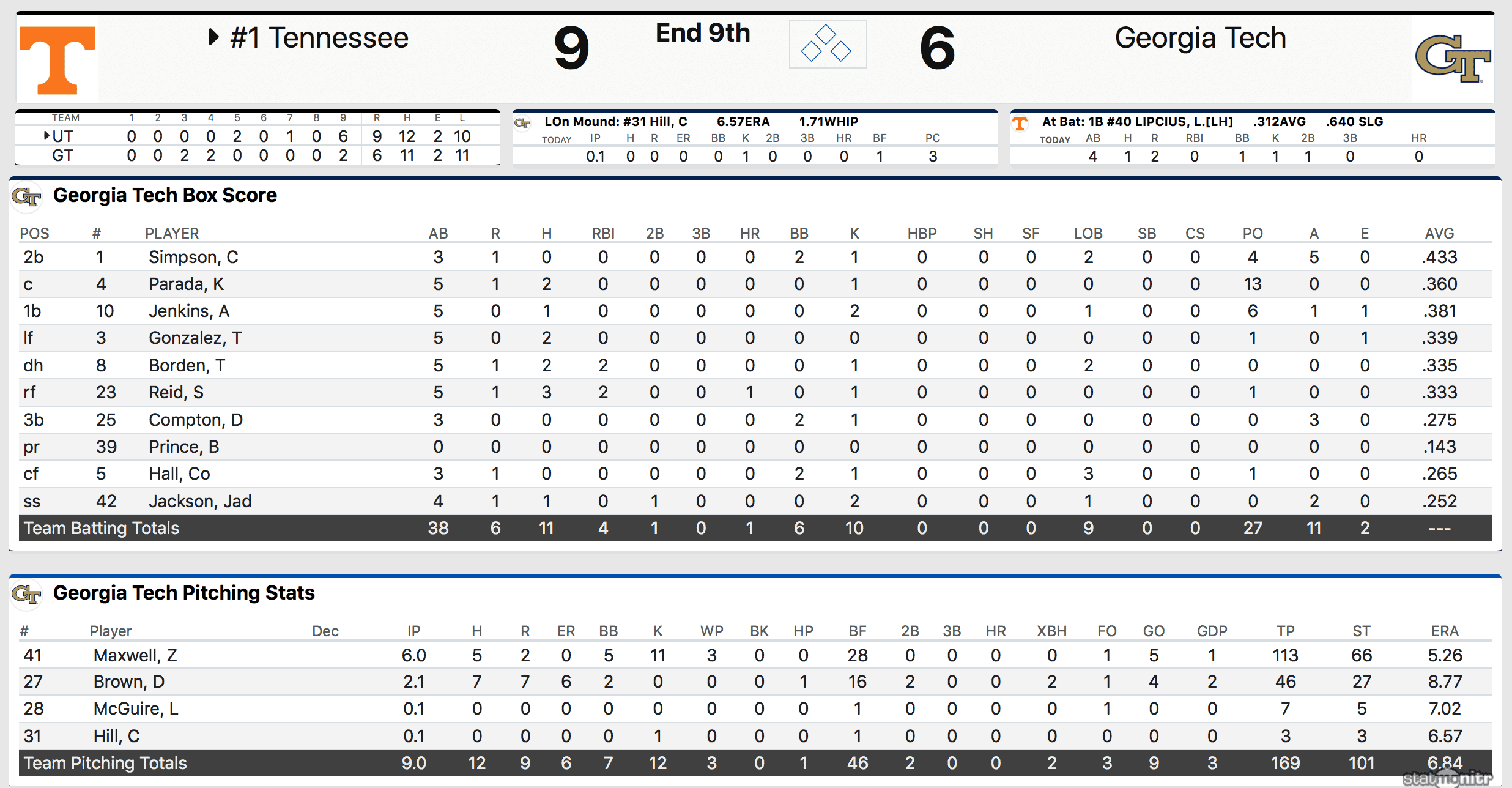 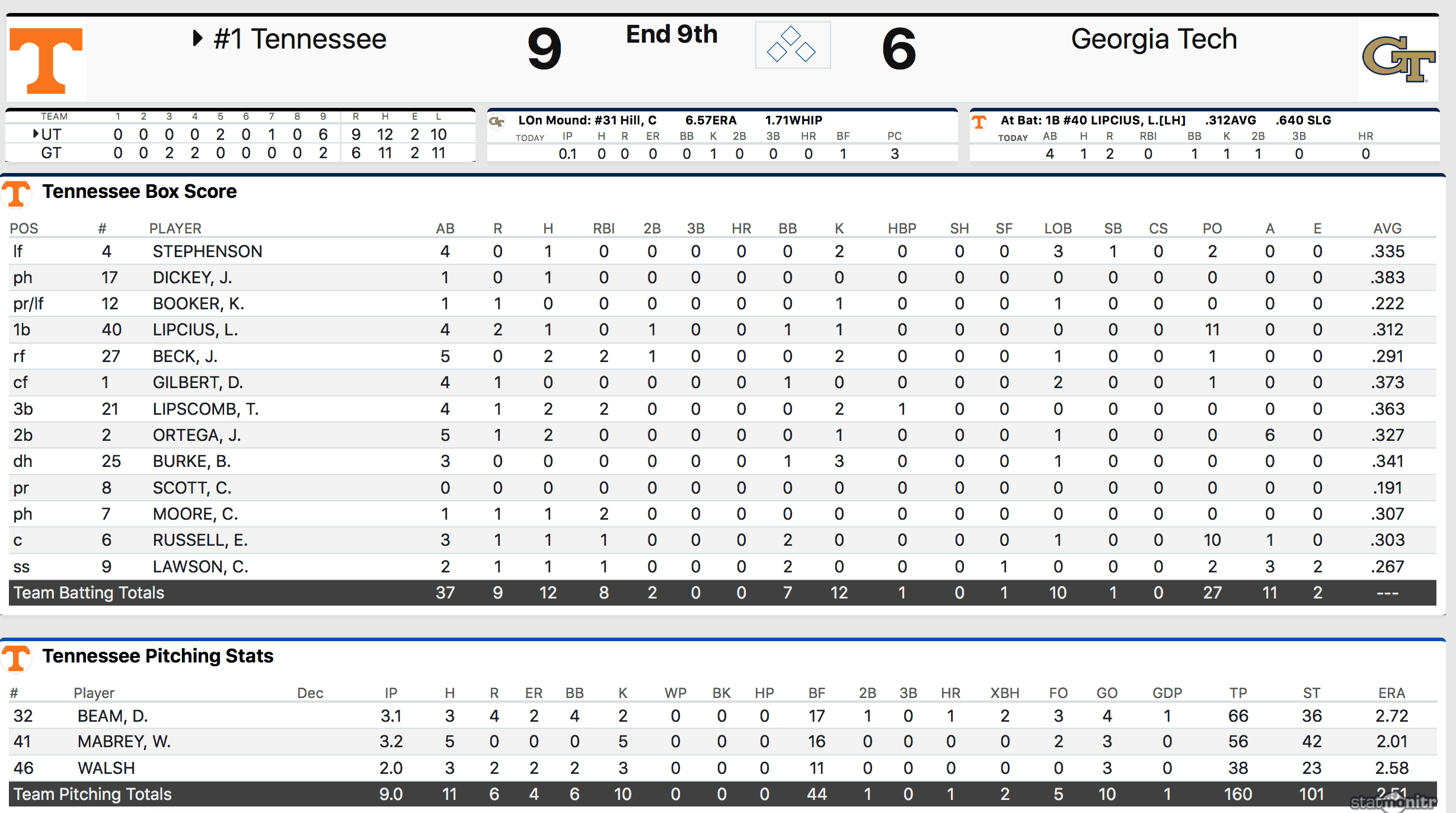 Tennessee advances to the Super Regionals to face Notre Dame— the winner of the Statesboro Regional. The series’ schedule has not been announced.