Former Heisman Trophy winner and NFL quarterback Robert Griffin III is fired up about Tennessee’s postseason run on the diamond.

After Tennessee defeated Georgia Tech on Sunday to win the Knoxville Regional, Griffin excitedly tweeted out his congratulations to the Vols.

That’s the way to finish @Vol_Baseball 🔥

Sunday’s tweet is hardly the first time that Griffin has been tuned into Tennessee baseball this season. Griffin, a former quarterback at Baylor along with the NFL’s Washington Football Team and Baltimore Ravens, has routinely tweeted about the Vols throughout the season. In specific, Griffin is a big fan of Tennessee third baseman Trey Lipscomb.

Lipscomb and Griffin recently became connected through family, which Lipscomb talked about during an interview on the Josh & Swain show from April.

“My Dad, he just got married,” Lipscomb said during the interview. “She is Estonian. And RGIII’s wife (Grete Šadeiko) is also Estonian. So they got the connection back there in Baltimore and then she gave me the hookup and got me introduced to [Robert Griffin III]. We’ve just bonded ever since!”

Another one for Trey Lipscomb 🔥 pic.twitter.com/fIIl25L0x1

Despite no apparent connection to the University of Tennessee, Robert Griffin III has certainly jumped on the train to become one of the team’s most prominent fans in the sports world. With more than two million followers on Twitter, Griffin’s credibility and popularity on social media are helping elevate the status of Tennessee and Trey Lipscomb by posting highlights with the utmost excitement.

After sweeping the Knoxville Regional last weekend, Tennessee and Lipscomb will now be gearing up to host Notre Dame this upcoming weekend with a spot in the College World Series on the line. 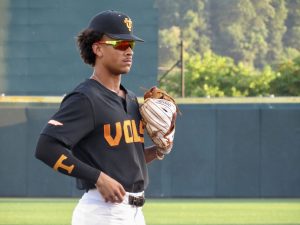