Tennessee and Notre Dame are set to meet up in the Knoxville Super Regional this weekend with a trip to the College World Series on the line.

The Vols entered this spot by defending home field in the Knoxville Regional. Tennessee swept their trio of weekend opponents, defeating Alabama State 10-0 on Friday, Campbell 12-7 on Saturday, and Georgia Tech 9-6 on Sunday. The final two wins didn’t come easy for Tennessee as the Vols had to battle from a four-run deficit in both games. However, behind the arms of Tennessee’s strong relief pitching, the Vols were able to hold out long enough for the dynamite offense to pull through late in each contest.

Notre Dame, on the other hand, will be gearing up for their second straight series on the road after winning the Statesboro (GA.) Regional last weekend. The Fighting Irish began the weekend with a 3-2 victory over Texas Tech on Friday, which was followed by a 6-4 win over Georgia Southern on Saturday. Finally, the Irish closed down the sweep on the road with a 2-1 win over Texas Tech to officially send Notre Dame to the next round.

Tennessee and Notre Dame will now square off in a three-game series in Knoxville with the winner advancing to the College World Series in Omaha. The first game will be this upcoming Friday at 6:00 p.m. ET, followed by a contest on Saturday at 2:00 p.m. ET. If a third game is necessary, it will be played on Sunday at a time that is to be determined in the future. This series will play out as a best-of-three series.

Below are the season statistics from both Tennessee and Notre Dame on the diamond. The ranking next to each category is that team’s current standing in all Division I baseball. For example, Tennessee is No. 11 in all of college baseball in batting average, while Notre Dame is sitting at No. 51. The statistics and rankings are courtesy of NCAA Stats and D1 Baseball. 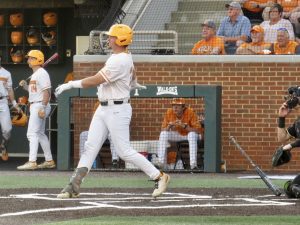 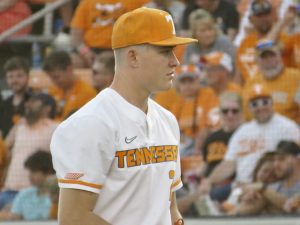 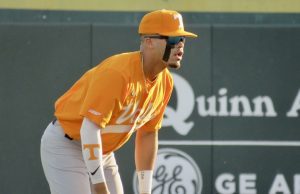 Tennessee 2B Jorel Ortega against Campbell. Photo by RTI/Ric Butler.