The Fighting Irish hit four home runs in four innings while jumping out to a massive lead the Vols couldn’t overcome while a pair of ejections set Tennessee back the rest of the weekend.

Here’s everything to know about the series opening loss.

Notre Dame Puts Tennessee In Hole It Hasn’t Been In

Tennessee’s early game struggles from last weekend’s regional carried over to game one of the weekend series between the Vols and Fighting Irish. While Campbell and Georgia Tech’s leads came with big innings, Notre Dame used steady success to give the Vols their biggest deficit of the season.

Notre Dame has under half the home runs Tennessee has this season, but jumped on Blade Tidwell with three long balls in the first three innings.

It took the Fighting Irish just three bats to take the lead as Ryan Cole led off the game with a single and Carter Putz homered off the video board in right field.

Jared Miller extended Notre Dame’s lead to 3-0 with a solo home run in the second inning. The Fighting Irish had no one on base with two-outs in the third but a Putz single and Jack Zyska no doubter gave Notre Dame a 5-0 lead.

Tidwell got out go the inning with a strikeout but that’s all the time he’d see as Will Mabrey relieved him in the fourth inning.

“Two strikes. Two strikes,” Tennessee head coach Tony Vitello said of what went wrong for Tidwell.”I would like to think if you asked their guys how he was throwing the ball, he was throwing the ball pretty well, but then there were blips on the radar screen. You can get away with that at times, even against good teams, but they didn’t miss when those blips showed up. I think a lot of them occurred with two strikes. Not an ideal day for him, but he’s done a lot for us up to this point.”

The five-run deficit tied Tennessee’s largest of the season and after the Vols added a run via Jordan Beck sac fly in the bottom of the third, Notre Dame opened things up with a Jack Brannigan three-run home run in the top of the fourth.

The Vols were on the other end of that saying Friday night. Tennessee hit three solo home runs while it tried to pull itself out of the early hole.

Tennessee had baserunners on throughout the game, including runners on the corners in the fourth inning. The Vols struggled to capitalize or get the big hit with runners on base.

The Vols didn’t have a hit with a runner on-base until the seventh inning and finishing the game one-of-16 with runners on-base.

“Just going in there and doing our thing,” Trey Lipscomb said of how they can improve with runners on base. “We showed today that we have a bunch of guys in the lineup that can really do anything. Tomorrow, we just have to do our thing.”

In the most obvious since, Tennessee did a horrible job of setting itself up to win the final two games of the weekend and advance to the College World Series.

Star outfielder Drew Gilbert got ejected — and a subsequent suspension for game two — after cussing at home plate umpire Kellen Levy. Pitching coach Frank Anderson got ejected — his second of the season — in the aftermath. Since it was Anderson’s second ejection of the season, he will miss the rest of the weekend.

On the other hand, Tennessee’s bullpen did a good job of eating innings without having to use a plethora of arms or its most used ones.

Ben Joyce was massive, keeping Notre Dame off the scoreboard in 3.1 innings pitched. Joyce’s 64 pitches were the most he’s thrown out of the bullpen this season and second most overall.

Wyatt Evans got two-outs for Tennessee and while the Vols used top reliever Camden Sewell, he threw just 21 pitches. The senior should be available for game three if Tennessee makes it that far.

“Oh, it’s huge,” Lipscomb said of what the bullpen did. “I mean, the bullpen has always been there for us the whole season. But (tonight) I think (Notre Dame) threw more punches than we did.”

Tennessee will be without perhaps its top player on Saturday, but the bullpen should have plenty of bullets to back up ace Chase Dollander. 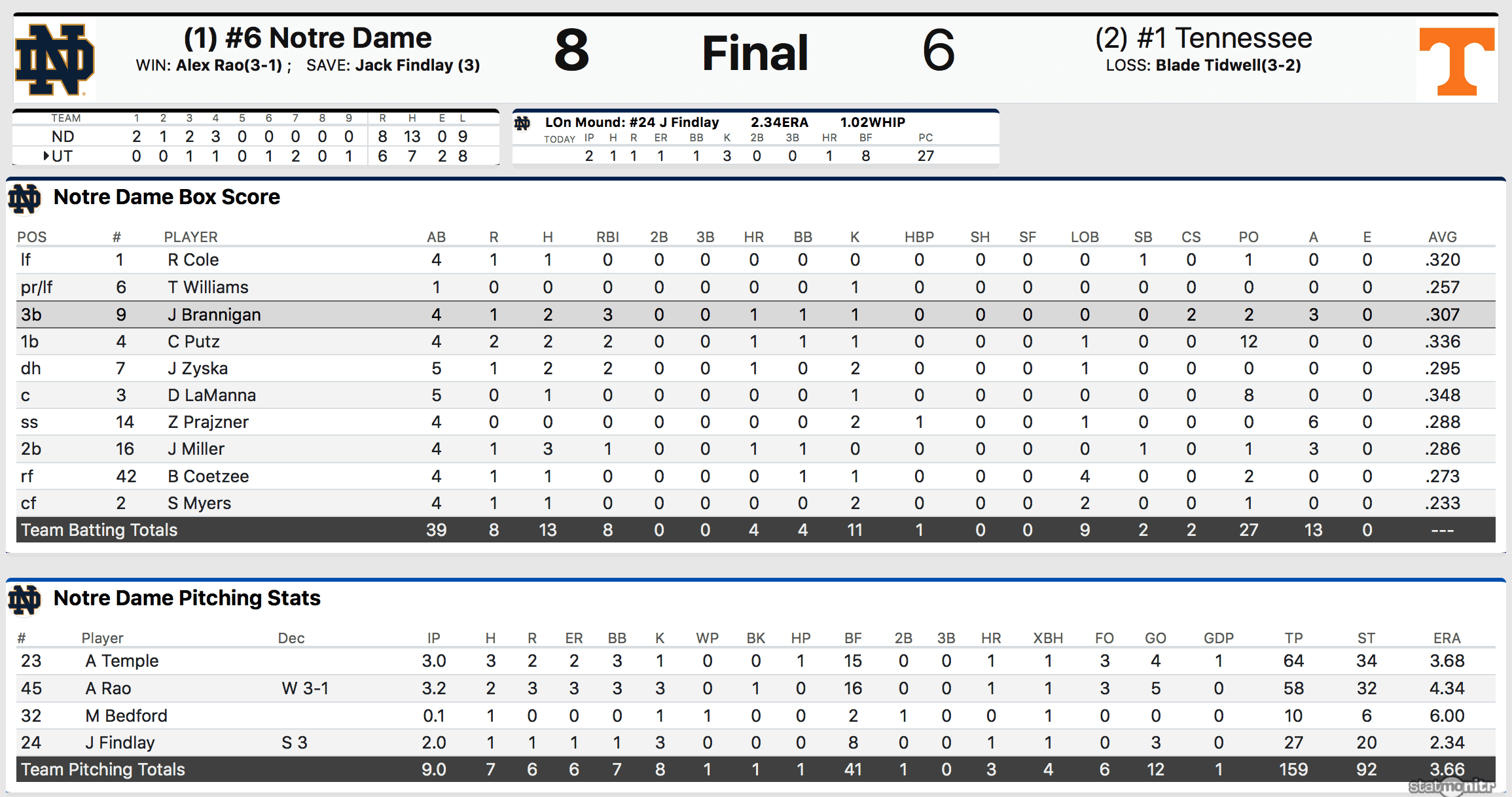 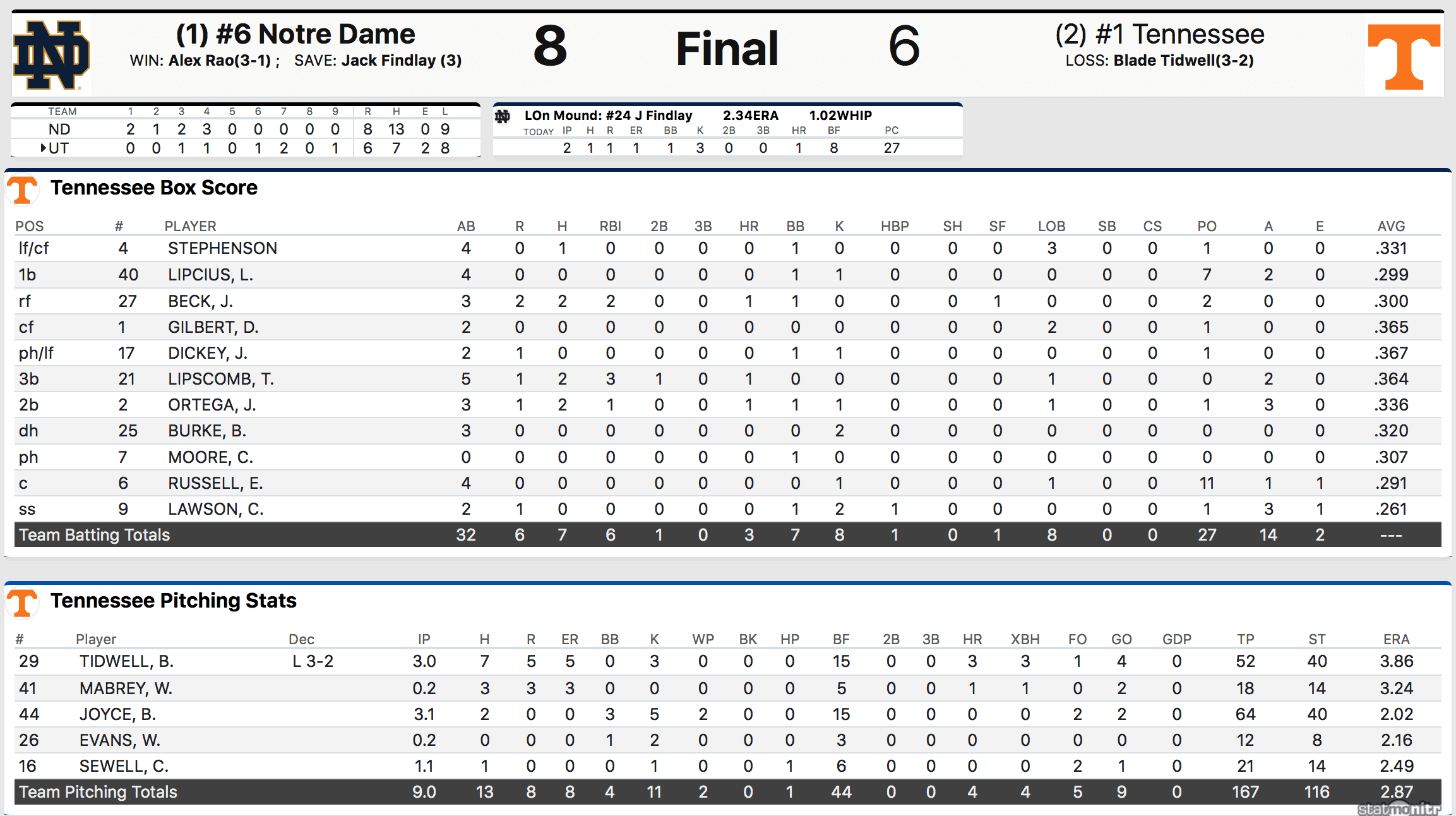 Tennessee and Notre Dame resume its weekend series at 2 p.m. ET Saturday at Lindsey Nelson Stadium. The Fighting Irish can punch their ticket to Omaha and end the Vols’ season with a win.