KNOXVILLE, Tn — With its season on the brink, Tennessee responded. The Vols used a dominant fifth inning and a bounce back Chase Dollander start to defeat Notre Dame, 12-4.

With the win, Tennessee forces a winner take all series finale Sunday afternoon. The Vols will get back star Drew Gilbert but not pitching coach Frank Anderson for the series finale.

Here’s everything you need to know about Tennessee’s game two win.

Poor starts have plagued Tennessee in the NCAA Tournament as the Vols have fallen behind by four or more runs early in their last three games.

Tennessee avoided it in multiple ways. Playing as the road team at Lindsey Nelson Stadium, Seth Stephenson led off the game with a single. After it looked like the Vols would strand the leadoff baserunner — a common theme of the last two games — Trey Lipscomb hit a hard-hit ground ball double into left field to get Tennessee on the board.

Notre Dame ace John Michael Bertrand was excellent through four innings, but the Vols worked competitive at-bats and made him work for it before a massive fifth inning.

On the mound, Chase Dollander gave Tennessee what it’s been missing since the first game of the NCAA Tournament.

The SEC Pitcher of the Year allowed just two Notre Dame baserunners through the first four innings. A Jack Zyska leadoff single and stolen bases gave the Fighting Irish a runner on second with no outs in the second inning. He stranded the runners with a pop out, fly out and strikeout.

Dollander gave up a run each in the fifth and sixth inning, but cruised around that. The Georgia Southern transfer threw 112 pitches while allowing just six baserunners and two runs in seven innings pitched.

Even with a massive lead, Dollander was efficient, allowing some runs but not killing his pitch count. In the process, he asked his bullpen to get just six outs and saved them well for Sunday’s finale.

Tennessee needed a big outing from Dollander with its season on the brink. The All-American delivered.

It was a pitcher’s duel living up to the two ace’s numbers through the first four innings. Then Tennessee’s bats broke the game open by doing what they’ve done all season.

Luc Lipcius led off the inning with a solo home run to join Evan Russell and Todd Helton atop the Tennessee all-time home run list. Hitting it off of a left-handed pitcher was an ironic way to tie the record due to his career struggles against lefties.

A Cortland Lawson double and Stephenson bunt single set the stage for a one-out Jordan Beck no doubt home run. Beck took out some Volunteer frustrations on the long ball, punting his bat into his chest and slamming it to the ground while yelling at his teammates.

“I think the (Jordan) Beck homer really got us jittery, really excited,” Lipcius said. “It’s really cool when you that you have an offense that can just put on that many runs in one inning, and it just seemed like it happened like that. It’s just exciting when the dugout is all on board. They all got your back, and they all want you to do well. It’s a party in the dugout.”

With Tennessee leading 5-0, Evan Russell started a two-out rally by breaking the Tennessee career home run record with a solo shot. It wouldn’t last long as a Jared Dickey walk and Christian Moore single set the stage for a Luc Lipcius’ three-run homer.

The long ball was Lipcius’ second of the season and tied him with Russell atop the all-time home run list. While Lipcius is a sixth-year senior, he reached 39 career home runs in fewer at-bats than Russell and Todd Helton.

“You try to just go out there and play,” Lipcius said. “Of course, it’s impossible not to think about it. But like I said, it’s just a game and no one’s really chasing these records. It’s really cool after the fact that it happened, and Todd Helton is one of the greats of Tennessee and of all time. It’s really cool that two old guys are just hanging out up there at the top. You know it doesn’t really matter to me; I want him to have as much success as he can. I bet he wants me to have as much success as I can. I just want to see us win that last game this season.”

A Reversal Of Defensive Fortunes

Notre Dame head coach Link Jarrett called his team’s defensive performance in the series opener the difference in the game. The Fighting Irish — particularly their infield — was fantastic defensively while the Vols made two errors and had a handful of uncharacteristic miscues.

Notre Dame wasn’t terrible defensively, but didn’t make a handful of quality plays like they did on Friday night. The Fighting Irish miscues were most notable in the seventh inning.

Christian Scott led off the inning with a single that went off first baseman Carter Putz glove before Tennessee scored a pair of two-out runs due to a pair of defensive miscues. Seth Stephenson scored Lipcius on a throwing error and Jorel Ortega scored Stephenson when left fielder Jack Zyska fell down and a double dropped in front of him.

On the other end, Tennessee was crisp defensive. The Vols didn’t make any spectacular plays but limited mistakes too.

Tennessee didn’t commit an error with its Christian Scott misplaying a fly ball being its lone defensive miscue in the win. 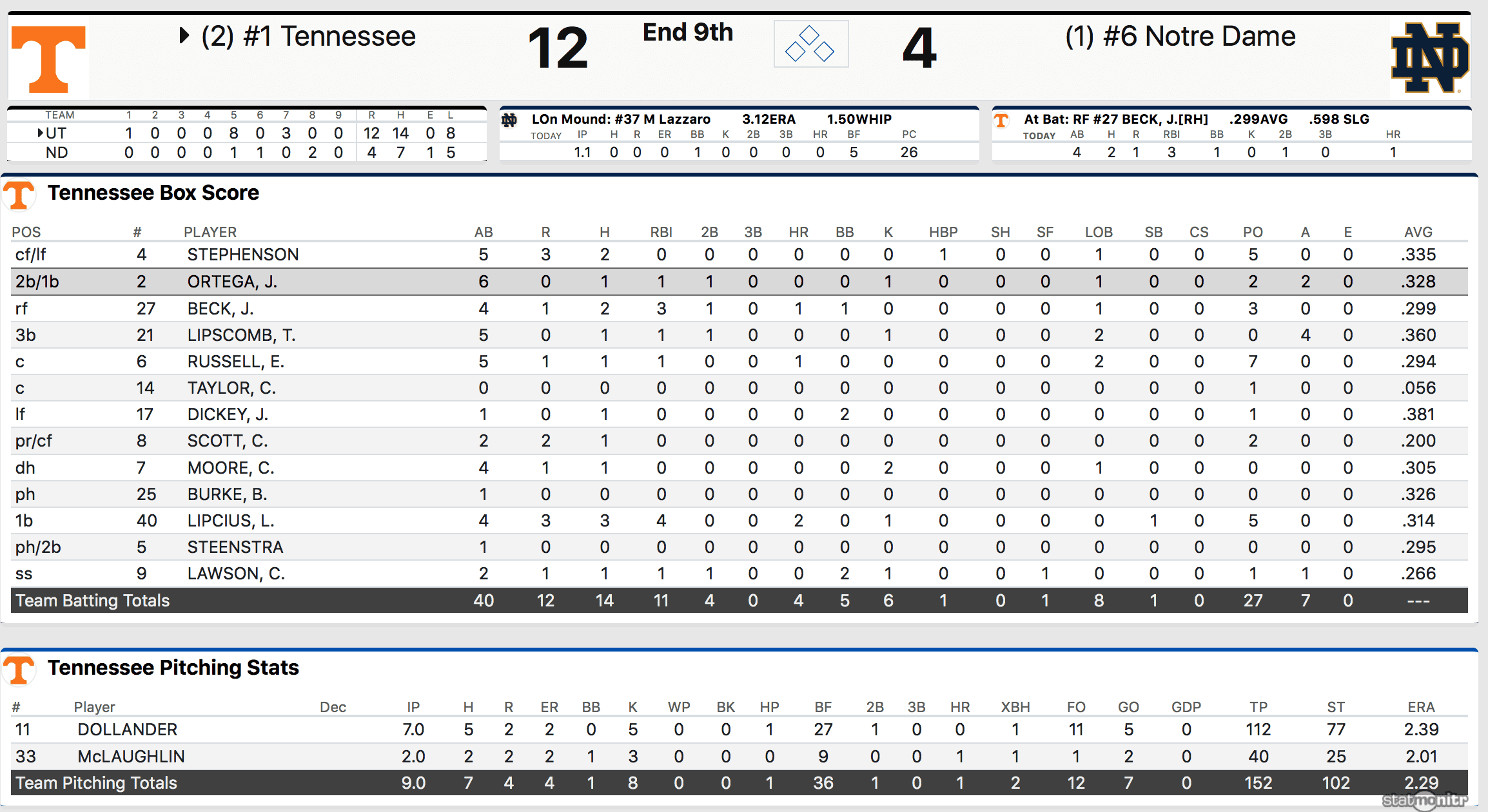 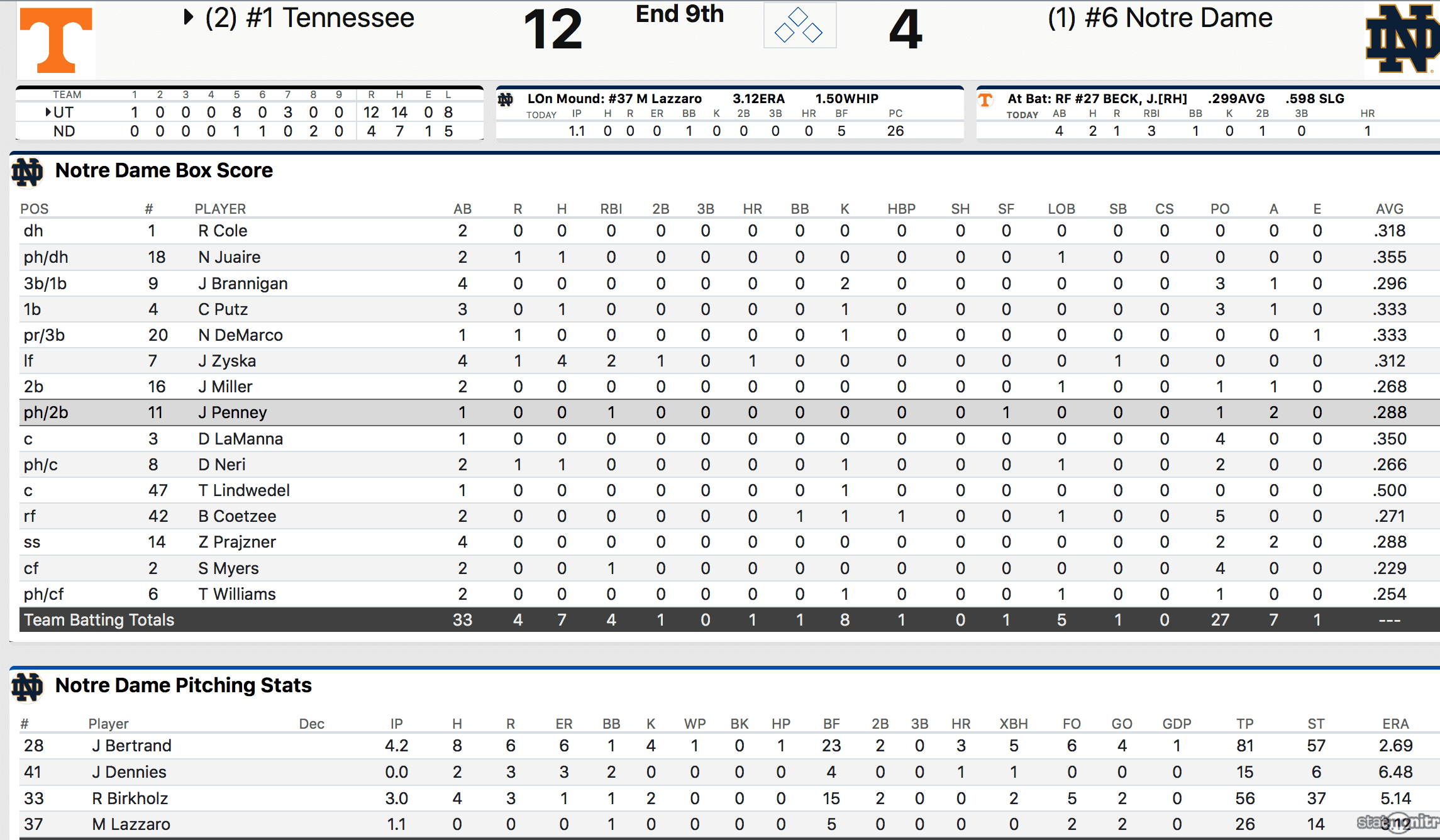 Tennessee and Notre Dame meet at Lindsey Nelson Stadium Sunday afternoon with a berth in the College World Series on the line. First pitch is at 1:06 p.m. ET. ESPN is broadcasting the game.