Here’s everything you need to know about Tennessee’s season ending loss.

Stephenson changed that narrative on Sunday. With the Vols and Fighting Irish knotted at one in the second inning, Notre Dame went to the bullpen with runners on first and second and Stephenson at the plate.

The junior college transfer delivered, lining a 1-0 pitch into left field for a two-out RBI single.

Stephenson would provide Tennessee’s third run as well, following up a fifth inning Cortland Lawson leadoff single with a RBI double down the left field line.

Stephenson finished the day two-of-four at the plate and was the only Vols to provide clutch hits.

Chase Burns Can’t Get The Final Out

Making his first start of the postseason, freshman pitcher Chase Burns was fantastic for most the afternoon.

The regular-season Friday night starter held Notre Dame to just one run through 6.2 innings but that’s when disaster struck.

Catcher David LaManna — who had just one home run on the season — flicked a game tying opposite field home run that barely cleared the low right field wall.

Tony Vitello surprisingly didn’t go to his active bullpen after the long ball and it backfired. Jack Brannigan followed the game tying home run with a no doubt blast to left field to give Notre Dame its first lead of the game.

“It’s just the fact that he had gotten their best hitter out,” Vitello said on why he kept Burns in. “Jack (Zyska) is a special kid. You can see that. He’s pretty annoying if you’re on the other side, but he’s that for a reason. Chase gets him out, so now we’re one out away. I’ve been at a couple of other fields too where it has that quirky—and (David) LaManna certainly squared it up—angle down the right field corner. If it goes, it goes.

“After seeing that foul-home run against Brannigan, maybe making the pitching change in the middle of that at-bat would have been wise, but I think Chase wanted the ball. He certainly took ownership of the game. We felt good about the matchup against LaManna, but we should have taken him out before that, in particular after the foul-home run. Usually what ends up happening is that you strike out as a hitter after the foul-home run, but kudos to him. He smoked two balls. It wasn’t like Chase wasn’t on the map. I think it was 97 on the radar gun. The pitch before was certainly a ball, but it was a pretty crisp 0-2 pitch where you’d like to see the guy swing and miss or if it’s a little closer to the plate, maybe you get a borderline strike call.”

Burns allowed four earned runs and five hits while striking out five in 6.2 innings pitched. The freshman was one out away from the best start of his college career, but he couldn’t get that massive out.

Tennessee Goes Down Without A Fight

Tennessee trailed by just one run with nine outs to work with when Notre Dame took its first lead of the game.

It was an easily erasable lead for an overpowered offense that’s had a handful of come from behind wins this season.

However, Tennessee had no comeback efforts on Sunday. Notre Dame added three insurance runs in the eighth inning — all unearned due to a Trey Lipscomb throwing error.

Notre Dame reliever Jack Findlay retired Tennessee in order in the seventh inning. Drew Gilbert reached on a fielding error in the eighth, but was caught trying to take second on a pitch in the dirt. Christian Moore worked a one-out walk in the ninth inning but Evan Russell grounded into a double play to end the game.

“He was just really good today,” first baseman Luc Lipcius said of Findlay. “His fastball was moving and he was putting it where he wanted to. He was just keeping us off-balance. Kudos to them. They have a really great staff and a really great team. He was just on today. Whatever he was doing was working against us. I don’t think it was much of an approach deal, he just got us out.”

After Notre Dame took the lead, Findlay faced the minimum as Tennessee’s season came to an end. 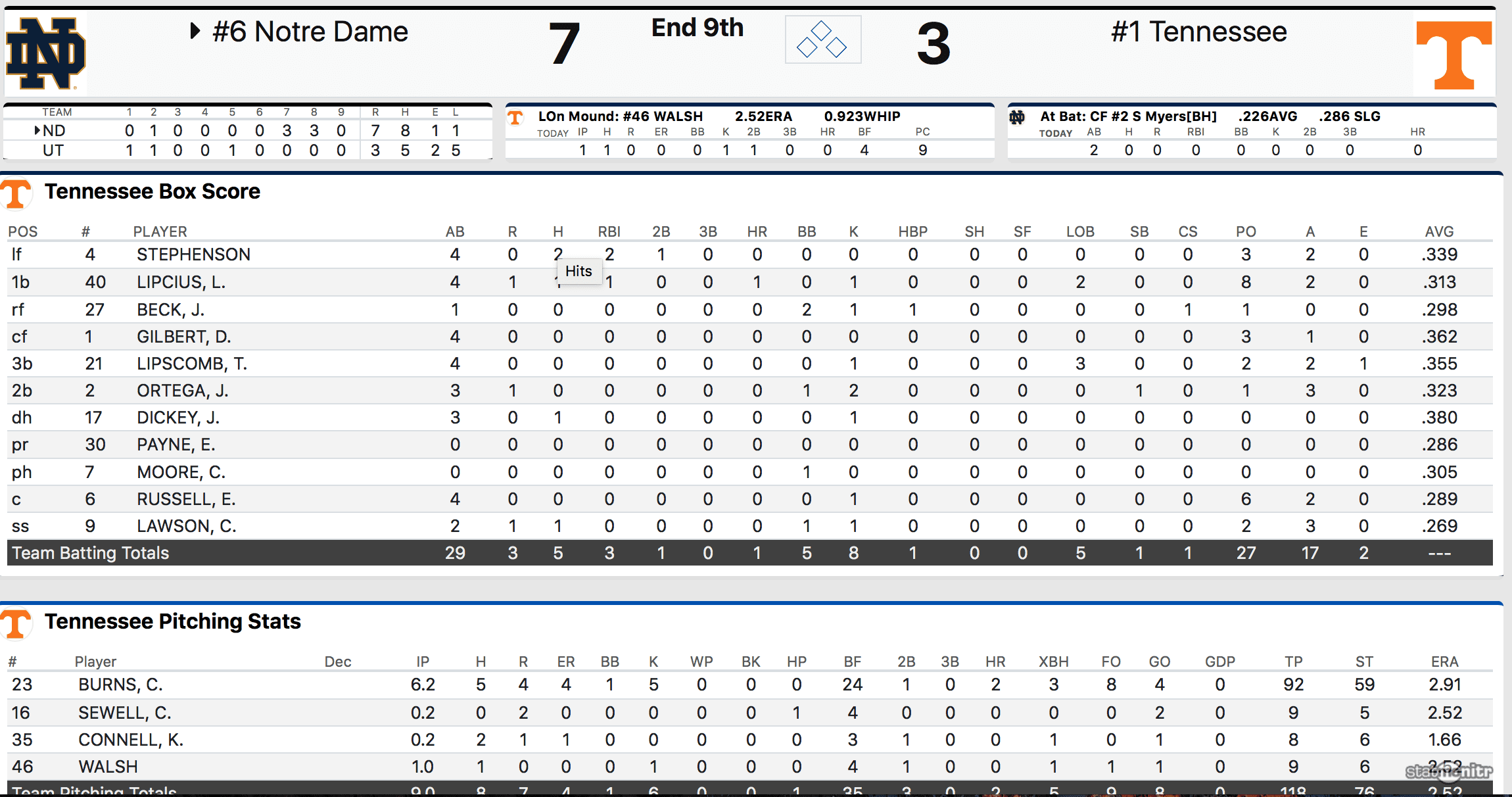 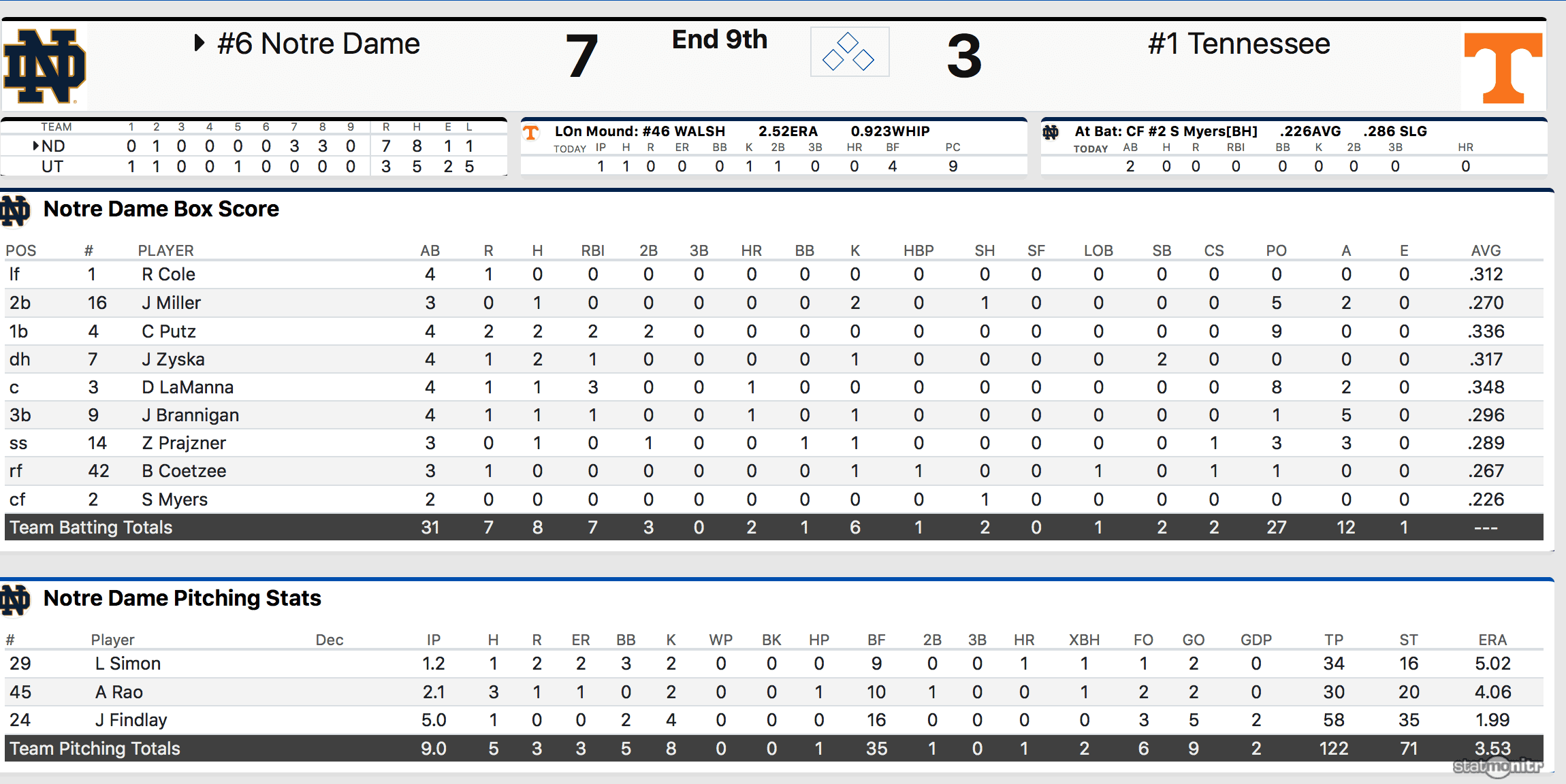