Former Alabama Crimson Tide infielder Zane Denton looks to be on his way to Tennessee.

After entering the transfer portal in mid-June, Denton made the announcement on Saturday morning via Instagram post. Denton did take a quick visit to Knoxville earlier in the week before announcing his decision over the weekend. 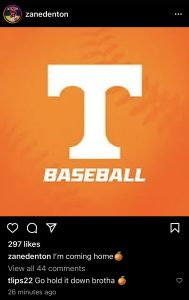 As seen in the comments, Tennessee third baseman Trey Lipscomb was one of the first to respond saying, “Go hold it down brotha,” with an orange emoji as well.

Denton will have two years of eligibility remaining at Tennessee and also will be eligible for the MLB Draft later in July.

The Brentwood, Tennessee native originally played for Ravenwood High School before heading to Alabama for his first season in 2020. After getting adjusted to the new level of ball during his freshman year, Denton was strong in his sophomore and junior campaigns and started all 58 games in both seasons.

Denton hit .263 during his final season at Alabama with 13 home runs, 12 doubles, and 48 RBIs. Denton’s 13 home runs were the most from an individual at Alabama this season and would have been good for seventh-most on Tennessee’s 2022 team.

Alabama third baseman and Brentwood, Tennessee native Zane Denton is transferring to Tennessee for his final year of eligibility.

“He’s just one of those guys that’s got the hitting gene — that is just a pure hitter,” Alabama head coach Brad Bohannon said of Denton in 2022 via Bama Central. “He’s done a really good job of developing his body here, developing some athleticism and becoming a much better defensive player. He’s also grown as a person and achieved success at a high level in the classroom, which we as a staff are proud of.”

Denton was named to the Newcomer All-SEC Team, the SEC All-Defensive Team, and the SEC Spring Academic Honor Roll in 2021.

Denton’s 11th home run this season came off of Tennessee pitcher Drew Beam during the Sunday series finale in Knoxville.

Now, after facing Tennessee numerous times throughout his career, third baseman Zane Denton is heading back to his home state after committing to Tony Vitello and the Tennessee Volunteers.

Heupel Weighs In On Who Has The More Explosive Offense: Tennessee Baseball Or Football?