While only two of them were able to play on the same field, all three have memories and stories that will connect them forever.

On Tuesday morning, Tennessee’s social media team posted the video of Jennings’ hail mary touchdown reception to beat Georgia in Athens in 2016. In the comment section below the video on Instagram, Stallworth, Dobbs, and Jennings shared some inside stories from that day.

“My man Jabar Gaffney called me right after Georgia scored to laugh at me,” VFL Donte Stallworth commented. “I told him ‘We have some time, you never know’ and when Dobbs threw it up I called ‘TOUCHDOWN!!’ and when JJ caught it, I was laughing so hard and he hung up on me. #SweetMemories thanks [Josh Dobbs] @joshdobbs [Jauan Jennings] @u_aintjj”

Jauan Jennings was quick to respond to Stallworth’s story.

“@DonteStallworth – Stared at a picture of you wearing a cast in the end zone for hours for weeks hoping I was gonna get to do the same. Forever a legend means a lot coming from you! We were just trying to fulfill very big shoes! Glad we could give ya a lil some!” 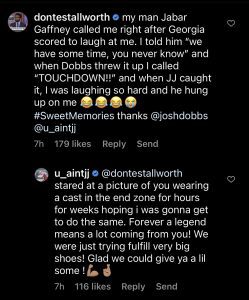 VFL and former Tennessee quarterback Joshua Dobbs then started his own comment thread.

“Was there ever a doubt? [Jauan Jennings] @u_aintjj” Dobbs wrote while attaching a rocket ship emoji to the text.

“@JoshDobbs can’t say there was a single doubt once my dawg [Evan Berry] @EvanDuce1 got us past the 50!” Jennings responded to his former quarterback. “I’m just glad we getting paid now!” 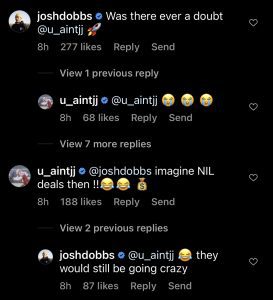 𝐂𝐀𝐔𝐆𝐇𝐓!!!! Jauan Jennings makes the incredible catch on the final play of the game to give the Vols a victory over the Dawgs.