Hendon Hooker and Cedric Tillman burst onto the SEC scene last year in an undeniable way. With Hooker as the quarterback and Tillman as the number one wide receiver target, the two combined for 139 yards per game in Tennessee’s final four games of the season – including a 10-catch, 200-yard performance against Georgia.

While speaking with the media on Thursday’s SEC Media Days event, Hooker spoke about the relationship he has with Tillman. After a year in the program together, the two are seemingly inseparable. And that includes both studying for a game… and arguing about the music industry.

“I thought he was kind of a quiet guy,” Hooker said about his first impression of Tillman. “Really laid back. I thought we were going to be great friends from the jump because I was kind of the same way, kind of a shy reserved guy… But me and Cedric really kind of clicked from the jump… I remember the spring game we really connected like four plays in a row and then he went over the top for a touchdown.”

“So from then on we really just started to click,” Hooker continued on to say. “Started to hang out a little bit more, taking receiver/quarterback trips, and just kind of building that chemistry. So now we know each other like the back of my hand. I know when he’s going to make a cut, he knows when the ball is coming out.”

Those that follow college football, particularly the SEC and Tennessee, know that Tillman and Hooker are a tremendous duo when it comes to the football game. However, just like me and you, the two talk about just about everything under the sun when it comes to non-football-related topics. All work and no play make for a dull day in the end, right?

The biggest topic though? The rap game.

“Everything,” Hooker said about what non-football things he and Tillman talk about. “The topic that’s like an everyday topic is who’s the best rapper in the game right now.”

“Who is?” a journalist from the media section asked.

“What does [Tillman] say?” another reporter asked.

“He’s kind of like an old soul,” Hooker said about Tillman with a grin. “So he likes Kayne [West] and stuff like that. And I’m saying, ‘Come on, bro.'” 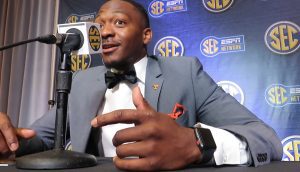 Despite Hooker saying that the conversation takes place daily, the Tennessee quarterback says the argument has never been stale.

“No, it doesn’t [get old], because it’s always a new intricate, he always brings up a new fact about Kanye or some rapper!” Hooker said about Tillman.

The divide between the “old school” versus “new school” mentality, for non-football topics, can be seen among the Tennessee players in the locker room, according to the 25-year-old Tennessee quarterback. Even though all of the players are within just a few years of each other, those few years in the early 2000s or so can feature a laundry list of differences. Take TV, for example.

“I mean, it would be like old Disney Channel shows,” Hooker said about the TV shows that some of his teammates aren’t familiar with. “Like [The Famous] Jett Jackson, The Jersey, stuff like that.”

Hooker says the same thing is true in the video game world, too.

“They didn’t experience the Wii!” Hooker proclaimed while he threw his arms to the side in a shrugging fashion. “Simple things like that. I played GameCube when I was growing up.”

It was good to see the relaxed, non-football side of some of the players on Thursday. Hooker’s answers regarding TV and video games put into perspective how well-rounded these athletes seem to be. One way or another, though, Tennessee and Hendon Hooker are looking to put up some video game-type numbers this upcoming season.

See the full interview with Tennessee quarterback Hendon Hooker below.