Tennessee has officially added another name to the roster on the morning of the third day of fall camp. On Wednesday morning, running back Lyn-J Dixon announced on Instagram that he would be transferring to the University of Tennessee. 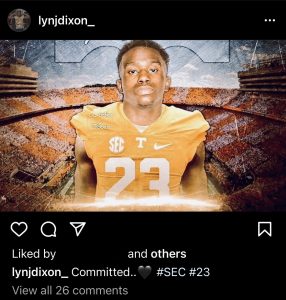 Dixon, a four-star recruit in the class of 2018, first committed to Tennessee and then-head coach Butch Jones in June of 2017. However, after a .500 start through the first six games of the 2017 season including an 0-3 start in SEC play, Dixon de-commited from Tennessee later that fall.

The Butler, Georgia native eventually signed with Clemson and played there from 2018 until after his senior season in 2021. During his time at Clemson, Dixon rushed for 1,420 total yards with an impressive 6.5 yards per rush on 218 total attempts. Dixon entered the Clemson scene on fire but his production did trail off as the years went on.

In addition, Dixon does bring a national championship ring with him to Knoxville after the Tigers’ championship victory over Alabama in 2018.

Now, with Tennessee fall camp just starting to get underway, Dixon has announced that he will be transferring to Tennessee.

The news of Dixon’s arrival does come at an opportune time for the Volunteers. On Sunday, Tennessee head coach Josh Heupel announced that Tennessee running back Len’Neth Whitehead would be missing the entirety of the season after undergoing recent surgery. That originally left Tennessee with four running backs in Jabari Small, Jaylen Wright, and a pair of freshman newcomers in Justin Williams-Thomas and Dylan Sampson.