Former Tennessee outfielder Drew Gilbert was dynamite in his professional debut on Thursday as the Astros Orange squad played a doubleheader with the Mets in the Florida Complex League.

The first game was a completion of a contest that was originally suspended on July 22, 2022.

Gilbert entered at centerfield in the fifth inning of the first game. In his first at-bat for the Astros in the sixth inning, on a 2-2 count, Gilbert hit a home run over the right field fence. The former Volunteer hit 22 home runs in his three-year career at Tennessee.

Gilbert also drew a walk and hit into a ground-out in the first game. The Astros would go on to win the game by a score of 10 to 4. 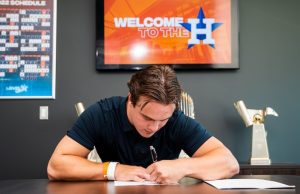 In the second game of the team’s doubleheader, Gilbert was the leadoff man in the lineup as the designated hitter. With the Astros down 2-0 in the sixth inning, Gilbert hit a one-run single to center field, advancing to second and scoring a second runner on a fielding error made by Mets’ centerfielder Blaine McIntosh.

While the Mets would go on to win by a score of 3-2, Gilbert finished the game with two hits, one RBI, and one strikeout in his four plate appearances.

Gilbert’s first day of professional baseball was undoubtedly a memorable one. Across two games throughout the day, Gilbert finished 3-6 with a home run, two RBIs, one walk, one stolen base, and one strikeout.

Drew Gilbert was selected with the 28th overall pick in the first round of the 2022 MLB Draft on July 17. Nine days later, on July 26, Gilbert officially inked his deal with the Astros.