There’s some dysfunction going on with the Kentucky Wildcats in Lexington over the last 24 hours or so. And Tennessee is capitalizing on it.

Let’s start at the beginning.

On Thursday afternoon around 2:00 p.m. ET, The Athletic reporter Kyle Tucker posted a new quote from Kentucky head coach John Calipari while talking about his desire for the school to build a new basketball practice facility.

Within an hour, the quote about Kentucky not being a football school had found its way to Kentucky’s head football coach, Mark Stoops. As imagined, Stoops fired back at his Kentucky coaching companion.

“Basketball school?” Stoops said via quote tweet. “I thought we competed in the SEC? #4straightpostseasonwins”

Stoops is clearly upset with Calipari’s reference to Kentucky as a basketball school, showing off Kentucky’s four straight bowl wins in the Citrus, Gator, Belk, and Citrus Bowls, respectively. Meanwhile, Kentucky basketball, on the other hand, missed the NCAA tournament in the 2020-2021 tournament and suffered a first-round defeat to 15-seed Saint Peter’s in the first round of the tournament in the 2021-2022 postseason. 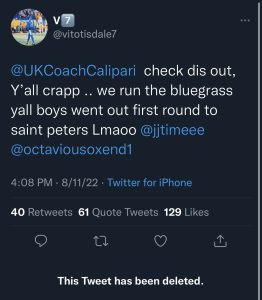 All of the internal Kentucky dysfunction happened in one quick Thursday afternoon for the Wildcats. However, by the time the evening came around, Tennessee players and staff had seemingly become aware of the tweets.

“Yikes,” James said with five laughing emojis and two orange hearts. “We love each other on this side. Everybody eats #volnation #everythingschool”

James’ tweet quickly spread like wildfire throughout the Tennessee fanbase to the tune of 46 replies, 38 quote tweets, and over 2,000 favorites in less than one day.

It wasn’t just the Tennessee fanbase that saw the tweet, though. Tennessee athletic director Danny White seemingly also saw everything unfold and agreed with his basketball student-athlete.

“Couldn’t agree with you more @jjjames30!” White said in a tweet. “#everythingschool #GBO”

Josiah Jordan-James and Danny White’s tweets, at the time of this publication, have received 69 replies, 60 quote tweets, and over 3,000 likes combined. The Vols certainly did a great job of capitalizing on Kentucky’s mishaps by rallying and uniting their own fanbases and sports teams.

When Tennessee says that they are an #everythingschool, part of that is obviously the tongue-in-cheek response to Kentucky’s situation. However, at the same time, from a relationship perspective, it does seem to be true.

Tennessee HC Josh Heupel is getting recruited to Tennessee's baseball team by none other than Tennessee HC Tony Vitello.

Someone yelled out, "Heupel for Honcho?!" pic.twitter.com/j3MVohTekW

Tennessee HC Tony Vitello with the Zakai Zeigler jersey on during the game. pic.twitter.com/qt7i05oimB