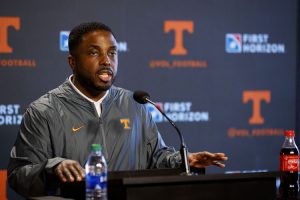 Now, heading into his second year with the Volunteers, Banks has several more pieces to work with as Tennessee’s defensive coordinator. The Vols’ improved depth has been noticeable throughout training camp, particularly in the secondary and with the linebackers. Whether that talent can perform in-game is a question that remains unanswered for most, but the depth is undoubtedly better than in year one.

“I think a bit of that is to be determined, but again, we have more scholarship bodies at this point,” Banks said at the beginning of training camp on July 31. “We just had a defensive meeting and my message to those guys was that we are going to play the guys that earn the reps, but the reality is you’ve got to earn it. Do we have more bodies? Absolutely. That’s a good thing, that’s a great starting point. As we continue to divide reps and who has the honor of running out there with the starting group, that will be based on the work that those guys put in and I know they are eager to put that work in. We will find out soon exactly how much depth we will have.”

More from RTI: Hendon Hooker Mic’d Up During First Week of Tennessee Camp