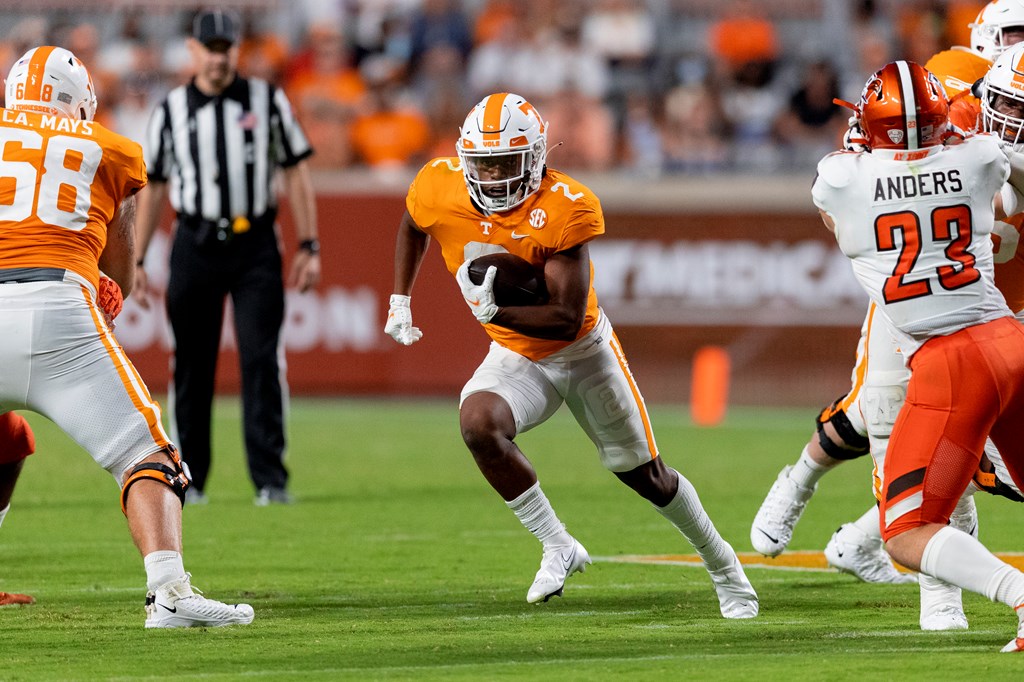 Lyn-J Dixon’s short time in Knoxville was just that.

The transfer running back arrived in Knoxville the first week of August and departed Sunday after struggling to carve out a major role in Tennessee’s offense while battling a foot injury in fall camp.

So what do the Vols have at running back with Dixon departed?

Junior Jabari Small is the leader of that group after totaling 796 yards and nine touchdowns while battling a shoulder injury throughout the season.

Small is the Vols’ go-to back and has been impressive in fall camp.

Small added 15 pounds this offseason in hopes of his body holding up over the course of a 12-game regular season. Tennessee needs it with its lack of depth behind him.

Jaylen Wright is Tennessee’s other returning scholarship running back and injuries have been the story of his fall camp. The sophomore was a limited participant in contact drills throughout the open periods of practice this August.

Tennessee running back’s coach Jerry Mack said the Vols are confident Wright will “be ready by the time we enter the first game.”

That’s the good news, as is the fact that the speedy Wright added serious bulk to his frame after rushing for 409 yards and four touchdowns as a freshman. Wright has a sky high ceiling and is one of college football’s “freaks”.

Behind Small and Wright are Tennessee’s freshmen.

Justin Williams-Thomas enrolled early in January after signing with Tennessee over Auburn. The 6-foot, 210-pound running back went through spring practice and gives the Vols’ a bruising body that they don’t possess.

“From a standpoint of him running with more confidence, we saw flashes of the Justin we saw in high school,” Mack said of Williams-Thomas. “We saw him have an explosive play in the scrimmage the other day. We saw him being able to catch the ball out of the backfield a little bit today in practice, doing some things like that. I think where he has to get better is, where all young guys usually have to get better, and that’s pass protection.”

Dylan Sampson is Tennessee’s final scholarship running back and one of the intriguing surprises of fall camp. Sampson didn’t participate in spring practice and was just a three-star compared to Williams-Thomas’ four-stars.

However, Sampson has impressed in fall camp and earned an abundance of buzz about his play. The Louisiana native is fast, can create big plays and catch the ball out of the backfield.

There may not be a player I’m more intrigued to see inside Neyland Stadium than the 5-foot-11, 190-pound ball carrier.

“He’s done a great job,” Mack said of Sampson. “He’s kind of a fan favorite right now in the building with his attitude, personality, which we knew when we recruited him. Every day he comes out there, it seems like he does something really good with the ball in his hands. Explosive plays. We talked about him being a guy that was going to have those sexy runs, those long, explosive runs, and he’s held true to form.

“He’s that guy that every day in practice, he’s been coming out there and he finds a way to get through those small creases. You know, he’s a smaller back but he gets to top end speed really fast. We’ve been really impressed with his natural vision and his natural patience as a runner.”

We know Small is the lead back and while the roles of the rest of the running back room are unclear, the Vols will need all four scholarship running backs throughout the course of the season.