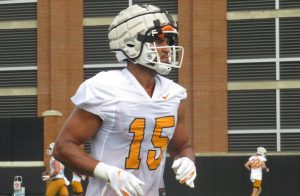 At the time of this writing, at 1:00 p.m. ET on a Monday afternoon, the #FreeBruMcCoy movement has been popping up on Twitter all day.

The FreeBruMcCoy hashtag gained popularity quickly among Tennessee fans over the weekend and now sits as a trending topic on Twitter. While the hashtag doesn’t have enough momentum to jump into the Top 25 trending topics in the country, it is plenty loud enough to become a trending topic locally. 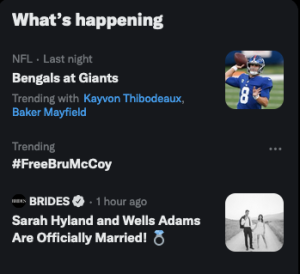 For anyone that still may not be up to speed, a topic can trend on a social media platform, such as Twitter, by generating conversation online. Whether a user is interacting with the topic, talking about the topic, or reacting to the topic, all of those interactions can cause that specific person, place, or thing to trend.

In this case, users are using the FreeBruMcCoy hashtag, a feature that allows users to look at a specific topic more easily.

The situation revolves around former USC transfer wide receiver Bru McCoy and his quest to receive immediate eligibility at Tennessee.

McCoy originally began his collegiate career with the University of Texas before transferring to the University of Southern California before his freshman season in 2019. After a number of off-the-field issues and injuries manifested during his time with the Trojans, though, McCoy elected to seek a transfer and eventually wound up as a Tennessee commit.

After initial optimism from Tennessee that their newest wide receiver would be immediately eligible for the upcoming season, the process has seemingly slowed down considerably with just over a week until the start of the season.

On Sunday evening, USC’s athletic department posted a statement on Twitter, claiming not to be holding up McCoy’s eligibility process with the Volunteers. However, since that statement was posted to Twitter, it has only added gasoline to the fire that Tennessee fans on social media have been building.

“USC has – consistent with NCAA rules – promptly and accurately responded to all requests from the University of Tennessee related to the eligibility of Bru McCoy,” the statement read. “At no point since Bru entered the transfer portal in January have we objected to him being made immediately eligible to play at Tennessee. The issue of Bru’s eligibility ultimately rests with the NCAA, and we wish him the very best.”

The post on Twitter has more than 400 replies and nearly 200 quote tweets at the time of this publication.

Tennessee fans have been strongly advocating for McCoy on USC’s socials, especially since that tweet. In the three tweets that USC Football has posted to Twitter since Sunday afternoon, each of the posts has several responses and comments from Tennessee fans.

The idea that USC went out of its way to post a statement on Twitter is indicative of the noise that Vol fans were making online. As it turns out, the barrage of tweets pertaining to Bru McCoy may have actually put some pressure on the Trojans’ athletic department.

The statement from USC also comes just two days after Tennessee head coach Josh Heupel spoke about the work that the Tennessee program has put into the situation.

With Tennessee’s season opener coming up on Sept. 1, the Vols are doing everything they can to get Bru McCoy on the field as fast as possible.