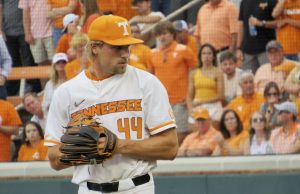 For the first time since the Knoxville Super Regionals back in June, former Vol relief pitcher Ben Joyce returned to a mound in east Tennessee this week as his Rocket City Trash Pandas opened a six-game series with the Tennessee Smokies on Tuesday.

The visiting Trash Pandas defeated the Smokies to open the series on Tuesday night by a score of 16-7. During the game, Joyce pitched a scoreless seventh inning for the Trash Pandas and struck out one in the inning.

With no outs in the seventh inning and a 2-2 count to Smokies catcher Jake Washer, Joyce rearer back and fired in a heat-seeking fastball to the upper portion of the strike zone. Washer was left walking back to the dugout after a swing and miss.

Folks, a professional fireman has been spotted back in East Tennessee 🔥🔥

While he only had one inning of work on Tuesday night, Joyce will have more opportunities to play this week. The Smokes and the Trash Pandas will face off at 6:15 p.m. ET from Wednesday to Saturday and will finish the series at 1:00 p.m. ET on Sunday.

According to MILB.com, the 6-foot-5 former Volunteer has pitched five innings in five games so far throughout his minor league career. Joyce currently has a 3.60 ERA and does have an official win with no losses under his belt.

In his first ever minor league appearance, which was against the Smokies in early August, Joyce had a difficult outing. Joyce allowed two earned runs off of four hits during one inning, skyrocketing his ERA up to 18.00.

Since then, though, Joyce has found his groove and is working his way to bring that ERA down. Joyce did not give up a single hit over his next three games and has not given up a run since that challenging debut back on Aug. 6.

The Trash Pandas’ 16 runs are a season-high for the team, which the Rocket City social media team acknowledged online after the game with a funny college football troll that is a well-known event in east Tennessee. The Trash Pandas are based out of Alabama, as well.

Felt like an Alabama-Tennessee football game out there tonight. pic.twitter.com/q2BhgMjhXs

Tennessee is certainly hoping to be the “16” when the Tide rolls into Knoxville this upcoming October.