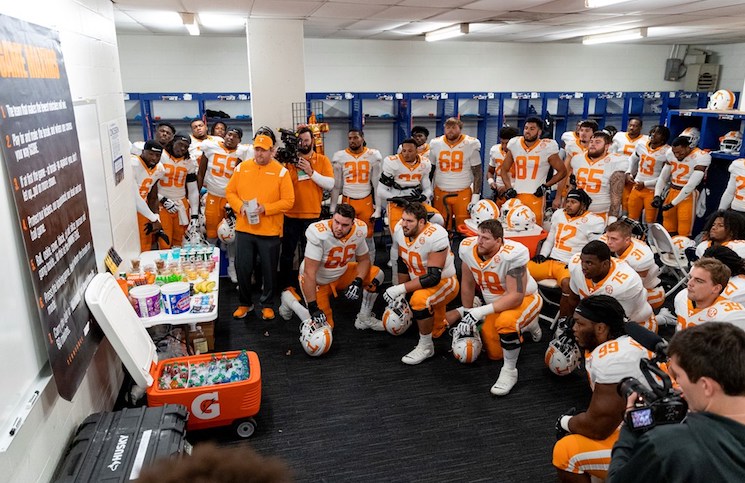 There’s more optimism around the Tennessee football program entering this season than there’s been since the 2016 Vols entered the season ranked in the nation’s top 10.

Most Las Vegas gambling books set Tennessee’s regular-season over/under win total at 7.5 with a few settling at an even eight.

Tennessee is looking to hit that over and post a breakout second season under Heupel. What could boost Tennessee to just that?

Here’s three things that would cause Tennessee to overachieve this season.

Hendon Hooker Takes The Next Step

Hendon Hooker broke onto the local and regional stage a season ago, throwing for 2,945 yards, 31 touchdowns and three interceptions in 11 starts after transferring from Virginia Tech.

Hooker bet on himself, returning to Tennessee for his fifth collegiate season instead of testing NFL waters.

The 6-foot-4 dual-threat quarterback made Tennessee’s offense formidable a season ago, but there’s plenty of room for Hooker to grow.

Combine that with the fact that quarterback is the most important position in the sport, Hooker taking the next step is an obvious propeller for the 2022 Vols.

After not being Tennessee’s starter entering last season, there’s plenty of reasons to believe Hooker can grow on the field.

“He’s been in really good command of what we’re doing offensively, keeping us out of bad plays (and) bad situations,” Heupel said of Hooker during fall camp. “He’s turning the negatives into zero, been decisive getting the ball out of his hands. He’s in complete command of what we’re doing on the offensive side of the ball. Run game, pass game and protections as well.”

So where can Hooker grow?

The Greensboro, North Carolina native can improve his consistency throwing the ball down the field and Heupel noted that broken plays have been a point of emphasis this offseason.

Tennessee’s Pass Rush Becomes One Of The SEC’s Best

Tennessee struggled to get to the passer blitzing four a season ago, but there’s optimism that pass rush could be one of the most improved aspects of the 2022 Vols.

Byron Young was a reliable edge rusher by the end of the 2021 season after missing the first two games  after transferring from junior college. Young is a Preseason All-SEC First team selection and could play his way into the first round of the 2023 NFL Draft.

Young split time with Tyler Baron a season ago, but the duo will be on the field at the same time this season after Baron moved to strongside defensive end this offseason. Baron — a former Knoxville Catholic standout — was Tennessee’s second best pass rusher a season ago before earning praise this offseason.

With Young and Baron playing at the same time and both in their second seasons with major roles, Tennessee’s starting edge rushers give reasons to believe the Vols’ pass rush will be better. If it’s going to be one of the SEC’s best, however, more names must emerge.

On the defensive line’s interior, Omari Thomas and Dominic Bailey have emerged has potential candidates to replace Matthew Butler’s production.

Then there’s the duo of freshman pass rusher— James Pearce Jr. and Josh Josephs. The duo were both four-star recruits and have impressed in fall camp. Neither is going to play their way into a starting role, but they could give Tennessee additional pass rush threats.

“Great kids just figuring it out,” outside linebackers coach Mike Ekeler said. “They’re true freshmen, they just got here. The sky is the limit for them. If they stay the course, they keep busting their tail and you are talking about two guys that are six-foot-five coming off the edge, and they can flat out go. They got great instincts and love to play the game, so beyond excited.”

Tennessee’s defense — particularly its secondary — has question marks entering the season. A strong pass rush could mask those issues and lead to a greatly improved defense.

Tennessee Progresses To The Median In One Score Games

What was impressive about Heupel’s overachieving first season is that there was more out there for the Vols. Tennessee didn’t win a bunch of flukey close games. In fact, Tennessee struggled in tight games, going just 1-3 in games decided by one possession.

Tennessee progressing to the median in tight games will give them a great chance to exceed Las Vegas’ over/under win total for the Vols.

What made Tennessee struggle in close games a season ago? It’s unwise to pinpoint just one thing, but Heupel’s discussed the Vols’ need to improve in short yardage situations this offseason.

And it adds up in this discussion, failed fourth down attempts against Pitt and Purdue cost Tennessee. Improved short yardage offense — among many other things — would lead the Vols to more close game success in Heupel’s second season.

Tennessee’s season will likely come down to five games that either team could win: at Pitt, vs. Florida, at LSU, vs. Kentucky and at South Carolina.

Posting a positive record in these five games will almost assuredly lead to Tennessee showing second year growth in the win column.