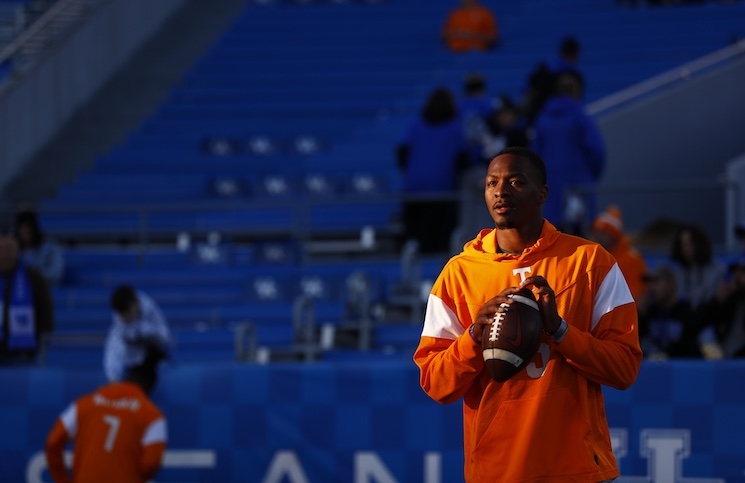 Hendon Hooker was looking for a reset when he transferred to Tennessee in January 2021 just 11 days before head coach Jeremy Pruitt and his entire staff were ousted.

Injuries and an in-season quarterback battle contributed to average play in Hooker’s junior season at Virginia Tech and the quarterbacks eventual transfer.

Choosing Tennessee in the midst of an internal investigation into illegal recruiting under Pruitt, Hooker’s time in Knoxville quickly handed him a dose of adversity.

Tennessee fired Pruitt with cause while offensive coordinator Jim Chaney and the rest of the coaching staff were subsequently let go.

Heupel made an immediate impression on Hooker.

“From day one, coach Heupel came in with the attitude of: we want to win ball games and that’s what I’m here to do,” Hooker said Wednesday. “As well as just being aggressive, so to speak, and what I mean by that is just having a mindset to just go out there and try to dominate. That’s what I try to do when I approach the field and play like it’s my last.”

However, Hooker got his chance week two and didn’t look back. The Virginia Tech transfer sparked the Vols in their week two loss at Pitt and started the final 11 games of Heupel’s inaugural season.

More From RTI: Could Tennessee Be Back In Play For Carnell Tate?

Together, Heupel and Hooker propelled Tennessee to an overachieving 7-5 regular season breaking an abundance of program offensive records in the process.

Hooker’s decision to return to Tennessee for a fifth-and-final college season has sparked optimism levels unseen in Knoxville since 2016.

It’s not just Heupel’s offensive prowess or competitive intensity that makes Hooker view his head coach as the nation’s best, but his listening ability and caring nature.

“Him bringing that (competitive) approach to the team, as well as being a great listener,” Hooker said. “Understanding what the team needs in every aspect, not just in the building but in life as well. You never know what some of the players are going through. So, just him being very appealing to every player and very down to Earth. I think he’s the best coach in America.”

Hooker praises Heupel for an area many players have praised the second year head coach. From his inaugural meeting with the team to his implementation of alternate uniforms, Heupel’s prioritized his player’s opinions and his relationships with them.

Tennessee hopes those strong relationships amongst the team and its coaches will bolster the Vols to a breakout second season under Heupel and bolster Hooker to the NFL.

Heupel, Hooker and the Vols open their 2022 season on Sept. 1 against Ball State.