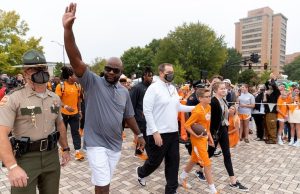 After months of waiting, the Tennessee Volunteers season-opener is right around the corner.

Tennessee will open up the 2022 football season against Ball State in Neyland Stadium this Thursday, Sept. 1.

For a second consecutive year, Tennessee will be opening up the season on a Thursday night. With the majority of college football teams opening up the season this coming Saturday, playing the game on Thursday will give the Vols a chance to show off their brand to an audience with less competition to watch on television.

With any Tennessee gameday comes exciting activities around the University of Tennessee campus. Traditional favorites such as the Vol Walk and Pride of the Southland Marching Band performance will be back this year, with some new additions such as bonus tailgating opportunities around campus.

Once inside the stadium, fans will immediately notice several new additions, enhancements, and features, including the brand new lower west club and the upper north social deck.

Here is a look at the schedule of events for this Thursday’s gameday in Knoxville:

5:20 p.m. ET – The Pride of the Southland Marching Band will perform on Pedestrian Bridge