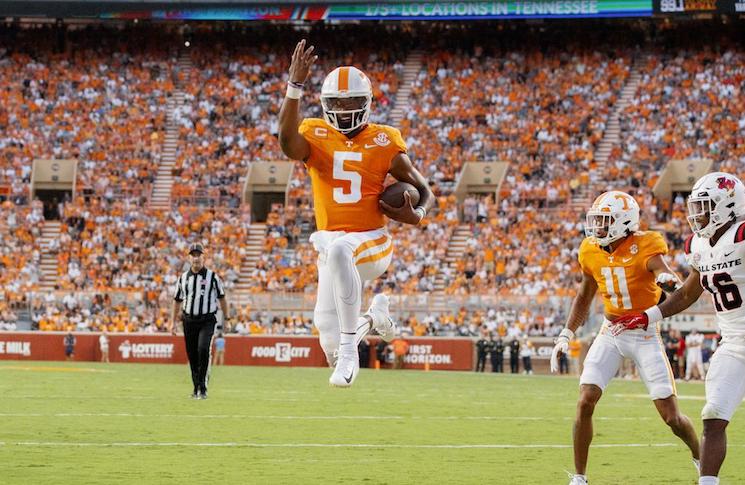 Tennessee opened up its 2022 season with a 59-10 victory over Ball State. Each week, we’ll share how the Vols graded out according to Pro Football Focus grades.

Here’s how PFF works, the company grades each player on every play from a scale of negative two to two in 0.5 increments. Here’s how the company defines the benefits of their grading system.

“Taking every play into consideration allows for a larger sample size of data to tell the proper story rather than just a highlight reel of plays that we tend to remember, for better or worse. We also work to eliminate bias by not caring about the level of player who is being graded, so whether it’s the best tackle in the league missing a block or one of the worst, the same grade is given. Preconceived level of ability has no impact on the grading system. This style has worked well in unlocking undervalued gems through the years, while also not being swayed by player hype if it is undeserved.”

With that, let’s see how Tennessee graded out against Ball State

The first thing that stands out about Tennessee’s offensive grades is the lack of elite grades and the abundance of good grades. No one graded out exceptionally and besides Jerome Carvin and Princeton Fant no one graded out particularly poorly

Quarterback Hendon Hooker led the way and that could be a common theme this season. The super senior quarterback was in complete control while throwing for 222 yards and recording four total touchdowns to zero turnovers.

How about Ramel Keyton? The senior receiver had little buzz in fall camp but a nice opener, earning the highest grade of any Tennessee receiver. The same could be said for Jackson Lampley. The back up offensive lineman had a strong night while playing the most snaps of his career.

Receivers Squirrel White and Walker Merrill didn’t quite earn 20% of offensive snaps but I feel like their grades are relevant. White graded out at 66.7 in 15 snaps while Merrill graded out at 56.0 in 13 snaps.

We knew Tennessee was going to play more defensive players this season, but I didn’t anticipate 26 players playing over 20% of the snaps in the season opener.

Aaron Beasley performance was impressive live and the grades backed it up. The linebacker tallied eight tackles with most coming in the first half. Along with corner Kamal Hadden, Beasley led the way in PFF’s grades.

Tennessee played a lot of freshman and some of them early in the game. Both Joshua Josephs and Christian Harrison turned in strong Volunteer debuts.

It was a tough night for Jeremy Banks. The senior linebacker turned in the worst grade of any Tennessee defender that played over 13 snaps.