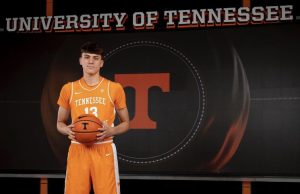 On Friday morning, Tennessee Basketball received a commitment from four-star class of 2023 prospect JP Estrella. The 6-foot-11 center brings a unique combination of size and athleticism to Tennessee’s recruiting class and fills an important spot on the court.

Estrella is a strong rim protector, has nice touch around the rim, and even has range behind the perimeter – something that has rapidly become more and more valuable for that position. The newest Tennessee commit has solid footwork on the inside and a smooth hook shot. However, at the same time, Estrella has been described as a very talented passer with great vision, which is all evidenced in his Middlesex Magic highlights.

According to 247 Sports composite rankings, Estrella is listed as the No. 40 overall player in the class of 2023 and the No. 7 center in the class.

“They’ve been there pretty much from day one,” Estrella said about Tennessee during his announcement. “They were my third offer. They’ve just been there for me throughout this whole thing. I talk to them, their staff, almost daily. Facetime calls, calls, texts. They do the same thing to my parents. They text them every day and call them every day. The relationship I’ve built with them is just something you couldn’t even ask for.”