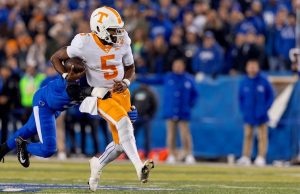 Tennessee quarterback Hendon Hooker has more control of the playbook here in his second year in the Josh Heupel offensive system.

Despite how dynamic Tennessee’s quarterback was while finishing the season as the SEC’s highest-rated quarterback, it was just Hooker’s first year in the system, and he didn’t even begin the year as the starter. With Hooker moving into his second year in the Tennessee offense now, the Vols’ coaching staff has completely opened up the playbook for their star quarterback.

“Yeah, with Hendon, he’s at the point right now the way he’s playing, you got an open book with him, you feel comfortable,” Tennessee quarterbacks coach Joey Halzle said on Tuesday.

While Tennessee certainly wasn’t diving into their whole playbook against Ball State, Hooker still looked smooth and in control during the victory. Hooker threw for 221 yards and two touchdowns on 18-of-25 passing. Additionally, Hooker also added in two rushing touchdowns with his legs.

With the rising expectations surrounding Tennessee’s offense, the Vols’ confidence in Hooker is also growing. Halzle said on Tuesday that while Hooker does have an open playbook, he also has the authority to take out certain plays without question or hesitation from the coaching staff.

“He’ll operate anything you put him out there (in), and the other thing is what we’ve talked about on his confidence side of it – he will now let us know, if he’s like ‘hey, I’m not comfortable with that, I don’t like that’ – and we know if he’s saying that, it’s gone. He’s not just saying it because he’s uncomfortable or he’s worried about it. He’s like, ‘nah, I don’t like this, it doesn’t fit. I don’t like how it’s timing up.’ Cool, it’s out.”

“So, we have that kind of bond and rapport now where we can call anything,” Halzle said. “He trusts us that what we’re putting in the game makes sense and then if it doesn’t work for either one, we can pull it, which makes it on our end a lot easier to game plan on the front end.”

Tennessee is gearing up for its game against Pittsburgh this upcoming Saturday, which marks an important moment in the career of Hendon Hooker. It was the Pittsburgh game last year where Hooker officially took over for an injured Joe Milton III in the second quarter and wound up leading the Volunteers for the entirety of the season.

On Tuesday, Halzle recalled the conversation he had with Hooker before going into the game against the Panthers last season.

“The conversation with him was just like, ‘hey man, you know whenever you’re the backup quarterback, I experienced the same thing, you’re always one play away. We knew this was a chance, here’s what we’re doing, here’s what we’re seeing, go take it.’ We didn’t have a separate game plan between him and Joe (Milton),” Halzle said. “We had what we had, and we called it, and were basing on the looks we were seeing. That part, there wasn’t much of a difference, and it was just really the conversation, you can’t make it too big of a deal. This is always an opportunity in football that this could happen. Here it happened and go play.”

Hooker and the Tennessee Volunteers will travel to Pittsburgh to take on the Panthers this upcoming Saturday afternoon.