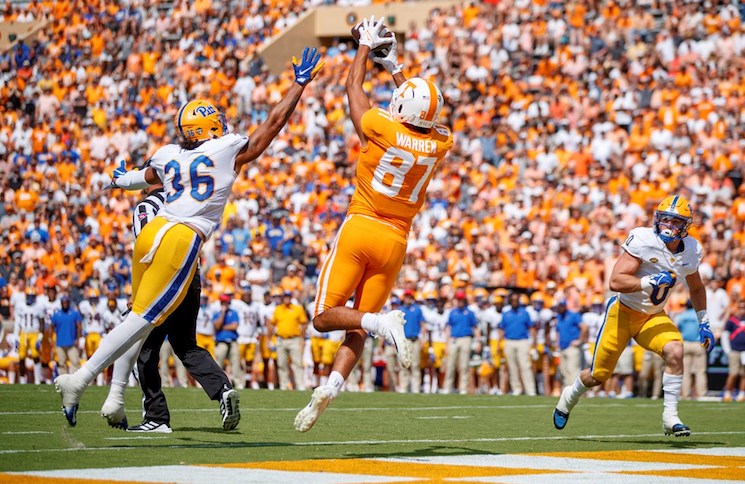 Up tempo offenses are a normal in college football in 2022. Up tempo offense like Tennessee are not. The Vols play at a completely different level of fast and Pitt is well aware of it entering round two of the Johnny Majors Classic.

“This group is different,” Pitt defensive line coach Charlie Partridge said. “They have it down to a science. You watch their players after a play, you may have one of the referees on the sideline begging for the ball but he is being ignored as that player is throwing it to the umpire so it gets set that much faster. They truly have it down to a science and when you’re getting that thing off at an average of 12 seconds, you’re operating at a level that really can’t get much faster within the rules.”

Both Tennessee and Pitt’s coaching staffs are very similar with one another. Saturday’s matchup in the Steel City will be the fourth meeting between Josh Heupel and Pat Narduzzi dating back to 2018 when Heupel was at Central Florida.

UCF trounced Pitt with a 31-point first half in the first matchup and Pitt’s coaching staff learned a lesson about facing Heupel’s style of uptempo offense.

“Thankfully, we’ve faced these guys, really in our minds, for the fourth time now going back with Heupel to Central Florida,” Partridge said. “We learned a hard lesson down in Orlando that first year that whatever your plan is you better make sure it is tight and concise and you don’t get too cute in terms of what you’re trying to do schematically so the kids can operate and communicate extremely quickly.”

While Pitt won two of the first three matchups against Heupel — including last year’s thriller inside Neyland Stadium — Heupel’s offenses have scored 31 or more points in all three meetings.

More From RTI: Tennessee Announces Uniforms For The Pitt Game

Tennessee is set up to be even more efficient with its tempo in Saturday’s matchup than it was a year ago due to the Vols’ offensive continuity this offseason and the return of starting quarterback Hendon Hooker.

“Last year at this time, on average we timed how long it take them from whistle too snap and they’re four seconds faster than they were a year ago,” Partridge said. “They’re back into that realm they were at Central Florida which makes sense because a year ago we were facing them after one game together. Now we’re facing them after 14 games together so it’s really not a surprise to us that they’re operating at that optimum speed.”

Tennessee won’t be the last up tempo offense that Pitt faces this season, but it will be the most efficient. If Pitt isn’t ready to face it, it could be a long afternoon for the touchdown underdog Panthers.

“They do it as good as anybody in the country,” Partridge said.