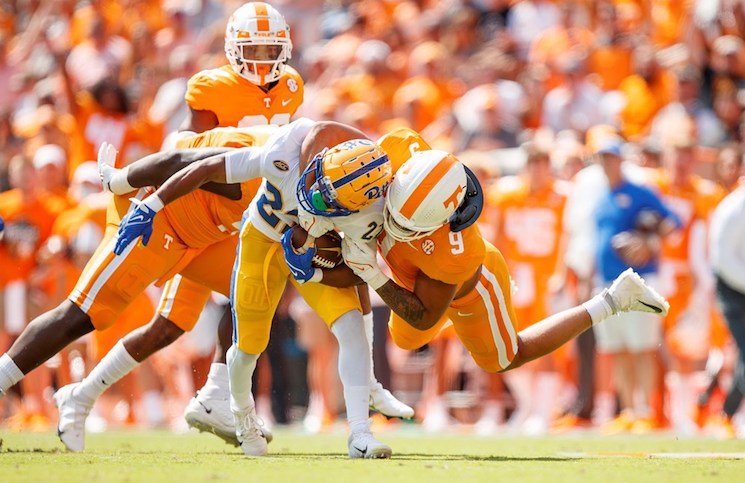 Tennessee travels to Pittsburgh Saturday in the first major test of the season. The Vols look to avenge last season’s home loss by earning their first road win of the 2022 season.

We move on to Pittsburgh.

Last week, for the Ball State prediction, I figured Tennessee’s offense would overwhelm the Cardinals’ defense and provide for a drama-free day at the office. The “overwhelming” aspect is also where I find the confidence in picking Tennessee over Pittsburgh.

There are a few games on Tennessee’s schedule that I look at as “First to 38” games. The Vols scored 38 points or more in all seven of their wins last season. Only once did Tennessee score more than 38 and lose, which was to Purdue by a score of 48-45 in overtime of the Music City Bowl. Additionally, Florida scored 38 while defeating Tennessee last year. “38” just seems like a good number when working with the Tennessee football team at the moment.

That all being said, with Tennessee’s defense still relatively unproven heading into the second week of the season, and linebacker Juwan Mitchell still questionable for Saturday, I think this is going to be one of those “First to 38” games.

I think Tennessee’s offense will naturally score on Pittsburgh and Tennessee’s defense will have a big challenge ahead with Pitt’s offense. Ultimately, though, I see this being a high-scoring shootout. And with that, I think Tennessee narrowly wins an exciting game. I imagine only a touchdown or less separates these two teams by the time the clock hits zero, one way or another.

Tennessee’s first major test of the 2022 season is here as the Vols travel to Pittsburgh looking to avenge last season’s loss in the Johnny Majors Classic. Both teams have extreme familiarity with each other. Josh Heupel is facing Pat Narduzzi and Pitt for the fourth time in his five year head coaching career while Hendon Hooker is facing the Panthers for the fourth straight season. Can that familiarity help Pitt avoid a poor start like many have fallen victim to against the Vols’ uptempo offense?

While there was little to glean from Tennessee’s season opener, Pitt’s week one matchup against West Virginia gave us a real look at the Panthers. Two areas Pitt expected to be major strengths looked suspect in the opener. The veteran led offensive line gave up five sacks while the Panthers failed to tally 100 yards on the ground. On the other side, West Virginia ran for nearly 200 yards against a Pitt defense that prides itself on stopping the run. If either of those trends continues this week than I have a hard time seeing Pitt winning as home underdogs. Give me the Vols to win but Pitt narrowly covering.