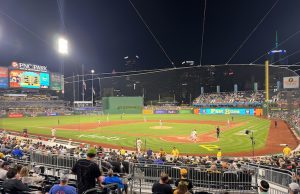 Tennessee fans at the Pittsburgh Pirates vs the St. Louis Cardinals on Friday night in Pittsburgh. Photo by Rocky Top Insider.

Tennessee fans were loud and proud in PNC Park on Friday night in Pittsburgh, Pennsylvania.

In anticipation of Saturday’s game against No. 17 Pitt, quite a few Tennessee fans made the trip up to Pittsburgh on Friday. Many of those fans ended up at the Pittsburgh Pirates home game against the St. Louis Cardinals on Friday night.

Tennessee fans we’re making noise all night long in the ballpark. From the chorus of Rocky Top to “It’s Great to be a Tennessee Vol” chants, the Tennessee fanbase is certainly putting its stamp on the city of Pittsburgh this weekend.

The Pirates defeated the Cardinals by a score of 8 to 2. Tennessee is certainly hoping the road team has a little more success on the gridiron when it comes to the college football game on Saturday in Pittsburgh.

Pittsburgh was painted orange on Friday night, as expected with a road team like Tennessee playing a team in a location that they have never done before.

The Panthers and the Vols will square off Saturday afternoon at 3:30 p.m. ET.

More from RTI: No. 24 Tennessee @ No. 17 Pittsburgh: How to Watch, Odds, Key Statistics