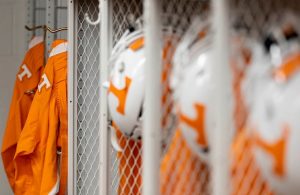 The Vols found a massive Top 25 ranked win on the gridiron on Saturday afternoon in Pennsylvania.

Despite a wave of momentum swings throughout the game, No. 24 Tennessee held strong and took down No. 17 Pittsburgh in overtime by a score of 34-27 on Saturday.

After the game, two of Tennessee’s top offensive stars met with the media for a few moments to discuss their thoughts on the game. Tennessee quarterback Hendon Hooker and wide receiver Cedric Tillman both broke down the Vols’ win on Saturday and talked about some of the specific plays that went into the victory.

“Big-time players make big-time plays in big-time moments,” Tillman said about the go-ahead touchdown reception in overtime while having a laugh. “No, but in all seriousness, I knew my number was going to be called. Obviously, I wasn’t too happy with some of the plays I put out on the field. Especially some of the passes I didn’t make plays on – 99 percent of the time I’m making. But we talked about facing adversity all week. What happens when you face adversity? You’ve got to come and push through. We did that at the end. A great team win.”

Check out the full interviews from both Hendon Hooker and Cedric Tillman after the win below.