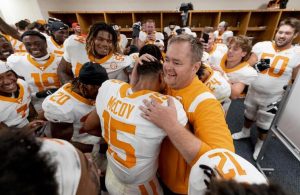 Tennessee in the locker room after defeating Pittsburgh on the road. Photo By Andrew Ferguson/Tennessee Athletics.

The Tennessee Volunteers are big-money draws, once again.

On Tuesday morning, ESPN’s public relations Twitter account posted an infographic with some of the most-watched week two games across the college football landscape.

According to ESPN’s tweet, Tennessee’s game against Pittsburgh was the second most-watched game of the entire weekend. Additionally, it was also the most viewed game on the ESPN networks during that stretch. The Vols and Panthers drew an absolutely astounding 4.5 million viewers.

The Vols’ game also beat out a Top 20 matchup between two of their SEC East rivals, Kentucky and Florida. The Wildcats’ victory over the Gators drew 4.3 million viewers in the 7:00 p.m. time slot. In comparison, Tennessee’s game was in the afternoon time slot at 3:30 p.m. ET.

Tennessee is putting together a must-see product on the field. For good or for bad, although more often for good, the Vols are dripping with excitement on the football field. Josh Heupel’s fast-paced, up-tempo offense provides for high-scoring games for both Tennessee and, usually, the opposition. Tennessee scored more than 38 points in NINE of their 13 games last season. The Vols have followed that up with a 59-point game and an overtime Top 25 win on the road so far in the 2022 season.

Not a bad set of ingredients to stir up viewership numbers.

The Vols will be back in Neyland Stadium this Saturday night before turning their attention to Florida next Saturday afternoon. With the way the Vols have been playing, and the proven numbers that are already on the board, Tennessee’s game against Florida could certainly wind up a College GameDay destination as well.