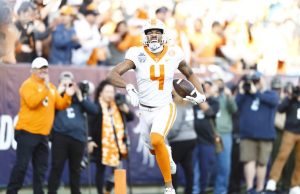 After Cedric Tillman’s dominating game against Pittsburgh last Saturday, including the go-ahead touchdown in overtime, the Tennessee wide receiver dropped one heck of a memorable line.

Tillman immediately went on to say that he was just messing around as he was clearly running from a high off the game. But, at the same time, Tillman definitely said that line with a little bit of a chip on his shoulder. And who could blame him?

Cedric Tillman went from a two-star recruit to a backup receiver to one of the top wideouts in the entire SEC. It has been quite the career for the Las Vegas native.

That swagger that Tillman has, and the confidence that the entire team has, is something that offensive coordinator Alex Golesh values. But that’s something that can’t be given. Instead, it has to be earned.

There’s a difference between saying it and being about it, though.

Although he was the one that made the statement originally, it’s not just about Tillman. It’s about Jalin Hyatt, Bru McCoy, and the rest of the receiver room. It’s about Hendon Hooker, Jabari Small, Jaylen Wright, and the entire backfield. It’s about the offensive line.

A chain is only as strong as its weakest link, and Tennessee’s offense is no different. With the pace and tempo the Vols play at, each of the 11 men on the field has to be executing their task. And when that happens, success usually follows. Consistent success turns into confidence, and confidence turns into swagger.

“For Cedric to say that jokingly or not, I hope they are the best at their position in the entire country,” Golesh said. “We need them to believe that. He’s certainly really good, and you could make an argument that he is the best in the country. For us, it’s important that all of those guys continue to get better. Big-time players do make big-time plays in big-time games. He certainly did there, so did Hendon Hooker, so did the five guys blocking their tails off, so did the guys next to him, so did the running back who picked up the protection and so did the coaches who helped prepare them.”