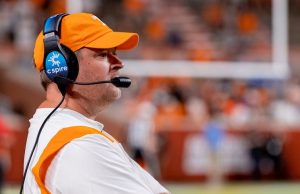 Tennessee was originally scheduled to take on the Sooners in Norman during the 2020 season, with Oklahoma traveling to Tennessee in 2024. Due to the shortened COVID 2020 season, that original 2020 matchup did not happen. After the latest recommendation from the SEC, the 2024 matchup will be off the table as well.

The SEC’s recommendation stemmed from the idea that Texas and Oklahoma will be joining the conference in 2025, at the latest. Therefore, having those games on the schedule in advance would interfere with the conference schedule once both of those teams are officially in the league.

“While we are disappointed that we won’t be hosting Oklahoma in 2024, we are extremely excited about the marquee games that Oklahoma and Texas will bring to Neyland Stadium in the future as fellow members of the Southeastern Conference. In the meantime, we are actively exploring the best possible replacement opponents for 2024,” Tennessee athletic director Danny White said in a statement.

Georgia was set to travel to Norman to play Oklahoma in 2023, which does not look like it will be happening anymore, either. The Bulldogs have announced they will take on Ball State in 2023 instead.

It will be interesting to see who Tennessee reschedules for that open 2024 non-conference slot. There are a few suspects, though. North Carolina State, Duke, Rutgers, and Northwestern are all Power 5 teams that do not have a marquee Power 5 non-conference opponent scheduled for that season.

Anyone up for a meeting with Duke in Charlotte? That seems like an option that could come to fruition.

Tennessee’s non-conference opponents in future years are as follows: