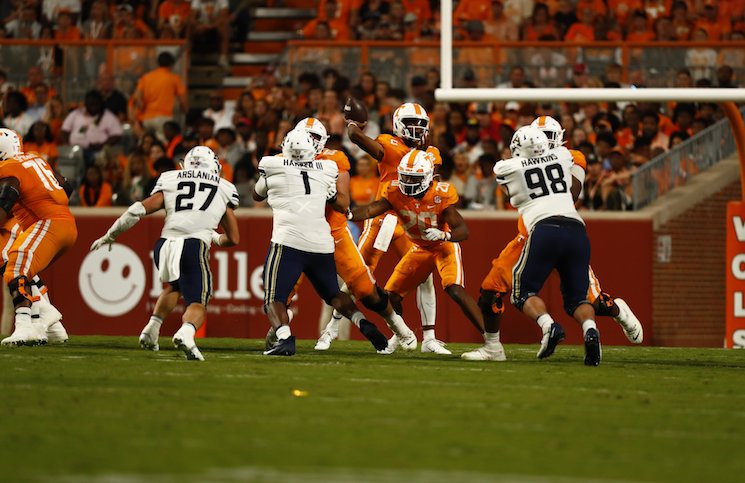 Tennessee made quick work of Akron Saturday night, jumping out to a 35-0 halftime lead before cruising to a, 63-6, victory. The home win moves the Vols to 3-0 on the season ahead of next weekend’s showdown with Florida.

The two most important keys for Tennessee Saturday was to secure a win against Akron and stay healthy heading into a critical stretch of SEC games.

It took two plays for point number two to come into jeopardy. After rushing for 11 yards on the first play from scrimmage, Jabari Small ran for three yards on play two and was slow to get up.

Trainers came out to help Small off the field where he immediately went to the medical tent. Small didn’t stay in the medical tent long before working his way to the stationary bike.

Small never retreated to the locker room and didn’t take his pads up but never returned to the game.

That could easily be cautious coaching with Small unneeded to secure a win against the bottom tier MAC opponent but is worth noting.

Cedric Tillman went to the medical tent early in the game when he got rolled up blocking on a Dylan Sampson touchdown run.

The senior receiver returned to the game on the next drive but his day of injury concerns was not over. Tillman caught a high Hooker pass and was hit low as he landed. Tillman immediately held his knee after falling to the ground and eventually walked off the field on his own power.

Tillman did not return to the game.

During halftime, Heupel said he didn’t expect either injury to be serious long term while confirming neither will return to the game.

Will have full updates on Small and Tillman’s status postgame and this coming week at Rocky Top Insider.

Hyatt got behind the Akron defense for a 57-yard touchdown early in the second quarter before beating his man on a slant for a 48-yard touchdown to stretch the Vols’ lead to 35-0 at the half.

The South Carolina native has been a major part of Tennessee’s offense early in the season but Akron proved to be Hyatt’s best performance so far. While Hyatt had a career day by halftime, he hauled in a 47-yard pass on the first drive of the second half.

After that drive ended in the checkerboards, Hyatt’s day was done with five catches for 166 yards and two touchdowns.

Dylan Sampson is just three games into his career, but it was the Louisiana native’s best performance. Sampson looked fantastic running the football on his way to 55 yards and two touchdowns in the first half.

The freshman exited the game late in the third quarter with what appeared to be a minor injury. The freshman running back ended the day with 57 yards on eight carries.

Tennessee’s defense played its best game since Josh Heupel and defensive coordinator Tim Banks took over in last week’s win at No. 17 Pitt.

Against a much lesser challenge, Tennessee kept its momentum going. The Vols held a bad Akron offense to six points in a game where the Zips had 13 possessions.

The Vols controlled the line of scrimmage, holding Akron to just 26 rushing yards while recording 11 tackles for loss.

Akron found some success in the passing game — particularly with defensive back ups in the game— but never found major success.

Much like the Ball State game, Tennessee played an abundance of young defenders especially in the second half.

This is a bad Akron offense so there’s little you can glean from the performance. However, it’s a good confidence boost heading into SEC play.

After missing the first two games of the season, Juwan Mitchell made his 2022 debut against Akron. Not only did Mitchell play against the Zips, but the former Texas linebacker earned the start beside Aaron Beasley.

Jeremy Banks checked in after the first play of the game but came in for Beasley and not Mitchell. Whether it was emphasis on getting him snaps ahead of Florida or something else, Tennessee clearly wanted to give Mitchell an abundance of opportunities in the matchup.

Mitchell didn’t light up the stat sheet, recording just one tackle and one quarterback hurry, but it was interesting that the Vols’ coaches turned to Mitchell so early in the game.