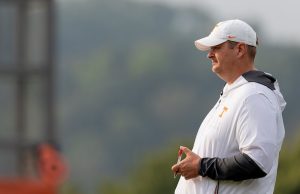 Tennessee head coach Josh Heupel and Florida head coach Billy Napier both spoke to their respective media outlets on Monday ahead of the highly-anticipated showdown on the football field this Saturday afternoon in Knoxville.

Heupel knows how important this game is for Tennessee. And it didn’t take long for him to learn first-hand, either.

“Probably 30 seconds after I arrived here on campus,” Heupel said about the first time someone brought up Florida to him. “This is one of the ball games that this fanbase and our players point to, too. Obviously, being a fan of college football, I’ve seen the great games and the rivalry itself play out. That’s why you come here. You want to be a part of these types of games. You want to have an opportunity to have College GameDay on your campus and be the prime-time slot and have a sold-out stadium. We’re excited to see the fan base and Vol Walk, I know will be electric, and when we run out of that T, there won’t be a better atmosphere in college football.”

With as important as the rivalry is, though, it has been fully one-sided over the last nearly 20 years. Florida has won 16 of their last 17 games against Tennessee, with the Vols’ lone win coming in 2016.

Heupel isn’t concerned with past records and past games, though. That isn’t just for this week either. Since his first game on Tennessee’s campus, Heupel has always held the mindset that the next week is the most important.

“I don’t believe that,” Heupel said on if there is a psychological hurdle for Tennessee to get past against the Gators. “Each week is different, each day is different, each season is. For us, we’re however many months into our program, right here right now, and our kids are extremely confident, as they should be. They prepare the right way, they work hard, we have continued to grow. They know that the preparation is going to be the most important thing. It is going to be a great atmosphere. We have got to be able to control our emotions during the course of the football game but compete and not go up and down during the course of the game.”

Tennessee is going to put a good football team on the field… and Billy Napier knows that. The first-year Florida coach is facing a tough challenge, but one that isn’t unfamiliar to Heupel. Napier’s first game of this historic rivalry will be on the road, which is not an easy place to be.

“Tennessee has got a good football team,” Napier said in the opening of his Monday press conference. “You can see where coach Heupel and his staff have improved in their time there. They’re a lot cleaner product in all three areas of their team on film. Much cleaner football – offense, defense, and special teams maybe compared to last year. This is a veteran team that we’re playing against, starting with the quarterback on offense and a number of players on defense that have played a lot of football.”

“They’re a deep team,” Napier said about Tennessee. “They play a lot of players, especially on the defensive side. And I do think they do a good job in the kicking game. So, got to go play at their place. Very familiar with Knoxville and certainly the challenges that come with that. Good football team, you know, it’s going to be a challenge and we look forward and embrace that.”

No. 11 Tennessee will host No. 20 Florida this Saturday afternoon at 3:30 p.m. inside Neyland Stadium.