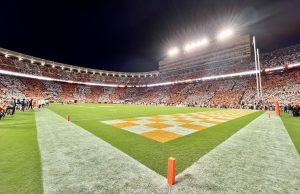 Ahead of the Vols’ College GameDay matchup with Florida this Saturday, Quinn, now an analyst with CBS Sports HQ, spoke about his time playing inside of Neyland Stadium and how it is the loudest stadium he has ever played in.

“And look, I’ve been to Neyland Stadium, I’ve played there – that is the loudest place I ever played,” Quinn said on CBS Sports HQ. “I swear to God, our center turned around on third down in the third quarter, and he looked at me like, ‘The ball is moving.’ It was so loud, no one outside of my guards could even hear me under center. It’s going to be a tough, tough environment to play with the way Tennessee and Hendon Hooker have this thing going on. I’m going to go ahead and lay the points here with Tennessee. I’ve got to see something more out of Anthony Richardson.”

"That is the loudest place I've ever played." @Brady_Quinn says the Gators are going to struggle this weekend against @Vol_Football in Tennessee 👀 pic.twitter.com/9iIDdrpIn1

More from RTI: Does Tennessee Have To Overcome Mental Hurdle Against Florida?

As a sophomore at the University of Notre Dame, Brady Quinn traveled to Knoxville in 2004 with the Fighting Irish for a game against the Volunteers. Notre Dame would go on to win the game by a score of 17-13 as Quinn completed just 12-of-23 passes for 118 yards and one touchdown.

This is not the first time that Quinn has given such high praise to Neyland Stadium, either. And his story hasn’t changed, which means it is more than likely exactly what happened.

During a 2020 interview with 247 Sports’ Barton Simmons, Quinn recalled his trip to Knoxville in much more detail.

“My sophomore year, we had to go down to Knoxville, Tennessee for basically a night game,” Quinn said. “It was as loud of an environment as I’ve ever been around.”

“It was a 4:00 or 5:00 p.m. kick, but it got dark there pretty quick,” Quinn recalled. “It was as loud of an environment as I’ve ever been around. To get out of there with a win, and I had an uncle who played ball at Kentucky — so that was a huge rivalry for him. They drove down from Lexington, Kentucky. How excited he was. How excited we were. That was one I’ll never forget.

“My center John Sullivan turned around at one point and gave me a look. After that series, I went off to the sidelines. I was like, ‘What were you trying to say?’ He said, ‘The ball was moving. I swear to you, it was so loud, the ball was moving on the ground during third down.’ Literally, our tackles couldn’t remember anything I was saying. We tried to go silent count, but it was tough.”

Tennessee will be expecting one of its most chaotic crowds in the modern era this Saturday as they try to shut the door on the old Florida rivalry. The Vols have lost 16 of the last 17 matchups against the Gators, which has left the program and fans alike starving for a victory and a turnaround in this series.

The Vols have already announced a sellout for this Saturday afternoon’s game – 101,915 to be exact. Not to mention, Tennessee has announced that Checker Neyland will be in effect for the game.

And to even add the cherry on top, ESPN’s College GameDay will be in Knoxville for the game. The last time College GameDay was parked at Ayers Hall on Tennessee’s campus? 2016 when Tennessee took down Florida in front of their home crowd.

No. 11 Tennessee is certainly looking for a little more of that magic and a whole lot of noise this Saturday afternoon against No. 20 Florida.