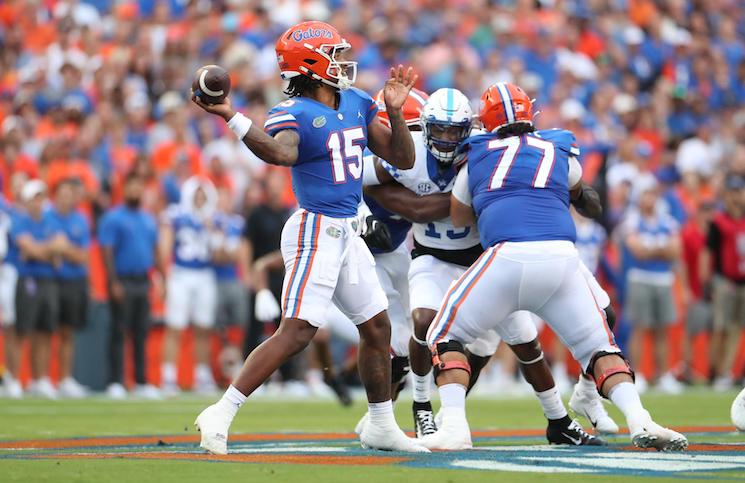 Tennessee opens up SEC play Saturday afternoon when it hosts No. 20 Florida to Neyland Stadium for a highly anticipated game.

This week, Gators Breakdown’s David Waters talks Anthony Richardson’s up-and-down season, where each team might have an edge Saturday and more.

Note: Some answers have been shortened or altered for clarity

What were the expectations heading into Billy Napier’s first season?

It was a lot of unknown. Of course you never know what you’re getting with a first year coach. You learn to maybe fix the things that seem like simple fixes going back to a year ago— reduce the penalties. A team that will go out there and play hard. I think we’ve seen that. May have not looked as pretty the last couple weeks as it did week one against Utah, but this is a team that hasn’t quit. you’ve seen fight. You’ve seen them try to figure things out along the way. The expectations were to probably clean up some of those simple things up that really hurt Florida last year. Penalties have been there but there haven’t really been huge penalties in these games.

On the field expectations as far as scheme goes, we thought maybe a run first, run focused team. Florida’s probably come out throwing the ball a bit more than we thought they would. Some of that has to do with who they’ve played and the way Kentucky played them. Kentucky’s defense came in and forced Anthony Richardson to throw. We saw from game one to game two that that wasn’t necessarily there. Came out, trusted Anthony Richardson’s arm a little more than I thought.

What have been your takeaways from the first three weeks of the season?

What a rollercoaster. You had the big win versus Utah to kick off the season and I went into that game saying the unknown of what Florida looks like could be an advantage. We had no idea what the team, what the offense was going to look like. That first game kind of played out that way. Utah was a bit surprised at how athletic Anthony Richardson could be. There wasn’t a whole lot of film on him in this offense. Then you get to Kentucky and USF, could it be Florida put film out there against Utah and those two teams were able to take advantage? I think you could throw that scenario out there, but it’s mainly been for whatever good you saw from Anthony Richardson game one, we’ve seen the complete opposite end of the spectrum in games two and three. He could not hit a throw. He couldn’t make easy throws, he couldn’t make easy reads and that really showed up against Kentucky. No consistency whatsoever. They were able to take the run game from him and USF did the same thing. Florida has been able to run the ball pretty well. Offense, so far, is going as far as Anthony Richardson goes.

What have Kentucky and South Florida done to make Richardson uncomfortable?

You saw versus Utah that Florida did a lot of play action and rolled him to the right and he’d make an easy throw. Kentucky put the blueprint out there. They really had somebody on him every time. If he rolled to the right someone was there waiting for him. Some of the easy plays they (Kentucky) were able to take away. The rollouts they like to have the option to run it if the pass isn’t there and they haven’t been able to do that. Someone has been there waiting on him. It seems like it’s affected his psyche, his mentality of how he plays football. He’s not running as much there. Teams are playing that and it’s taking him out of his game. You’ve seen teams play zone, forcing him to throw and he has not been accurate whatsoever with any consistency. It looks tough for Anthony Richardson right now. Nothing looks easy, whether it be on the ground or whether it be through the air.

What are the strengths and weaknesses of Florida’s defense?

The strength is the secondary and this will be the first game that they’re tested. That’s not to say they’ll go out and succeed but the biggest strength of Florida’s defense is that secondary led by Jason Marshall who we haven’t heard much from this year because he’s been good and teams haven’t really been able to test Florida. That’s just been who they’ve played. Utah doesn’t throw the ball a whole lot. Kentucky doesn’t throw the ball a whole lot. USF is the same and when they did throw they paid for it. The strength is the secondary but at the same time they haven’t really been tested all that great yet. They’ll get their first pick test this week.

The weakness — which is really showing up right now — is the weakness three games into the season. Florida up front is really lacking any difference makers. Gervon Dexter is proven and he’s proven to be a good player but he can’t do it by himself. You’ve seen him double teamed all season so far. Teams know where to go to stop Florida’s playmaker on defense. He’s done good when he’s had the opportunity but he just rarely has that opportunity. Florida needs someone else to step up on a consistent basis to help him. Brenton Cox can cause plenty of chaos— we’ve seen that, but not on a consistent basis. Florida is just really really thin with experience at the linebacker position. Ventrell Miller went down with an injury against USF and you could tell Florida missed their leader and best linebacker right away. Lots of questions on the front seven for Florida and not a lot of depth.

What’s a matchup you think Florida can exploit against Tennessee?

Tennessee’s game against Pitt showed that they can be run on a little bit. That’s only one game but it’s the toughest game Tennessee has played so far. Florida, for all its faults on offense and at quarterback, have been able to run the football pretty well. I don’t think they’ve done it enough and now they’re headed to Tennessee to face this high tempo offense that you want to keep on the sidelines. At the same time, I think Florida sneakily leans on the run game a little bit more. It is successful with Montrell Johnson and Trevor Etienne out there. Those two guys have really showed up in the Florida run game and with a very experienced offensive line up front, I think with who Florida is playing there might be something there to take advantage of.

What’s a matchup you think Tennessee can exploit against Florida?

I think it goes the other way. I think Tennessee can run the ball on Florida. Florida has not proven whatsoever that they can stop the run so far this year. I know Tennessee’s passing game gets all the highlights, but Josh Heupel likes to run the ball. Watching these first three games of Florida’s defense, it looks a lot like last year’s Florida team does. That means not being able to stop the run. It’s just been continuing this year. All those issues that I mentioned on Florida’s front seven, I think Tennessee is going to come into this game and really try to exploit that as well. They have not proven yet that they can stop the run with any sort of consistency. They did do okay against Kentucky and that offense but Utah in the second half was able to run it up-and-down the field. USF was able to run it up-and-down the field the entire game. That front seven is still a big worry. I know Tennessee hasn’t run the ball great this year but I think this can be a get right game for the Tennessee rushing attack.