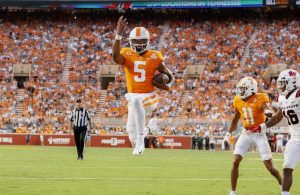 The Heisman Trophy club is an elite fraternity. That’s why Heisman Trophy winners have so much weight to what they say when they speak out about current Heisman hopefuls. And that’s exactly what former Baylor quarterback Robert Griffin III did for Tennessee quarterback Hendon Hooker on Saturday.

After Hooker’s elite performance while leading No. 11 Tennessee to a 38-33 victory over No. 20 Florida in Knoxville, Griffin tweeted out a simple statement to announce Hooker’s arrival on the scene.

On Saturday, Hooker finished the Top 25 game with 349 passing yards and two touchdowns on 22-of-28 passing. The second-year Tennessee quarterback also added in 112 yards and one touchdown with his legs.

But it goes back even further.

In his 16 total starts as the quarterback of Tennessee, Hendon Hooker has 38 passing touchdowns to just two interceptions. Hooker is a cerebral passer, a shifty runner, and a leader among his peers. And now, Hooker has led Tennessee to a 4-0 start to the season for the first time since 2016.

“Hendon was fierce,” Tennessee head coach Josh Heupel said about his quarterback after the Florida victory. “He played like a warrior tonight. We had a lot of guys that did that tonight, but Hendon was relentless in the way he competed. Obviously, it was well enough to play the way that he did. He played at an unbelievable and elite level.”

Tennessee will now have the opportunity to rest up during a bye week before traveling to Baton Rouge to take on LSU on Oct. 8.

The Vols defeated the Gators by a score of 38-33 on Saturday afternoon in Knoxville.

Hendon Hooker is the runaway Heisman Favorite after todays performance.