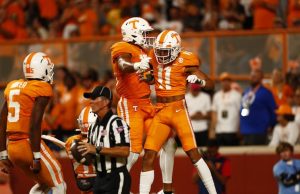 The Tennessee Volunteers’ offense, orchestrated by head coach Josh Heupel and offensive coordinator Alex Golesh, is statistically the best in the country.

Through four games of the 2022 season, the Vols boast the top total offense in the country coming in at 559.2 yards per game.

While Tennessee has had two fairly relaxed games against Ball State and Akron, the Vols have also gone up against two Top 25 teams. Pittsburgh’s total defense sits at No. 35 in the nation and Florida’s comes in just outside of the Top 100 at No. 106.

Tennessee also sits tied for the top red zone offense in the country, which is really a fascinating statistic when broken down. For starters, Tennessee has a 100 percent scoring efficiency on 21 red zone attempts this year, but it’s the Vols’ rushing statistics that stand out the most. The Vols are proven to be dangerous with their rushing game in the red zone with 15 touchdowns on the ground. Tennessee’s three-headed monster featuring Hendon Hooker, Jabari Small, and Jaylen Wright has really been productive near the goal line.

While it’s the ground game that is doing the most damage in the red zone, it’s Tennessee’s passing game that is getting them there in the first place.

Tennessee currently has the second-ranked passing offense in the country at 365.8 yards per game. And, again, this is with half of Tennessee’s games coming against ranked teams. Hendon Hooker has been dialed in this year and, as mentioned earlier, his dual-threat ability has been one of the biggest advantages for the Tennessee offense this season.

More from RTI: Recruits React To Tennessee’s Win Over Florida