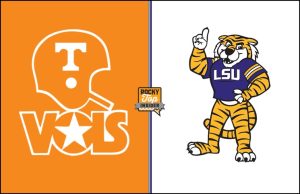 Tennessee is 5-0 and (most of) social media is thrilled about it.

As expected, social media went into a frenzy with the undefeated Vols taking the victory. And with No. 1 Alabama on the horizon this upcoming Saturday, fans are even more excited and riled up.

Here are some of the top social media posts and comments from Tennessee’s win over LSU on Saturday in Baton Rouge.

Tennessee is so back it’s unreal

Tennessee football is the real deal!!!!

Can you imagine what this Tennessee offense is going to look like when Tillman comes back???

Who the hell is number 11 for Tennessee, gotta be a track athlete as well❓

Javontez Spraggins with a tiger in hand! pic.twitter.com/w0qWrWP6jn

Jalin Hyatt: "To be honest, it didn't even feel like we were on the road."

Had no idea who Josh Heupel was when we first hired him and was a little disappointed in the hire at the time… I’ve never been more wrong in my entire life🤦🏾‍♂️ Let’s keep rollin! 🧡@Vol_Football VOLS ON TOP🍊

Tennessee fans are waiting in line to take victorious pictures with the Mike the Tiger statue.

There’s just something special about Coach Heupel and what he’s building at Tennessee.

You just can’t overstate how much Tennessee has needed Josh Heupel. Eight straight 30-point games after offensive inconsistencies for 10 years.
Blowing out an SEC West ranked opponent on the road? Like getting over the “Tennessee” stigma.

Chancellor Donde Plowman has this Tennessee crowd fired ALL the way up to 11. pic.twitter.com/Gp3TCyWp4y

I hate Tennessee. Like arguably the same levels of hatred I have for Clemson. I HATE them.