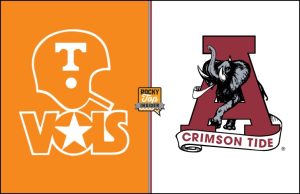 No. 6 Tennessee will host No. 3 Alabama in a heavyweight clash in Knoxville this weekend.

The Opponent: The University of Alabama is the oldest public university in the state of Alabama. The nickname Crimson Tide originated from a 1907 game against Auburn, and the crimson-colored dirt stains that covered the Alabama offensive linemen afterwards. Nick Saban, aka Crimson Jesus, is in his 16th year coaching Alabama. He will go down as the greatest coach in the history of college football. His record coaching against the big boys in the NFL was two games below .500. Alabama has some impressive alumni. I am particularly drawn to actor Michael Emerson, who received a Masters degree in Tuscaloosa. Emerson is best known for playing the role of the mysterious Ben Linus in the television series Lost, arguably the last transcendental network television show. A lot of shows have tried to copy the success of Lost, and failed miserably. A lot of college administrators have tried to copy the success of Alabama football, and failed miserably.

Are they any Good? Yes, Alabama is quite good. The Tide have been the standard bearer for college football for over a decade now, achieving a sustained level of dominance thought to be not possible in the era of scholarship limits. I could list all of their hardware and accolades during the Saban era, but you don’t want to read that. Alabama is very good. Where on the dominance spectrum they presently fall is mostly dependent on Bryce Young’s health. With the reigning Heisman trophy winner, Alabama is a clear favorite to win the national title. With Jalen Milroe, there is a little less certainty.

What will this game tell us about Tennessee? This game will tell us if Tennessee is a legitimate contender. Contender means in the running for the SEC East, which makes you a contender for the SEC Championship and therefore a place in the college football playoff. It all may seem a bit fast for a program who many had written off as dead just 18 months ago, but here we are. To be clear, a loss to Alabama should not diminish the excitement around this program. There is still a very wide talent gap between the two teams, especially the two defenses. A lopsided loss would be somewhat deflating, but that is what this series has become. Tennessee has kept this game within three touchdowns just twice in the past twelve years. I don’t expect many Tennessee fans to be looking for moral victories on Saturday when a real victory is within reach though. Worst case, this game will tell us if Tennessee belongs on the field with a championship contender. Best case, it will tell us if Tennessee is a championship contender themselves.

What does Vegas say? Some books allowed you to bet this game around +14.5 this summer. FanDuel opened it early last Saturday at +9.5, which went to +7.5 fairly quickly. It has stayed at that figure since. That number feels like somewhat of a hedge with Bryce Young’s status up in the air. With a healthy Bryce Young this is likely a 10+ point spread. If we know it is Jalen Milroe then it feels closer to Alabama -3. There has to be at least a touchdown difference between those two QB’s, so the current spread is a guess. Expect it to move significantly once Young’s status is confirmed, probably not until Saturday.

Match up to watch on Offense: Can Tennessee run the ball against Alabama? The Tide have the #1 ranked run defense in the SEC, allowing less than 2.4 yards per carry. They stifled both Texas and Texas A&M this season. Arkansas had moderate success on the ground against Alabama. Tennessee’s running game took a little while to wake up this season, but was fantastic in Baton Rouge last weekend. The Vols rushed for 263 yards against what is believed to be a solid LSU run defense. Tennessee rushed for 227 yards against Florida. The run game was nowhere near as effective in Pittsburgh (91 yards total) and it’s no coincidence that Tennessee failed to score a second half touchdown in that game. It can be easy to stand in awe of Josh Heupel’s offense, but its foundation is still built on timeless truths of football. Staying ahead of the chains is key. It is a big reason Tennessee is converting nearly 45% of its third down chances. You don’t want to be in third and long against a defense like Alabama, and players like Will Anderson and Dallas Turner. They are a big part of the reason opponents are converting less than 23% of third downs against the Tide. Tennessee has not rushed for more than 140 yards against Alabama in over a decade. Typically they have been held under 100 yards rushing. The last time the Vols outgained the Tide on the ground was 2015, an Alabama team that featured Derrick Henry in the backfield. This Tennessee team does not have to outrush the Tide on Saturday, but they need to be effective in running the football. This offense loses some major potency when not balanced.

Match up to watch on Defense: I will stick with the same theme, don’t let Alabama run you over. It is pretty simple. It is a very different Alabama offense with Bryce Young at QB versus Jalen Milroe. The reigning Heisman trophy winner can carve up any secondary with his arm. Regardless though, Alabama is running the football at as good of a clip as we have ever seen this season. Through six games, the Tide are averaging 6.99 yards per carry and 257 yards per game. A big part of that success is Georgia Tech transfer Jahmyr Gibbs, averaging over 8 yards per carry on the season. Gibbs is fast, elusive, and a really solid pass catcher. With all due respect to Bryce Young, he has been Alabama’s best player this season. Even with Young, I expect Alabama to try to hammer the football. They will have to do so against a surprisingly effective Tennessee run defense, allowing less than 90 yards per game and under 3.0 ypc. Tennessee has not been tested like this though. If Jalen Milroe is the quarterback for the Tide, then get ready for 40+ rushing attempts. While still green as a passer, Milroe is a load as a runner. Missed tackles on he or Gibbs can easily result in touchdowns. We have seen opponents chase points against this Tennessee offense so far this year. Billy Napier and Brian Kelly were both uncharacteristically aggressive on offense. Could Nick Saban go another route? Do the Tide try to take the air out of the football, and out of Neyland Stadium, by simply pounding the football and running the clock? It is not a bad strategy against this Tennessee offense. Alabama may be one of very few teams in America that can pull it off. Don’t be surprised to see that tactic if Milroe is at quarterback. Regardless, Tennessee can’t let Alabama run wild inside Neyland Stadium.

Fun Fact: I can not tell you the last Alabama game inside Neyland that I missed. I think it was 1994, which would have put me in Mrs. Williams’ 4th-grade class. It’s been a good streak, and one that sadly comes to an end this weekend. A rescheduled COVID vacation with my wife’s family will take me to the sandy shores of Mexico instead. Specifically, I will be at a Nickelodeon-themed Mexican resort (that doubles as a water park!) with my kids. Who knows if they will even have CBS, but I look forward to screaming, “Tiene Cee-Be-Esse?” in Spanish Saturday morning. Don’t worry, I am not at all bitter about it though. It’s just the biggest game inside Neyland Stadium since my childhood. Meanwhile, I’ll be getting slimed with Spongebob next to the Bikini Bottoms lazy river, that is if the cartels don’t gun me down first. What a time to be alive!

So What Happens? Again, the availability and effectiveness of Bryce Young looms large over this historic rivalry. It is hard to put a point value on Young, but it is easily over a touchdown in my opinion. Jalen Milroe has played six big time quarters of SEC football, and acquitted himself well. Milroe is exactly the type of running quarterback that gave Tennessee fits last year. He is not Bryce Young though, and he’ll be making his first true road start in front of a hostile crowd. The crowd has to be a factor in this game. Thankfully Tennessee’s players went through a dress rehearsal for this just three weeks ago against Florida. How does that experience help them control their emotions on Saturday? We saw these two teams meet as top 10 teams in 2016, and the Vols wilted at the first sign of adversity. I do think Josh Heupel has a more confident, and even keel, team than any fielded by Butch Jones. Heupel is not going to approach this game scared. The same typical clichés apply when trying to pull off an upset. Tennessee has to play sound special teams, and they have to protect the football. The Vols were fortunate to lose none of their three fumbles against LSU. Turnovers don’t get you beat against Alabama, they get you blown out. The stage is set for Hendon Hooker. The Tennessee signal caller can play himself into the Heisman trophy ceremony with a big game on Saturday. For Hooker and this offense though, it is all about playing your game and not worrying about your opponent. Don’t stop and reflect on who the opponent is. That is the exact moment past Tennessee teams have crumbled against Saban’s Alabama. Tennessee will beat Alabama again. It may be this year, next year, or a decade from now. No streak lasts forever. Saturday seems like as good a time as any. It seems perfectly fitting that I’ll be taking body shots off Patrick the Starfish as it happens. Call it a hunch. Call it wishful thinking.
Tennessee 38, Alabama 35