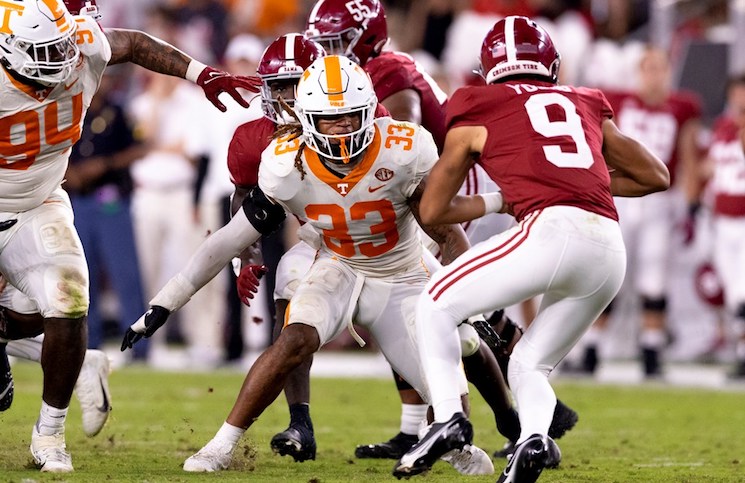 The games keep getting bigger for Tennessee as the Vols cap off a challenging three-game stretch with a matchup against No. 3 Alabama.

We move on to Alabama

Last week, against LSU, I felt like there were several different ways that Tennessee could win, with very few ways that LSU could find a victory. That came to fruition after the Vols’ route of the Tigers in Death Valley. This week, though, I feel much differently.

Frankly, when looking at these two teams, I see reasons why both teams could win this game. Which is what will make this game so competitive for four quarters. You have a Tennessee offense, led by Heisman headline-stealing quarterback Hendon Hooker, currently sitting as the No. 1 offense in the country. Despite not having standout wide receiver Cedric Tillman recently this season, Tennessee has still found two Top 25 wins during that stretch. While Alabama is a different animal entirely, I believe that still carries weight heading into this matchup. And then on the other side, despite injury questions to quarterback Bryce Young and some deficiencies here and there, Alabama still brings a well-rounded, balanced, lethal team that is battle tested and tough to knock out.

Without Bryce Young in the game, if that is what happens, I do think that the advantage swings to Tennessee by a decent margin. Tennessee’s pash rush and front seven should be able to make enough noise against a backup quarterback to hold them back for a bit. But even still, if Young does play, it’s not an automatic win for Alabama. I truly believe that while Alabama is still finding their footing and will be hitting a stride by the end of the season, Tennessee is playing outstanding football in the here and now. Some might even wonder if Tennessee is peaking during this stretch. I do believe that by the end of the season, there’s a strong chance that Alabama will have a better finish than Tennessee. But, strangely enough, I also do feel like Tennessee has the better team right now. The way the coaching staff and players are working together has been ultra-impressive in the last three weeks.

I’m not saying Tennessee is definitively the better team or can guarantee a better finish for Tennessee by the end of the season. But, again, I do believe that Tennessee is playing better football than Alabama right here in the middle of the season. If I’m a fool for this pick, then I’m a fool for the pick. History is not on my side here. But let’s see if Tennessee can keep the momentum rolling in front of what is expected to be the biggest and best crowd that Neyland Stadium has seen since the late 1990s.

This is a challenging game to pick and it starts with who will be behind center for Alabama. Reigning Heisman Trophy winner Bryce Young is questionable to play after missing last week’s game against Texas A&M with a shoulder injury he suffered the week before against Arkansas. If Jalen Milroe, or Ty Simpson, starts for the Crimson Tide then I think Tennessee wins this one. For the sake of my prediction, however, I’m going to assume Young’s playing as I believe that’s the most likely outcome.

Tennessee’s offense will have success in this game. Can they have enough success to outscore Alabama’s balanced offense? I think Alabama is going to score a good bit and force Tennessee’s offense to have a big day against the best defense they’ve seen to this point in the season. For the Vols’ offense the challenge is staying in front of the sticks and out of third-and-long against Alabama’s lethal pass rush. Tennessee ran the ball extremely well last week against LSU. They don’t have to run it that well again but they need to remain balanced.

For Tennessee’s defense, keeping Alabama one dimensional is a major challenge. The Vols have taken away nearly every opponents running game but Jahmyr Gibbs and Alabama’s rushing attack is as good as any in the SEC. We know the Vols will give up big plays in the passing game but can they create negative plays. I expect defensive coordinator Tim Banks to bring lots of pressure and hit the banged up Bryce Young early and often.

Tennessee makes this one a game in the fourth quarter, but Bryce Young and Alabama hand the Vols their first loss of the season.