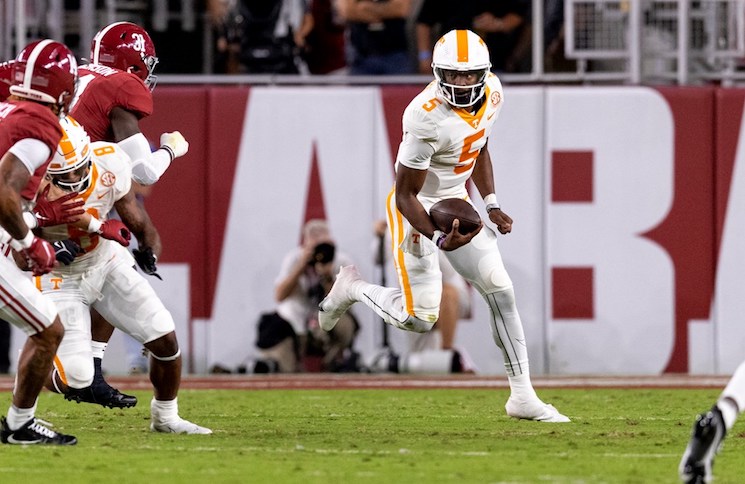 Tennessee faces its toughest test of the season to date Saturday as No. 3 Alabama comes to Knoxville unbeaten. Both teams are undefeated entering the matchup for the first time since 1989 and the excitement matches the game’s magnitude.

Tennessee has lost 15 straight to the Crimson Tide marking back to Nick Saban’s first year in Tuscaloosa. Alabama is 7.5-point favorites in the game while it’s unclear whether star quarterback Bryce Young will play or not.

Stay Ahead Of The Sticks

Alabama boasts one of the nation’s best pass rush led by potential No. 1 overall pick in next spring’s NFL Draft Will Anderson.

The Crimson Tide’s pass rush has ravaged opponents all season. It was on display a week ago as Texas A&M quarterback Haynes King spent much of his night in Tuscaloosa running for his life.

When Alabama gets opponents in third-and-long, out comes the “Cheetah Package”— a lethal pass rush set that includes three outside linebackers.

For Tennessee to win, they need to keep the Cheetah Package on the sideline by staying out of third-and-long. Pitt’s defense has had more success against Tennessee than any other team this season and they did it by frequently putting the Vols in third-and-long.

Tennessee needs to get its run game going for the second straight week to help avoid third-and-long. I expect Alabama to challenge Tennessee by rolling a safety into the box. While the quick passing game and running game will be key to staying out of third-and-long, the Vols hitting some downfield shots early in the game could be extremely effective in opening up rushing lanes.

Teams don’t beat Alabama by kicking field goals. They do it by ending drives in the end zone.

That often puts pressure on Crimson Tide opponents to score on big plays due to the challenges of lining up and running it at Alabama within the five-yard line.

A long touchdown or two will go a long way but the Vols are more than capable than having success against Alabama when the field shrinks. If they continue their success in the red zone this season than Tennessee pulling off an upset victory looks all the more plausible.

Tennessee’s defense has been fantastic against the run this season, ranking second in the conference in yards per game behind only Alabama’s run defense. A week ago, Tennessee held LSU to less than 60 yards rushing and held the Tigers’ running backs to just 17 yards on 12 carries.