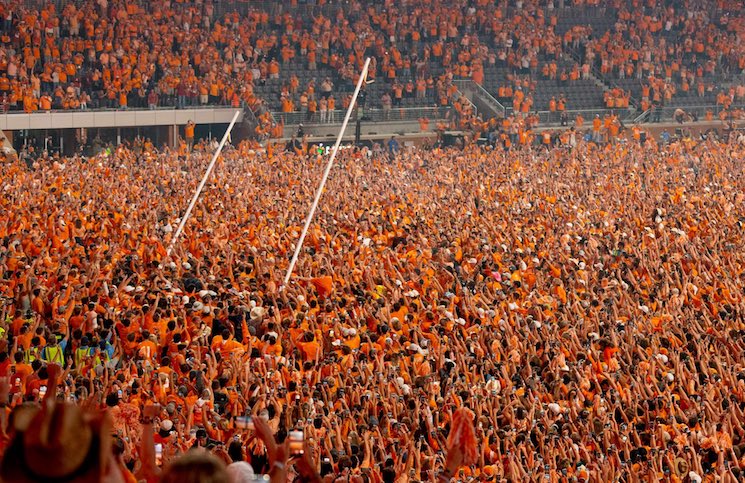 Tennessee fans poured onto Shield-Watkins Field when Chase McGrath’s 40-yard field goal knuckled its way through the uprights in the south end zone of Neyland Stadium.

The scene was reminiscent of another 24 years prior when Tennessee ended a long losing streak to hated rival Florida and fans tore down the uprights.

I was in my mother’s stomach inside Neyland Stadium on that September night 24 years ago and for so many Vol fans in my generation, Tennessee’s, 52-49, win over Alabama was a generational win.

The thrilling victory is Tennessee’s biggest win since that 1998 season which ended with the Vols atop the college football world.

Even Josh Heupel, the normally even keel and laid back coach sensed the magnitude of his 13th win as Tennessee’s head coach.

“During the week, I don’t know if I downplayed it, but I certainly did not recognize it,” Heupel said of the hype around the game. “I felt it and knew it from the moment that I got here. Tonight was for our players, for our former players, for our donors; it is for our fans (too). I know how much this has meant to the people of Tennessee and Vol nation, and (I am) so excited that we came out with the win, for everybody involved. It was a great night.”

More From RTI: The 15 Second Drive That Won’t Be Forgotten

The Third Saturday in October — the rivalry that built the Southeastern Conference — has meant little in the last 15 years. Heupel and his staff made the game mean something again entering the week and truly revived the rivalry with the upset win.

“To be honest I probably got a better sense of it last year,” Heupel said of his understanding of the rivalry. “Walking off the field and seeing the smoke in the stands and understanding the magnitude a little bit. This was the first game I heard about when I got here.”

As fans poured onto the field, decades of frustration poured out of them. As the cigar smoke lifted over Neyland Stadium so did the timidness of Vol fans waiting to completely buy in to Heupel and this team.

A cloud of cigar smoke wafts over a winning Neyland pic.twitter.com/yVJAKXeabS

“Man, what an unbelievable scene,” Heupel said. That thing ends and, shoot, I’m running out in the middle of the field. You can see the swarm of orange coming down. The orange out was phenomenal tonight. The energy from our fans, the student body and our entire stadium was electric.”

For a generation of Tennessee fans, the Vols’ win over Alabama is now the defining moment of their fandom.

They’ll be celebrating it well into the wee hours of the morning.

“You can look on Cumberland (Avenue) and see the excitement and what it means to our fanbase,” Heupel said. “For us, as a team this year, this is just the beginning.”