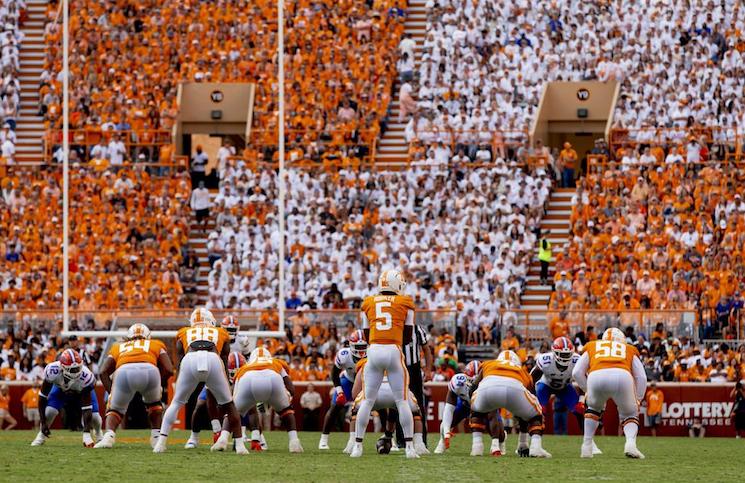 The Vols’ front five continues to play phenomenal football and stepped up against No. 3 Alabama, playing perhaps its best game against the best front they’ve faced all season.

The group kept Tennessee quarterback Hendon Hooker upright throughout the evening. Alabama sacked Hooker once and while they pressured him a handful of times Hooker and Tennessee’s offensive front stayed in control.

The Heisman candidate Hooker’s security guards did strong work against Will Anderson, Dallas Turner and a vaunted Alabama pass rush.

More From RTI: Tennessee Earns A Generational Win Over Alabama

While Tennessee’s pass protection was impressive, it’s run blocking was perhaps better. The Vols rushed for 182 yards. Arkansas’ 187 yards on the ground were the most anyone’s totaled against Alabama this season. No one besides the Vols and Razorbacks have totaled 100 rushing yards against the Crimson Tide.

Tennessee didn’t bust long runs against Alabama — the longest went for just 20 yards and the longest running back carry went for 12 yards. However, Tennessee consistently moved forward on the ground and stayed out of third-and-long.

Getting to third-and-manageable was crucial against Alabama’s impressive pass rush. Tennessee faced third-and-eight or longer just four times in the win in large part due to the consistent push up front.

“Coach Elarbee does a phenomenal job with those guys,” Heupel said. “They continue to grow together. Fundamentally they have gotten better and with communication. We have been fortunate to have guys play at their positions. Our left tackles flip back and forth a little bit, but we have had some consistency.

The success in the run game is a major credit to the four returning starters along Tennessee’s offensive line. The Vols were solid running the ball a season ago but struggled against the likes of Alabama and Georgia.

Tennessee will get a look at Georgia in three weeks but they’ve had success on the ground against nearly everyone else they’ve faced.

As Tennessee’s offense continues to put up major numbers, credit a veteran offensive line that keeps improving and rising to the challenge.