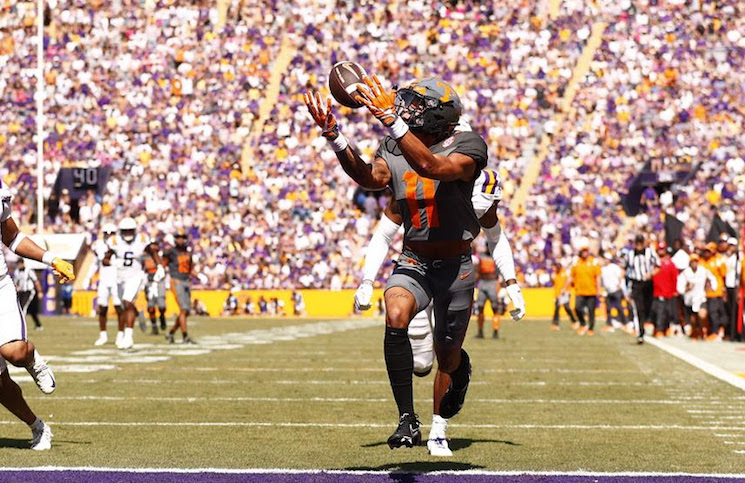 Tennessee receiver Jalin Hyatt caught a lot of eyes across the country last week when he caught five touchdowns in the Vols’ win over No. 3 Alabama.

However, there was on prominent football guy that started paying attention to Hyatt the week before at LSU and is now one of Hyatt’s biggest fans.

Former NFL star receiver Chad “Ochocinco” Johnson was in Baton Rouge on his daughter’s track visit to LSU when he first laid eyes on the junior receiver. Hyatt totaled 63 yards and two touchdowns against the Tigers and it was his 45-yard touchdown that caught Johnson’s eye.

Who the hell is number 11 for Tennessee, gotta be a track athlete as well❓

Johnson played 11 seasons in the NFL, tallying over 1,000 yards seven times. The Bengals’ receiver made the Pro Bowl six times and twice earned All-Pro honors. Johnson was known for his route running prowess and his touchdown celebrations while in the NFL.

Hyatt is known for his speed and it’s allowed him to get past opponents secondaries all season.

What time does my young boul Jalin Hyatt play❓

Even on vacation, Johnson tuned in during the wee hours of the morning to watch the Vols take on the Crimson Tide.

Hyatt made sure it was worth his time. The junior receiver posted one of the best games from a receiver in SEC history, catching six passes for a whopping 207 yards and five touchdowns. The five touchdowns tied a conference record for most in a single game.

Hyatt scores a 5th touchdown against Alabama, wonder if Mel Kiper is watching 💭

Hyatt’s massive performance against Alabama boosted him to the top of national receivers lists and even got him some eyes as a Heisman Trophy candidate.

On top of that, it solidified Hyatt’s spot as Johnson’s favorite receiver in college football.

With Johnson’s support of Hyatt, the former All-Pro receiver wants a Hyatt jersey. There may be a jersey swap coming in the future as the two interacted on Twitter for the first time earlier this week.

I just want a signed jersey from you legend! @ochocinco https://t.co/3UhuFrQEsS

Hyatt and Tennessee return to the field Saturday against UT Martin. Kick off is at noon ET with the SEC Network broadcasting the game.