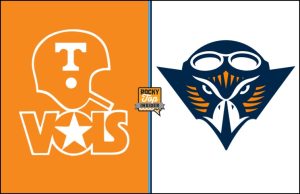 The Opponent: The University of Tennessee at Martin is relatively young in terms of universities. The school will celebrate its 100th birthday in 2027. Between the Great Depression & World War II, UT-Martin struggled to get off the ground in its early years. Martin is now a well established institution in rural West Tennessee, boasting an enrollment of over 6,700 total students. UT-Martin is the alma mater of Tennessee legend Pat Summitt. It is also the alma mater of CNN political commentator Van Jones and Florida State basketball coach Leonard Hamilton. The Skyhawks compete in the Ohio Valley Conference at FCS level in football.

Are they any Good? No, UT-Martin is not good when compared to Tennessee. To be fair to the Skyhawks, this is a solid FCS program though. It is probably a pick ’em if they play Akron on a neutral field. UT-Martin won the Ohio Valley Conference last season, and even advanced in the FCS playoffs. It is a well run program, led by Jason Simpson. It is still an FCS directional school though. Surprisingly the Skyhawks and Volunteers have only met once before. Tennessee defeated UT-Martin 50-0 under first year head coach Derek Dooley. Can anyone guess who scored the game’s first touchdown? I would be thoroughly impressed if you knew the answer without looking it up…..David Oku.

What will this game tell us about Tennessee? This game does not tell us anything new about Tennessee, at least not about its starters. It will give us some indication of how the Vols handle success after a historic win versus Alabama. Do they come out focused and ready, or is there some understandable hangover? They are winning this game either way, but it will be interesting to watch. Most importantly it is a chance for underclassmen to show what they can do. It is good game experience for players who have not seen much this year. Who takes advantage of the opportunity?

What does Vegas say? It says that you have a real problem if you are hunting around for a line in this game. Typically you won’t see betting lines versus FCS opponents, and that appears to be the case here. I’ll put the spread at -49.5 if you want something to follow though.

Match up to watch on Offense: This could be the last time we see several potential starters for next season’s team in any extended action. At the forefront of that group is Joe Milton, who will be the odds on favorite to start the opener against Virginia next season. How does his accuracy look, especially on deep balls? Hopefully we see more on young skill position players like Dylan Sampson, Justin Williams-Thomas, Walker Merrill, and Squirrel White. Finally, the Vols are fortunate that they have not needed much depth along the offensive line thus far. We will see veterans like Ollie Lane and Dayne Davis. What do we see from young linemen like Mo Clipper or Addison Nichols though? The offensive line have been the unsung heroes of Tennessee’s season so far. You can never stop developing depth within that unit. I’ll be watching how that second string line performs on Saturday.

Match up to watch on Defense: Depth is starting to get scary in Tennessee’s secondary. The Vols obviously ended the Alabama game with a walk-on on the field at cornerback. Thankfully several of these injuries appear fairly minor, but expect a number of players to be out this weekend. Whoever does play will get a decent challenge from a Skyhawk passing game ranked in the Top 10 nationally in FCS football. Martin throws the ball for nearly 300 yards per game. It could create a fun challenge for some younger players. I will be looking for more of Dee Williams, Wesley Walker, Andre Turrentine, and Christian Harrison. Guys like Dee Williams will likely be needed down the stretch of this season, and some have not seen much action this year. Saturday is a good opportunity to get their feet wet against a solid passing game. It would also be nice to see extended snaps from some young defensive linemen like Tyre West and Jordan Phillips. Tennessee will need to put some pressure on Skyhawk quarterback Dresser Winn. He is a solid, senior quarterback who will find open receivers if given time.

Fun Fact: UT-Martin has had somewhat of an identity crisis when it comes to nicknames. The school has been the Skyhawks for a little over 25 years. Prior to that, they were the Pacers for a few decades.  However the school’s original nickname was the Volunteers. Apparently at some point however, coaches and players got tired of being called the Baby Vols.

So What Happens: In short, whatever Tennessee wants. I think the Vols could almost name the score in this game. I do expect a little bit of a hangover. It is a noon game against FCS school, coming on the heels of huge wins over LSU & Alabama. How could there not be? Tennessee’s starters should play the majority of the first half, but hopefully no more than that. Games like this create a tricky situation when you are trying to win your quarterback the Heisman trophy. They shouldn’t matter at all, but padding stats never hurt. Hendon Hooker is very much in the Heisman trophy race. Can Tennessee get him a few quick touchdowns without taking any contact? That should be the goal. Everybody needs to stay healthy in a game like this. Otherwise it is Homecoming. It is a fun celebration for a program that deserves celebrating. Expect plenty of scoring. Expect mistakes as Tennessee shuffles through its depth chart. This game may end up being closer than it should be, and that is fine. I’ll say Vols 59, Skyhawks 17