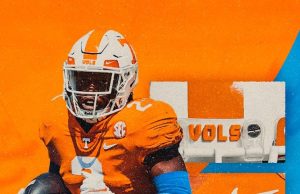 Tennessee has announced a twist for their uniforms this upcoming Saturday against UT Martin. Photo via @Vol_Football on Twitter.

The University of Tennessee is celebrating Homecoming this week, which will be capped off with No. 3 Tennessee hosting UT Martin on Saturday at noon eastern time.

As far as Tennessee’s uniforms go, the Vols will be going with a combination to match the rich traditions of Homecoming in Knoxville… but with a twist.

As announced by Tennessee’s Twitter account on Thursday evening, the Vols will be going with the home all-orange look which includes orange jerseys and orange pants to go along with the white helmet. However, by the look of the image, Tennessee will also be adding Summitt Blue accessories into the mix.

In addition to Homecoming, Saturday’s game will also be celebrating the 50-year anniversary of Title IX on campus. The Summitt Blue color also honors longtime Lady Vols head coach and innovator in the sport of basketball, Pat Summitt. UT Martin served as the alma mater for the iconic Tennessee head coach.

Earlier this year, four women’s teams representing the University of Tennessee announced brand-new Summitt Blue alternate jerseys. The Tennessee soccer and volleyball teams have already debuted them last season with the basketball and softball teams set to follow in the winter and the spring. The slick new alternate jerseys feature a Summitt Blue base with orange accents and lettering.

A new kit to honor a legacy 🔵 pic.twitter.com/NMoikc8oqu

This will be the second time that Tennessee has gone with the all-orange uniforms this year. The Vols first wore the look during the September home game against Akron in Neyland Stadium.

The Vols’ primary home uniform this season, the traditional orange-and-white set, has been worn three times against Ball State, Florida, and Alabama.

While we are getting some form of variation this Saturday, we now know that this won’t be the week for the Dark Mode alternate uniforms. Although it does seem like next weekend’s pre-Halloween night game in Neyland Stadium could be the answer to that question.

Tennessee did wear the alternate Smokey Grey uniforms against LSU, making it unlikely that we will see those return this season.

More from RTI: Why Tennessee’s Offense Is So Efficient In The Red Zone